Hexcells is a game based off of Minesweeper played on hexagons. (Full disclosure: I have nothing to do with Hexcells. In fact I don't really like the game.) Most of Hexcells rules can be pretty easily expressed in Generalized Minesweeper (Minesweeper played on an arbitrary graph). The one that is most difficult is the {X} and -X- rules.

The {X} rule tells us that a cell borders X mines and that all of these mines border each other in a continuous path. For example if we had the board:

The 6 possibilities for mine placement would be

Your goal is to implement the rule {3} in generalized Minesweeper.

Generalized Minesweeper is Minesweeper played on an arbitrary graph. The graph has two types of vertex, an "indicator" or a "value". A value can be either on or off (a mine or a dud) however its state is unknown to the player. An indicator tells the player how many adjacent vertices are on (mines) and does not count as a mine itself.

For example the following board for Generalized Minesweeper tells us that cells A and B are either both mines or neither of them are mines.

Unlike in normal minesweeper where you click values that are off to reveal indicators, there is no such mechanic in Generalized Minesweeper. A player simply determines for what states of the graph can satisfy its indicator.

Your goal is to build a structure in Generalized Minesweeper such that there are 6 specific cells that can only have states that fulfill as if they were connected with the Hexcells rule {3}. When you write your solution you should not have specific values in mind for value cells. (In answer to H.PWiz's question it is allowed that some value cells might be deducible from the state, but you can always improve your score by removing such cells)

You answers will be scored by the number of vertices in the final graph minus 6 (for the 6 inputs) with a lower score being better. If two answers tie in this metric the tie breaker will be the number of edges.

This problem is solvable, I have a solution to this problem and I will post it once this challenge is a week old. 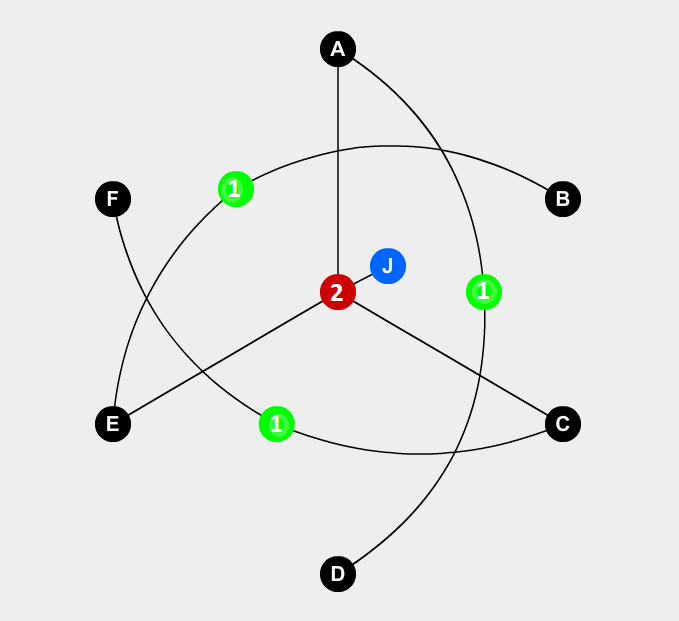 (Graph made with this online tool and paint.)

A-F are our six nodes, and J is a helper node. The three 1-nodes enforce that opposite nodes are different, while the 2-node makes sure that A, C and E can neither be all mines, nor all empty.

Where ? is a value cell, that is not one of the 6 we care about, we need the following subgraph.

My ASCII-art skill are dreadful.

With the cells corresponding to the following hexagon, all we then need are 3 more indicator cells A-1-D, B-1-E, C-1-F

First, we start with a ring of 6 value cells all connected to a 3. These cells will be the cells with the {3} rule.

Then, we attach 012 sensors to the value cell pairs (AB,BC,CD,DE,EF,FA). The structure of the 012 sensor is below.

A and B are the inputs to the sensor and O is the output. The ? cells are generic value cells. O will be a mine if exactly one of A and B is a mine and empty otherwise. Then, we connect a 2 node to all the sensor outputs. This ensures that there are exactly 2 pairs with exactly 1 mine, and it can be proven that the only configurations that satisfy this are the ones that satisfy {3}. Each sensor takes 7 nodes, so 6 sensors requires 42. Add the 3 node connected to ABCDEF and the 2 node connected to the outputs and you get 44.

This solution can also be adapted for {1}-{5} by changing the 3 node to some other value.

Not the answer you're looking for? Browse other questions tagged game graph-theory atomic-code-golf or ask your own question.