The making of "Spot It!": Finding almost unique sets

Inspiration: This puzzle was inspired by wondering how the makers of the card game Spot It! came up with a deck of cards that differ from each other by only one picture. If it helps, the game's instructions say it contains 31 cards with at least 30 unique pictures.

Brute-force reference implementation: (Entirely impractical for use at the scale of the contest judging criteria, but perhaps useful for thinking about the problem.)

Edits: Reworded puzzle to correctly articulate the intent that the goal is to find a deck that matches the constraints. Added the missing constraint that no two pictures on a card may match. Changed contest type from code golf to speed.

This should be a comment rather than an answer, but it's not going to fit in a comment.

One way of looking at this problem is to flip it around:

Given that you have N distinct pictures, what's the largest deck of cards you can build each of which has n distinct pictures such that the intersection of any two cards is precisely one picture?

Another way of phrasing this flipped-round problem is:

What is the maximal size of binary code of length N, constant weight n and exact pairwise Hamming distance 2(n-1)?

This is bounded by the maximal size of binary codes of length N, constant weight n, and minimal Hamming distance 2(n-1). The best resource for such bounds appears to be http://www.win.tue.nl/~aeb/codes/Andw.html although some values here are extracted from OEIS (specifically A001839).

There are some easy to prove properties, but from what I've read so far it seems that in general there's no better method known than brute force.

One useful result which handles the case that most interests you is as follows. (I could also write some code to wrap this up by using special cases and falling back to brute force, but I don't see the point).

If N = n^2 - n + 1 then there is a nicely structured deck of N cards satisfying the required property.

The construction is quite simple:

Each element appears in precisely n cards, which makes it optimal for decks in which more than one picture repeats.

Call the most frequent picture (selecting arbitrarily in case of a tie) f.

If f appears in more than n cards then it must appear in every card, and no other element repeats.

Proof: because each pairwise intersection contains precisely one element, all of the other elements in the cards containing f must be distinct. But then a card which doesn't contain f must have a non-trivial intersection with more than n disjoint sets despite having only n elements, which is impossible.

Excluding f from the N available pictures we get N-1 from which to draw disjoint sets of size n-1 to complete each card.

Consider an arbitrary card containing f. By definition of f, none of the n elements of that card appears in more than n cards, and since each appears in that card the number of other cards is no more than n(n-1). Hence the deck cannot be larger than n(n-1) + 1.

By combining the corollary and lemma 2.

Because I view this question as primarily a challenge question, I'll describe how an approach can be developed. I'll present the code in ungolfed format in the hopes that it might shed light on how the solution was constructed. Perhaps I'll add a golfed version later.

Throughout I'll illustrate using the example of the deck of 7 cards, each having 3 pictures on it.

Whatever the size of the deck, the problem calls for a complete graph. If each vertex or node in the graph represents a distinct card from the deck, there should be a single link or edge between each vertex. This corresponds to the constraint that any pair of cards shares a single picture. 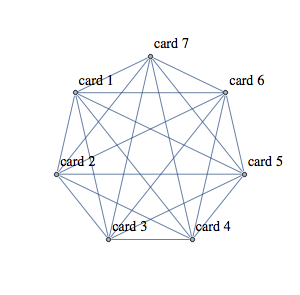 Another way to express this it through an adjacency matrix. Rows and Columns correspond to cards. A cell (i,j) with a 1 in it indicates that card i has one picture in common with card j. No cells can contain an integer greater than 1 (that would mean that cards i and j share more than one picture). The diagonal consists of zeros; there are no links from a card to itself.

Which pictures are in each card?

Below we include additional information that was not in the above diagrams. And in fact this is not the only possible solution. Even if you accept that this constitutes one viable deck of 7 cards and 7 pictures, we might have stumbled upon it by chance. We need an approach that will work for any number of pictures and cards.

Filling in the Complete Graph

We may as well use the preceding picture to fill in information in the complete graph. Remember, we haven't solved anything. We're merely explore different ways of thinking about a specific solution, once found. 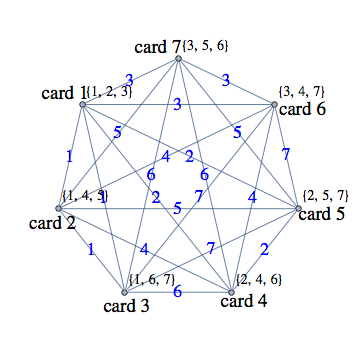 Matrix of Cards by Pictures

Let's represent the above illustration in a another matrix. This time, the rows represent cards; the columns represent pictures.

By studying the distribution of pictures to cards (where the 1's appear in the matrix) we can identify a procedure that will guarantee a full deck. (Be sure to see Peter Taylor's analysis of why a pictures per card can produce a maximum deck of a(​a​-1)+1 cards using a total of a(​a​-1)+1 pictures.) In the example, 3 pictures per card suffice to make a deck of 7 cards.

Steps for making a deck of Spot It! cards.

Edit: Updated to allow creation of additional pictures as needed (so it no longer fails). Also added sample runs.

The results for 4 pictures per card looks good for the square part of the matrix. However, the matrix gets sparse as columns are added:

Or is it just an anomaly at that size? The matrix is square and well filled for 5 pictures per card:

On the other hand, at 6 pictures per card (also even), it's back to sparse again at the tail. Have we really minimized the number of unique pictures?

Not the answer you're looking for? Browse other questions tagged fastest-code number-theory combinatorics or ask your own question.

14
Fast Topswops calculation
5
Analysing the most common words in a text, and replacing them with a single byte
27
Golf me some cash from the ATM
16
Find all the Solutions to this Number Puzzle in the Shortest Time Possible
18
Hold'em or Fold'em?
18
How many shuffles
19
Is it a shuffle?
11
Count arrays that make unique sets
34
The fastest Sudoku solver
7
Compute the size of intersections of sets