Here's a challenge involving truth tables and binary operations. For this specific challenge, your task is to use the following table of operations:

To create a function that takes in two inputs f(p,a), where p is the initial truthy/falsy value and a is a list of tuples representing multiple values of q and the operations to be performed. For instance, f(T,[[T,0],[T,1]]) would return ContradictionOP(T,T)=F. You would then chain the output of this result into the next operation, which would be LogicalNOR(F,T)=F, where the 2nd p is the previous output of F. The final result being false. A better breakdown of what each operation actually is is described below: 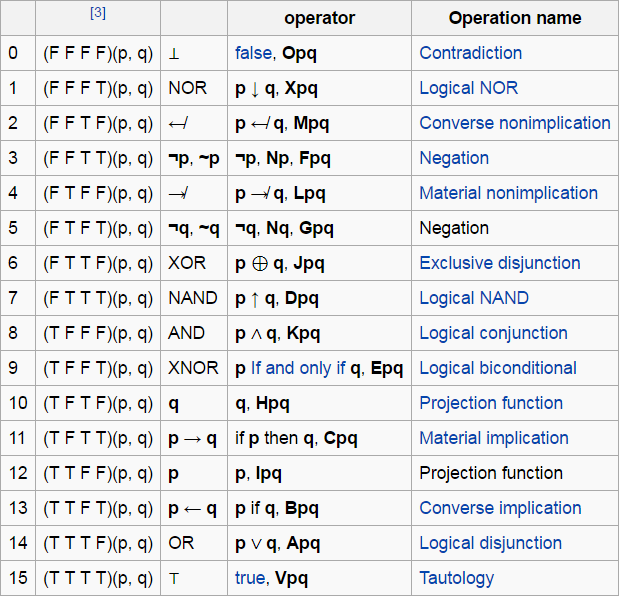 The first part should be rather simplistic in nature, as the operators are arranged in an increasing binary pattern (hint, hint). However, recursing through the additional inputs to chain binary operations is probably the harder part to accomplish.

Online demo. This is an anonymous block (function) which takes the two values on the stack and leaves the result on the stack.

Not the answer you're looking for? Browse other questions tagged code-golf binary or ask your own question.

20
Implement bag operations
8
Is it truthy or falsy?
32
Is it true? Ask Jelly!
67
Is this even or odd?
40
Am I divisible by double the sum of my digits?
17
Binary Substrings
16
The Binary Fences
67
Is it a Cyclops number? “Nobody” knows!