Given a string, Return its Cumulative Delta [duplicate]

For a 3 letter string, your pathway should be similar to

Take a string input through any Standard IO Method, and output the value of the cumulative delta as described above.

Test it on Ideone.

Test it on Ideone.

Proposition Let f be a variadic function that maps the code points s0, ⋯, sn to their cumulative delta with sign (-1)n, i.e.,

By the recursive definition of f and the hypothesis, 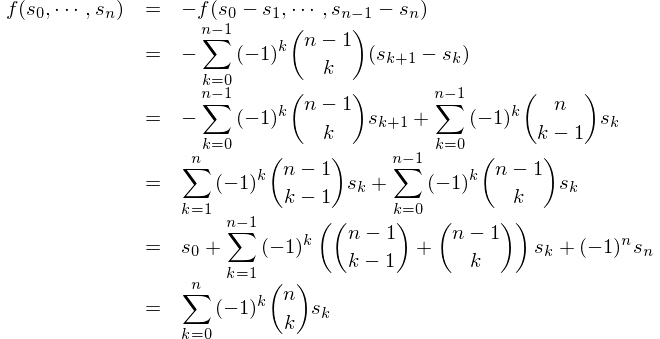 By induction, the statement holds for all non-negative values of n.

we can rewrite the proposition as follows.

The iterative implementation does precisely this. Numerators are computed by incrementing k, denominators by subtracting k from the length of the input string s, i.e., n+1.

Unfortunately, not all fractions will evaluate to integers, so the result is computed using floating point arithmetic and finally rounded to the nearest integer.

The recursive implementation does roughly the same, but it keeps track of the denominator via the auxiliary variable k and computes the numerator by subtracting 1 from the length of the remaining string (~-len(s)).

Try it Online! or here is a slightly modified version for all test cases.

-2 bytes thanks to @Dennis (implement a while loop)

Saving 7 bytes thanks to Dennis.

Requires input to be given in quotes, e.g. "helloworld"

I used (A version of) this script to test the question itself. I thought I might as well share it.

map fromEnum turns the string into a list of ascii values. If it has only a single element, return it, else build neighbor differences and check again.

Good that the input is more than 1 char so I can use s.length for both Arrays and Strings!

Snippet referenced from Neil's answer on another question :P

This is 97 bytes of code, plus 3 bytes for the -a flag, which enables ASCII input.

This would be a lot simpler if we didn't have to worry about the difference between characters sometimes being zero. Instead, we have to muck around with reversing the stack and pushing stack height several times.

diff() in R works differently than the difference defined in this challenge. Therfore we have reverse the vector (using rev) prior to taking the difference the first time.

Not the answer you're looking for? Browse other questions tagged code-golf string number arithmetic array or ask your own question.

7
Minimum base to count to a string
46
AlTeRnAtE tHe CaSe
21
Fizz-Buzzify a String
35
Multiply a string by a number!
37
Is this string a letter doing a cartwheel?
26
Simple String Reflection
19
Divisible strings