In 1870 Émile Baudot invented Baudot Code, a fixed-length character encoding for telegraphy. He designed the code to be entered from a manual keyboard with just five keys; two operated with the left hand and three with the right: 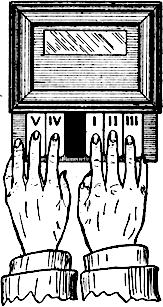 The right index, middle and ring fingers operate the I, II, and III keys, respectively, and the left index and middle fingers operate IV and Ⅴ. (Henceforth I'll use their Western Arabic numerals, i.e. 1, through 5.) Characters are entered as chords. To enter the letter "C," for example, the operator presses the 1, 3, and 4 keys simultaneously, whereupon a rotating brush arm reads each key in sequence and transmits a current or, for keys not depressed, no current. The result is, in modern terms, a 5-bit least-significant-bit-first binary encoding, in which our example, "C," is encoded as 10110.

You might be thinking that 5 bits, which can express at most 32 unique symbols, isn't enough for even all of the English letters and numerals, to say nothing of punctuation. Baudot had a trick up his sleeve, though: His character set is actually two distinct sets: Letters and Figures, and he defined two special codes to switch between them. Letter Shift, which switches to Letters mode, is activated by pressing the 5 key alone (00001), and Figure Shift is activated with the 4 key (00010).

Your challenge is to write a program or function that decodes Baudot Code transmissions.

A real transmission would begin with some initialization bits, plus a start and stop bit before and after each character, but we're going to skip those and only worry about the 5 unique bits for each character. Input and output formats are discussed below.

The last three rows in the right column are control characters:

Here's an example with Figure Shift, Letter Shift, and Space:

For your convenience, here are the characters in a format that's perhaps easier to digest in an editor, sorted by code:

Input will be a string, array, or list of bits in least-significant-bit-first order. Each character will be represented by a quintet of 5 bits. Bits may be in any reasonable format, e.g. a binary string, an array of 0s and 1s, a string of "0" and "1" characters, a single very large number, etc., as long as it maps directly to the bits of the transmission.

Every transmission will have at least one printable quintet and at most 255 quintets (printable or otherwise), i.e. 5–1,275 bits inclusive.

The input can contain only the bits of the transmission, with two allowed exceptions: Any number of leading or trailing 0 bits and/or, for string input, a single trailing newline may be added to the transmission. Leading or trailing bits or characters cannot be added before or after each quintet, i.e. you cannot pad each quintet to 8 bits (or take each quintet as a single number in an array—unless your language has a 5-bit integer type) or separate quintets with any additional bits, e.g. "01111\n11100".

Output may be in any reasonable format, the most reasonable being ASCII (or UTF-8, for which all of the represented characters are the same as ASCII). Please indicate in your answer if your output is in another encoding or format.

This is code-golf. The shortest code in bytes wins.

The code contains unprintable characters, so here is a reversible xxd hexdump:

Quite long, but the lookup table does take up most half of the space.

Or, for 93 bytes, with no compression on the lookup table:

Takes input on STDIN. Since Batch has no binary conversion, I have to fake it using octal and hex conversion.

It's a big'n, but was quite fun to write.

Note: Erasure uses the ASCII backspace character (\x08), which means that they'll look funny in TIO, but they look fine in, say, xterm.

At the top, above the = line, is the input decoder. It turns the input into one of 32 separate signals. These are sent from the o's above the = to those below.

The triangular mountains of L's and R's just rotate the pattern from separate rows to columns. The grid below that translates each column to its output character. For unknown signals, NUL (\x00) is produced. For the special shifts, instead of printing a character, the little blob to the right changes the mode.

The cable-car like thing between the two mountains suppresses any printing between each quintet, otherwise, this would attempt to decode all overlapping quintets too. Try replacing the ! with a * to see this for yourself. (Running in verbose mode -v may also be of interest here.)

I'm not sure how to make this smaller at the moment; it's already quite dense for its size.

Looking over old challenges I realized this one would be pretty easy with sed, and good for practice. I haven't attempted any compression, so the lookup table is more than half the code.

The code works in two phases: First, it replaces each run of 5 binary digits with the corresponding two characters (letter and figure) from a lookup table. The lookup table is in the format 𝟎𝟎𝟎𝟎𝟎𝐋𝐅𝟎𝟎𝟎𝟎𝟎𝐋𝐅… where 𝟎 is a binary digit and 𝐋 and 𝐅 are the corresponding letter and figure, respectively. % stands in for missing characters (this could be any character other than newline). FS/SP is represented by f<space> and SP/LS is <space>l. ER is represented by <<.

Then it steps through each pair with a "cursor" corresponding to the current mode—# for letter mode, @ for figure mode. The # cursor removes the second character of the pair and then advances to the next pair, and the @ removes the first and advances. In other words, #A1B8 becomes A#B8 and then AB#, and @A1B8 becomes 1@B8 and then 18@. When the # cursor encounters f<space> it deletes it and replaces itself with the @ cursor, and vice versa when @ encounters <space>l.

When no pairs remain, the final cursor is removed along with any characters followed by <.

Not the answer you're looking for? Browse other questions tagged code-golf binary encoding or ask your own question.