As if this challenge could be any more Pythonesque in spirit... No prior knowledge of Markov chains or encryption techniques is required.

You are a spy who needs to obtain some crucial information from the British security service M1S. The agents of M1S are well aware that their Wi-Fi signals can be intercepted, their Android/iOS security vulnerabilities exploited etc., so all of them are using Nokia 3310’s to transmit text information which is typed using the T9 auto-completion.

You had previously hacked the phones to be delivered to the intelligence agency and had installed keyloggers under their glorious plastic keyboards, so now you receive sequences of numbers corresponding to the letters they typed, so “the eagle has left the nest alert the agents” becomes

But wait! Some T9 sequences are ambiguous (“6263” could be “name”, “mane” or “oboe”; the more obscure, the more suspicious it gets!), so what do you do? You know that the only entrance examination M1S uses is summarising Marcel Proust’s masterpiece “Remembrance of Things Past” in 15 seconds, so you want to pick the word that comes next after the previous one according to its frequency distribution in the entire chef-d’œuvre of Proust!

Can you crack the code and obtain what could be the original message?

The principle of T9 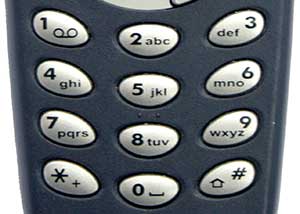 The T9 auto-completion mechanism can be described as follows. It maps alphabetic characters to numbers as shown on the picture above.

The T9 decryptor receives a sequence of digits and tries to guess the word that could be typed with those keypresses. It might use a standard frequency table, but we are going one step further and predicting the next word using a Markov chain!

The corpus is this heavily stripped version of Proust’s “Remembrance of Things Past” (s/-/ /g, s/['’]s //g and s/[^a-zA-Z ]//g — begone confusing possessive 's!) originally published on the University of Adelaide website (the text of this work is in the Public Domain in Australia).

The whole text must be analysed as one string, as one long sentence, as one long vector of words (whichever is more convenient for your language), stripped of linebreaks, and split into words at spaces. (I do not supply a single-paragraph file because such might be frowned upon by github tools.)

How do I read the whole text as one string / sentence? An example in R:

Given a sequence of digits as a number, return a possible text string that could be typed using the corresponding T9 keys using a probabilty chain to predict the next word X based on this training text treated as one long sentence.

If X is the first T9-word of the text and there are multiple guesses, pick one at random, otherwise pick the only one possible.

For all subsequent T9-words X(i) preceded by a word already deciphered w(i-1):

Example 2a. If the message is 76630489, where 489 could be guy or ivy (they occur in the corpus at least once), 7663 can be deciphered as some (a very probable first word). If some is never followed by anything that maps to 489 in the corpus, then pick guy or ivy at random with probability 0.5.

Example 2c. Suppose that you want to decipher the sequence 536307663. 5363 was predicted as lend. 7663 could be any of these: pond, roof and some. You count the occurrences of the word following lend in the sample corpus. Suppose you get something like this (just to illustrate):

You may safely assume that the agents use only a-z letters and spaces (no punctuation marks, no possessive 's, and no numbers).

You may also assume that the agents of M1S never use any words outside the scope of “Remembrance of Things Past” (which is a whopping vocabulary of 29,237 words!).

The T9 fuctionality was implemented in this challenge, so you might have a look at it.

If you need any help, probabilistic chains were gloriously tamed in this, that and the following challenges, but you do not even need to know the principle of such chains: everything is stated in the task.

You need to stay as discreet as possible, so the shortest code wins!

P.S. The obvious benefit of this probabilistic algorithm is the fact that the probability you will get a true original string for an ambiguous deciphered string tends to one — just wait...

R solution, non-competing illustration of what can be done

Firstly, we load the sequence of words into the memory:

Secondly, we need a function that T9-ifies any text:

Final preparation: we split the input string at zeros using a function that we call prep):

And now I propose a function that takes any input string of numbers, preps it and deciphers the words one by one:

And now what it is actually doing:

Please do not comment that this can be golfed. Seems that few people are interested in this challenge because of my terrible verbosity, so I posted this answer to show what a possible programme could look like. You need not upvote/downvote this answer.

Not the answer you're looking for? Browse other questions tagged code-golf string cipher markov-chain or ask your own question.