This puzzle is derived from CodinGame SamSi's "Heart of the City" puzzle.

You decide to take a walk in an n * n tile city and go to the center tile. All of the buildings are infinitely small, but you have super vision and can see everything close up and far away.

Mark each building visible with *. The building is visible iff it is not blocked by another building on the exact same line of vision.

In other words, if @ is the origin, the building is visible iff the x-coordinate and the y-coordinate are co-prime to each other.

Remember, this is code-golf, so the answer with the least bytes wins.

Excel turns out to be very handy for this challenge and there are combination of Excel formulas to get the exact pattern as the OP's shown for a given input. Luckily enough for me, Excel has a GCD function - a built-in formula to return greatest common divisor of positive integers so I don't have to create one using Euclidean algorithm. Why do I need a GCD function here? It's because two numbers are called coprime, if their greatest common divisor equals 1. The numbers here is the coordinate of the position, x and y, relative to the origin, @. Here is the Excel formula

To automate the process and to reduce the use of characters, we can use VBA since it's integrated with Excel. First thing first, set a worksheet Excel like the following: 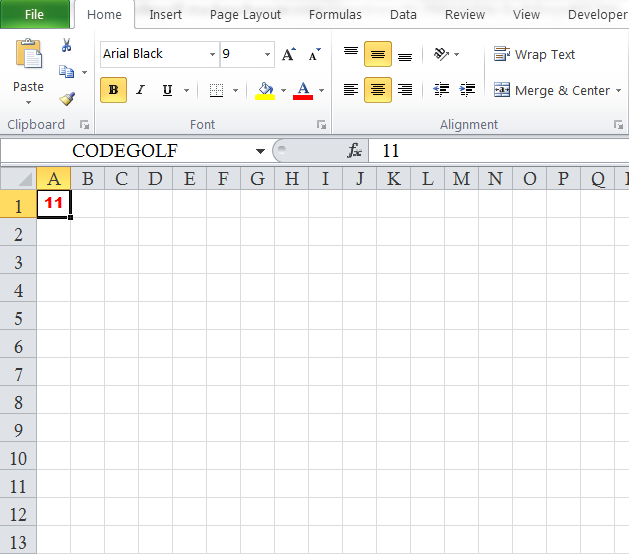 Then put the following code in the Immediate Window

Figure below is the example output for the input n = 11 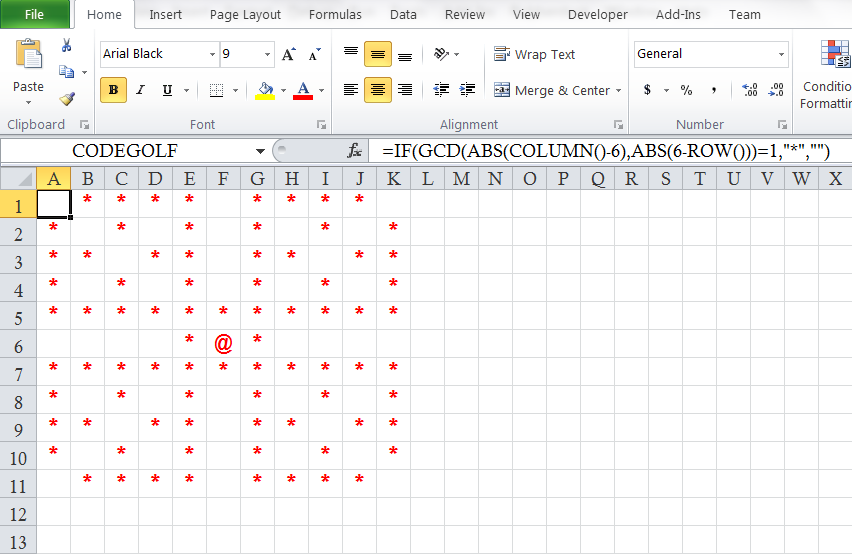 I set the font color to red to make it look more attractive. Even better 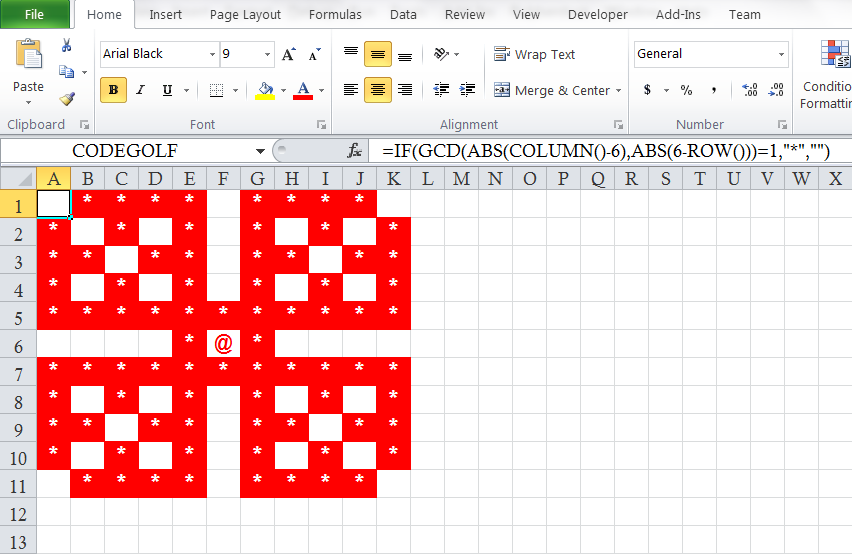 A port of Dennis' answer in Jelly.

If it is acceptable to return the output from a lambda as a list of lists of 1-character strings (74 bytes):

Port of my answer in C.

2 bytes thanks to Dennis.

10 bytes thanks to Arnauld.

2 bytes thanks to H Walters.

This started as a port of Leaky Nun's C version and was then further optimized. Most optimizations are specific to JS.

I'm very new to Pyth, so this can likely be golfed further.

Not the answer you're looking for? Browse other questions tagged code-golf math ascii-art or ask your own question.

42
Halloween Golf: The 2spooky4me Challenge!
21
Gamma Function Golf
86
“99 Bottles of Beer”
42
Product over a range
18
Product over exclusive and inclusive ranges
30
Subsequence Substitution
20
Make me a blanket!
80
Output the sign
23
Round up my number