If the program is started,

No input, and no other outputs are allowed.

The randomness must be fair: it must have a uniform probability distribution. This means an uninitialized variable (or a RNG without seed) MOD 6 will not be sufficient.

If the solution works with only one dedicated operating system / platform, you will receive a 6 byte penalty to the score.

Throws : System.ArgumentException 'Dir' function must first be called with a 'PathName' argument.

Throws Attempted to divide by zero. if a random number in the range [0,6) is 0.

Utilises the idea from this answer of using os.urandom, but we save some bytes by avoiding the ord call.

In C++, delete behavior is that on 0 ( or nullptr ), nothing occurs

Not as cool ( nor dangerous ) as CommitStrip's russian roulette

Works by passing a wrong type to the print function if Random.nextInt(6) is 0.

Hexdump of the class:

Must to be run with java -noverify to prevent Java from realizing that the class is messed up.

Also it's very wrong this time but CFR output for fun:

Floating point exception when rand() is divisible by 6

! followed by nothing doesn't trigger history substitution. $[...] is alternative syntax for arithmetic. (...) is a subshell.

This solution is portable. bash itself does fork but doesn't exec any other programs.

Throws an exception to crash.

With some better handling of dictionary fetches, this could probably be 2-3 bytes shorter, but that's not getting implemented within the immediate future.

Approx each 6 time, there is a warning: division by zero error: index (inf): subscripts must be either integers 1 to (2^31)-1 or logicals

Bonus answer that allocates 2^60 bytes of memory instead of dividing by 0:

As Commodore keyword abbreviations, you may enter it as follows:

I found a six-tokenised byte saving by not using the INT keyword when assigning a value with RND and CBM BASIC will automatically convert the key value to it's integer by ignoring the decimal places.

Firstly, we set up a$ as a string and we later use it as an array; in Microsoft [Commodore] BASIC that appeared on the PET, VIC-20, C64 etc... you can set up the first 11 elements of a zero-indexed array without expressly declaring it first, though it saves space on the variable stack if you do and you have fewer than 11 elements.

So our string array of six elements are set to the string literal of i survived. One of those elements is randomly reset to an empty string.

The x variable is then used to select which of the six will be displayed (one of which is empty). Finally, we try to divide the length of that element with itself; usually this would produce an output of 1 except where the string length of the element is 0, so 0/0 will produce an error (one in six chance) and halt the execution of the symbolic listing; otherwise, the print command moves the cursor position back two spaces to overwrite the output with the string literal of the array element x, or i survived.

This answer assumes that the division by zero error reported by BASIC (which halts the programs execution by the interpreter) is acceptable as the program crashing as cited above. 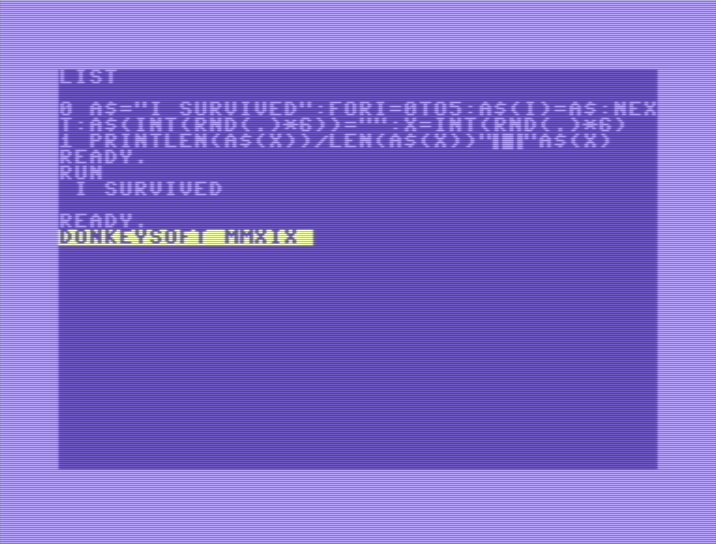 Nothing too special here. Just an IP that picks a random number [0-6) and prints the required string if the random value isn't 0.

Required string contains two vs which also creates an IP each that get terminated after 100k execution steps (otherwise TIO would produce instant results and the > wouldn't be needed).