Can you outgolf me? (Robbers section)

The cops section can be found here.

Your task is to outgolf the submissions of the cops in the same language and the same version (for example, Python 3.5 ≠ Python 3.4, so that is not allowed). A submission is outgolfed when the length in bytes is shorter than the original submission. You only need to golf off at least 1 byte in order to crack a submission. E.g. if the task was to perform 2 × n, and the submission was the following:

You could outgolf the cop by doing the following:

Or even this (since lambda's are allowed):

In that case, you have cracked the submission.

The person with who cracked the most submissions is the winner.

This challenge is finished. The winner of the Robbers section is feersum. The final scores for the CnR are shown below:

If I remembered correctly, ÆḊ(A) = sqrt(det(AAT)) is n! times the n dimensional Lebesgue measure of a simplex formed by n input point and the origin in m dimensional space. When n=1 it degenerate to the Euclidean distance. Not that weird after all...

Still looks somewhat golfable but I figured I'd post it before FryAmTheEggman beats me to it. ;)

Here are some colour-coded execution paths: 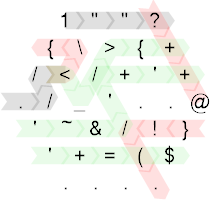 However, these are unnecessarily convoluted due to golfing. Here is the exact same code with a saner layout: 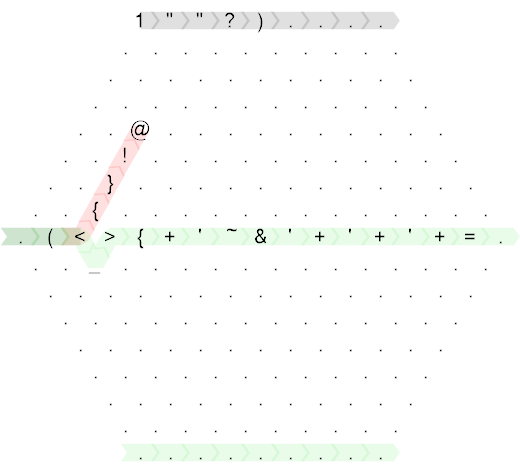 That's better. And finally, here is a memory diagram, where the red arrow indicates the initial position and orientation of the memory pointer (MP): 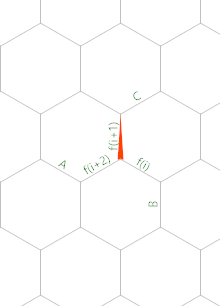 The gist is that I'm iteratively computing Fibonacci numbers on the three edges labelled f(i), f(i+1) and f(i+2) while keeping track of the iterator on the edges A, B and C. While doing so the roles of these edges are swapped out cyclically after each iteration. Let's see how this happens...

The code starts on the grey path which does some initial setup. Note that f(i) already has its correct initial value of 0.

Now the green path is the main loop. _ and > are just mirrors.

This way, the MP moves around the inner triplet of edges, computing successive Fibonacci numbers until n reaches zero. Then finally the red path is executed:

This seems to work, but it's always possible that I don't understand the language correctly.

with the -nm flags for +4 bytes. Try it online!

Okay, that loop was nuts. I tried several approaches, such as brute forcing over a reduced alphabet and brute forcing 3x+2 or 5x+4 and trying to extend it, but I never expected the solution to actually contain a loop.

The best way to see how this works is to add a D flag for debugging (so run with -nmD) and turn debug on for the above TIO link. A {} loop remembers the top of stack at the beginning of the loop, and exits when the top of stack is that value again. The interior of the loop does some fun subtracting and cycling of the top three elements of the stack, which is how the loop gets to run for so many iterations.

I tried to read the source code for this language but it was too confusing. For one thing, ip[1] is a line number while ip[0] is the column number, while the cp coordinates are used the other way around. Yet, sometimes the value of cp is assigned to ip. I gave up on trying to understand what the program is doing and found a way to encode the identical sequence of instructions using fewer bars.

Pretty much the same as the original just more golfed. :)

i: having +1 range compared to i. is useful (and weird). If you use i. here n=0 will be incorrect but luckily i: solves that.

Given n, it computes the nth-level factorial of n. This was a fun exercise!

The code is capable of running as Jelly so you can Try it online.

I spent a fruitless couple of hours learning to decipher "pointless" syntax... until I found this instead.

I spent several hours reading Jelly source code for the last one, so I might as well put this "skill" to use. I hope @Dennis will share with us his mathematical discoveries allowing a shorter formula (assuming there is something and not only weird Jelly tricks!).

This computes the product as a sum of squared Fibonacci numbers, which are calculated as a sum of binomial coefficients.

Thankfully, @miles himself posted the code to generate Fibonacci numbers in this comment.

I have no idea how this works, but I was able to spot a tiny improvement.

Computes this function instead:

Instead of doing -1^length(array) it converts the elements to Boolean values (which are always 1), negates them, and takes the product of the elements.

Brachylog is a Prolog-derived languages, whose greatest ability is to prove things.

Here, we prove these statements:

Sorry! I wasn't able to find your intended solution.

This relies on the fact that C(n+k-1, k) is the number of ways to choose k values from n with replacement.

Note: This is inefficient since it generates the possible sets in order to count them, so try to avoid using large values of n online.

I later found another 8 byte version that is efficient enough to compute n = 1000. This computes the values using the binomial coefficient and avoids generating the lists.

Not the answer you're looking for? Browse other questions tagged code-golf number sequence cops-and-robbers or ask your own question.