Build a digital clock in Wireworld

Inspired by this Game of Life question.

I challenge you to build a digital clock in the Wireworld cellular automaton. Your clock must count upwards from 00:00 to 23:59 in the usual fashion, or to 11:59 with an AM/PM indicator, then reset.

Your entry should be visibly divided into two parts. Part A should contain all of the non-display logic, all of the parts involved in incrementing and looping the digits. Part B will be the display and the logic that drives it. The only connection between these two parts should be 16 wires representing the four digits of the time in BCD (with one optional wire for the AM/PM indicator, and one optional wire for a signal clock line if your signals aren't continuous). (EDIT: always-zero wires can be omitted)

The timing of the clock behavior should be consistent. The simulation should take the same number of ticks for each of the 1440 transitions between states. Any electrons on the 16 wires should emitted from part A at the same time and start their trip in parallel.

This is a code-golf competition. Your score is the area of the axis aligned bounding box surrounding part A.

By analogy, if this were a textual language, your score would be the size of the clock-management function producing four 4-bit outputs, which contains a loop and the logic for 4 counters, not the function that decodes and prints that output.

Your part B can be as large or small as you'd like. It is only required so that the output of your submission can be seen by someone running it, since there is no easy way to simply "debug" outputs from a wireworld circuit. There are multiple BCD->7segment circuits available online. Feel free to use whichever one you'd like, or make your own if you need a clocked signal line, and display your AM/PM indicator at some scale similar to the digits.

EDIT: Part B is now optional. If you just have the BCD outputs from your part A, feel free to submit that. It will be more tedious to confirm the clock works, but I can read a row of bits just fine in a paused simulation.

Part I: The Minute Counter

The first one's easy - just flip-flip 01 forever. The third is a stream of four 1s, six 0s, phase shifted by six zeros. The fourth is a stream of eight 0s and two 1s.

The second is a bit harder as it's got a nasty asymmetry. However, I notice that (where . is concat operator): 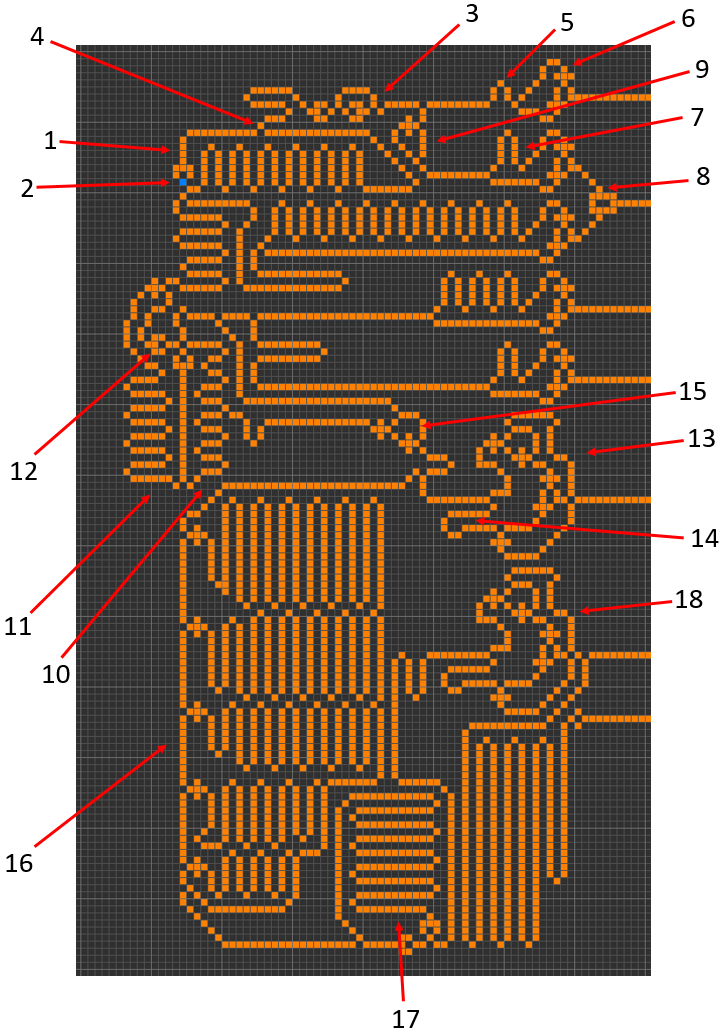 A "latch" is a 6-micron flip-flop connected to an AND-NOT and an AND gate to give a 6-micron on/off latch. A "catch" takes a continuous stream of electrons as input, allows the first through, then annihilates every other electron behind, until the stream ends at which point the catch resets.

Now chain two "latch & catch" in series, and you have only one in four electrons passing through.

Finally, take the one in four electrons, and the one in three, combine them with an AND gate, and only one in twelve electrons pass through. This whole section is the messy squiggle of paths to the top left of the hour counter below.

Next, take the electron every twelve hours and split back into one every hour, but output each onto a different conductor wire. This is achieved using the long coiled conductor with thirteen exit points.

Take these electrons - one an hour down different conductors, and hit a flip-flop SET line. The RESET line on that same flip flop is then hit by the next hour's conductor, giving sixty pulses down each wire per hour.

Finally - take these pulses and pass them into seven and a half bytes of ROM (Read-Only Memory) to output the correct BCD bitstreams. See here for a more detailed explanation of WireWorld ROM: http://www.quinapalus.com/wires6.html 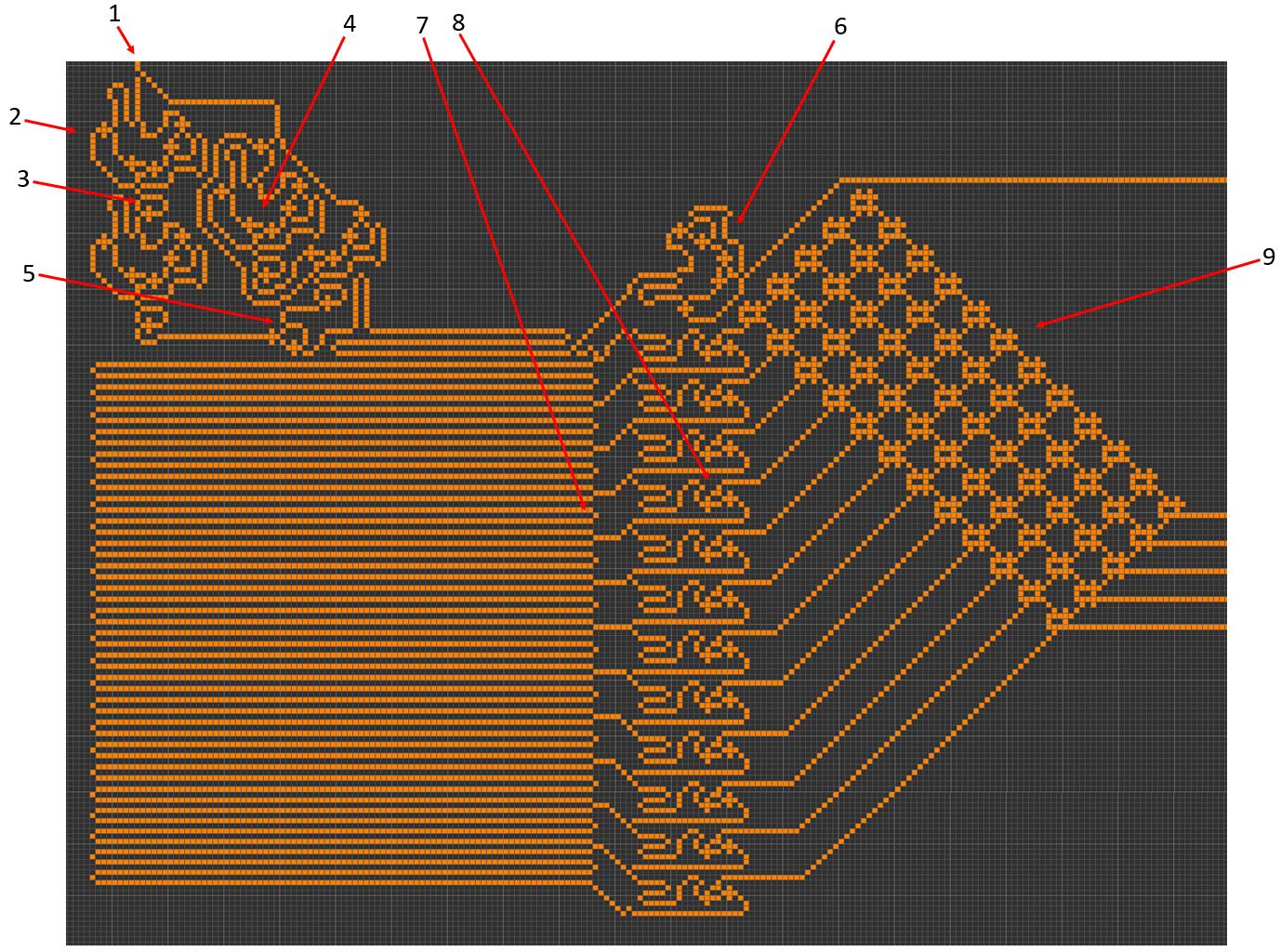 As promised 2⅔ years ago. Actual building time from scratch was less than 3 days.

I took inspiration from several sources, but in the end everything is custom made, and no cell is copied from any design by someone else. It makes royal use of the colors of WireWorldMarked (also by me, and supported by default by Golly). The colors are just eye-candy and don't change the rules of WireWorld.

This uses 10 micron technology (electrons spaced 10 gens apart). This makes small loops (memory cells for example) larger, however it allows not only for easier calculations but also compact axis-aligned ROMs and decoders, and it's the maximum throughput of a 'cross' gate. Everything makes use of 'negative' logic, where the presence of electrons is a logical '0' and missing electrons are '1'. In this sense, an OR gate, for example, does A=0 OR b=0 -> output 0. The sole reason for this is that it makes the binary counters, and in particular, the reset logic, much less complex.

The clock's real-time speed is 480 gens per minute (large green loop) which translates to 0.125s per gen or 8 gens/s. The loop expands the bounding box by 1 in the vertical direction, but with any smaller number the carries propagate too slow and it never displays the correct time. Unfortunately it will never be real-time in Golly because Golly only applies a delay between gens, and with a non-negligible duration of calculating a gen, it will run slow if you set the delay to 0.125. In fact, the speed appears to be non-constant and fluctuates by several percents.

[edit] This is v2 in which I've synchronized the display segments. This way the maximum delay between the final change of the leftmost display and the next change of the rightmost display (between 24:00->0:00) is 170 gens. The V1 display update took 500 gens, longer than 480 gens (a 'minute'), oops. I was about to boast how good I am for squeezing a loop of 440 in a box 1 less tall, then choosing 400 gens because it divides a minute nicely, but I wanted a significantly higher number, and was done waiting until someone pointed out "hey why don't you just use a smaller loop and some dividers?". So I used three dividers and a loop of 150 gens for a rate of 1200 gens/min (20Hz). The squeezed loop is still visible in the explanation image below. 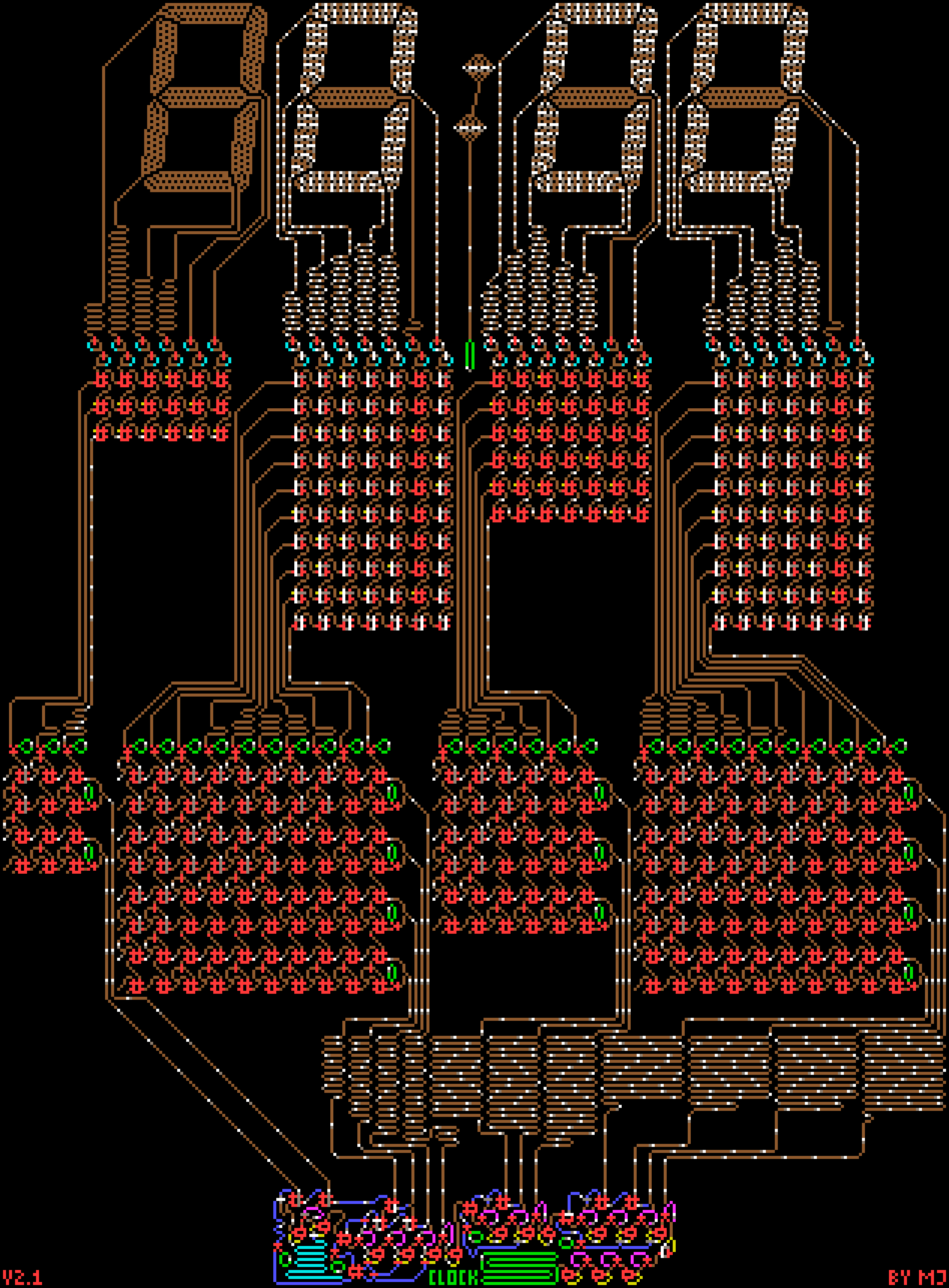 High-speed animation at 7200 gens/s (1.2MiB)
Real-time animation of only the display (600KiB)
(animations are of v1 but still give an impression of the clock)

Extra explanations and some dividers before final space-optimizations:

(the gray arrows point to cells in the middle of the machinery which are either present or absent, depending on if that bit should contribute to the reset logic.)

Golly pattern with everything I made until now: Clock (Mark Jeronimus).mc 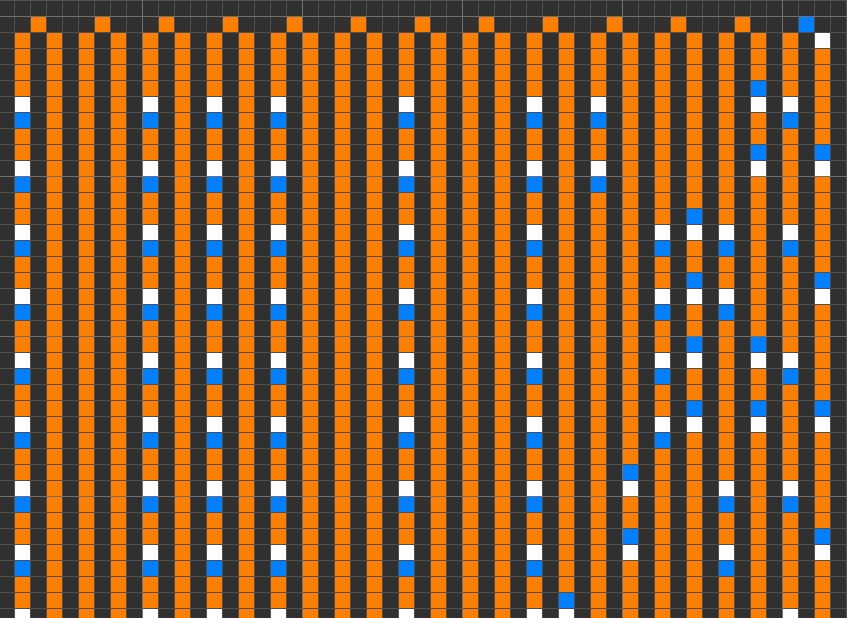 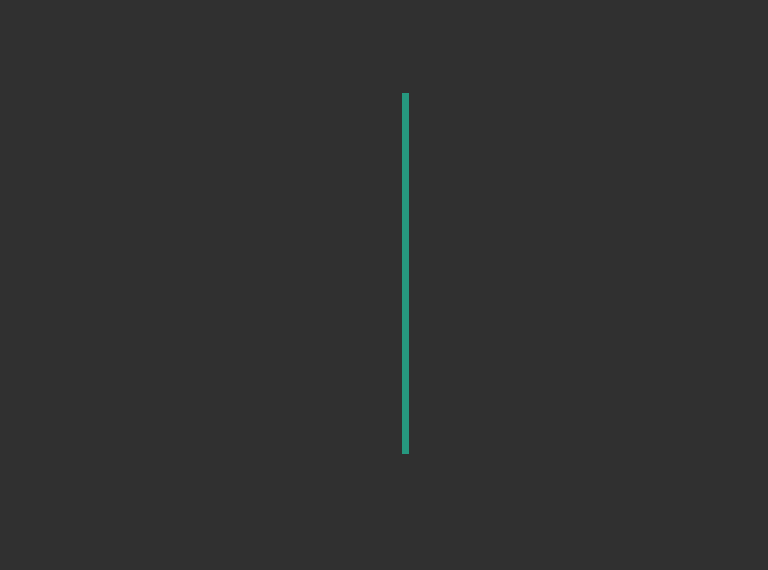 Output comes out the top of each loop.

I put all the states directly on the wire with this lua, letting golly step the electrons forward between bits so we don't have to follow the wire with a cursor.

I used this naive method to set a bar and crash course wireworld, golly and lua.

For testing I added these top wires and watched their tips. 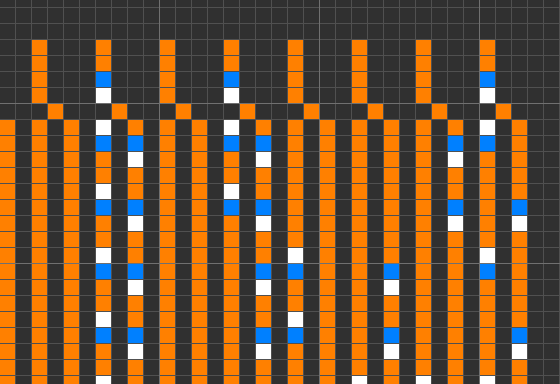 Here's the script to collect the 4 sets of 4 wire BCD to eyeball.

Final answer requires pruning the always-zero lines and routing the rest to their correct BCD inputs.

Not the answer you're looking for? Browse other questions tagged code-golf graphical-output cellular-automata or ask your own question.

537
Build a digital clock in Conway's Game of Life