This is a standard textbook example to demonstrate for loops.

This is one of the first programs I learnt when I started learning programming ~10 years ago.

You are to print this exact text:

The top five lines are for the loop construction. A0A0 deletes instructions whenever it runs them, so those lines ensure that the loop keeps running. On line 3 are ten P42 instructions which print * (42 is the ascii code for an asterisk). The P10 instruction prints a new line.

The bottom line acts as a counter. For every execution of the loop it jumps to there and then jumps back to the loop. This consumes an instruction on that line. There are exactly nine instructions, so when it tries to go there when it has already printed ten lines the program will halt execution (since an empty line swill stop execution in A0A0).

This is probably the best one as I don't see how this can be improved in 9 characters or less which could be gained by removing *s.

Not very impressive but I think simpler is shorter in this case. 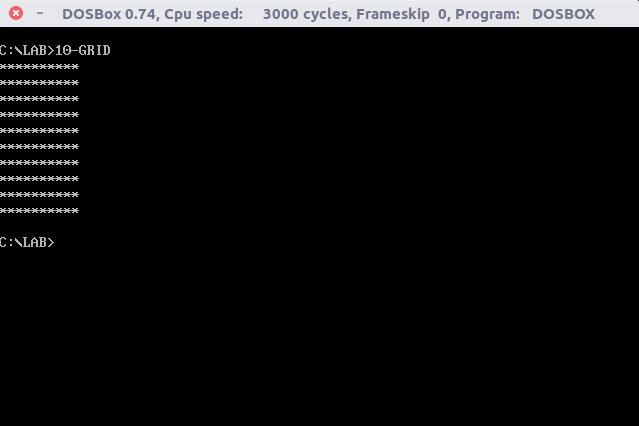 Simply defines the replacement a which maps to printing 10 asterisks. The main body consists of 10 as. Trying a secondary replacement b::=aa or b::=aaaaa both yield 33 bytes, which is unfortunately longer.

Whereas in some Thue interpreters, outputting implicitly outputs a newline, that is not the case in Twue, which must manually insert the newline.

Unpacks the map object so it actually prints the output, instead of optimising it away.