Guard your can with your life!

Lets Play Kick The Can!

Although Moogie is the current winner, if anyone can take his crown they are encouraged to do so

Kick the can is a children's game. Involving one defender, and multiple attackers. Today it is no longer such a game! Your job is to write a bot that plays it, to win, king-of-the-hill style!

The map is a maze as follows. 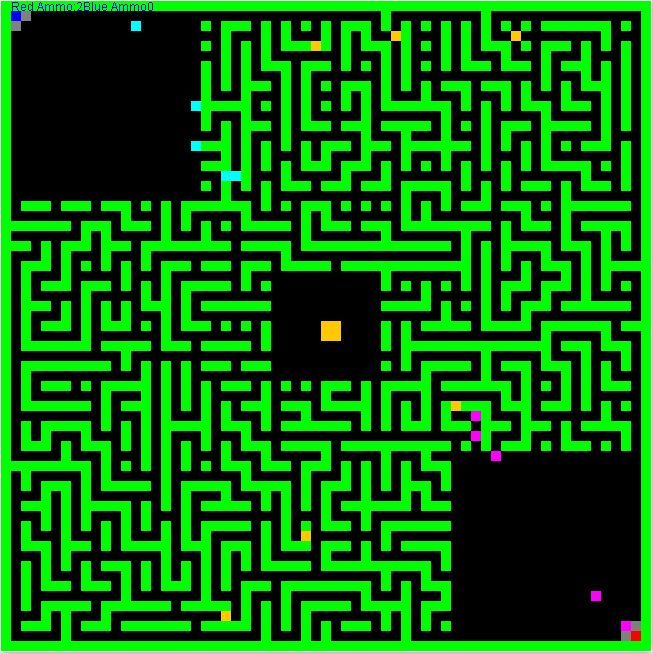 This maze is procedurally generated by first creating a maze using a depth first recursive backtracking algorithm. And then placing the shown holes in (as well as make the maze more "imperfect". The maze is 65x65 blocks wide, and zero indexed. Thus the blue flag (can) is at 1,1 and the red flag (can) is at 63,63. Blue team spawns at 2,2 and 3,3 4,4 etc. red team spawns at 62,62 and 61,61, 60,60 etc. The blocks in cyan are bots on the blue team, and the blocks in magenta are red bots. The game is always five versus five. Each bot on the team will use your code (but may store other instance variables (or create local files) to keep track of state and differentiate roles.

Mines can be placed as you can see in gray. And bombs can be thrown a maximum distance of up to four blocks. These travel for up to four blocks through walls and other players killing only the enemies which stand in your way. After each step they have a 40% chance of falling away. So they have 100% chance of 1 range 60% at 2 range 36% at 3 range and 21.6% at three range Placing a mine or throwing a bomb takes one team ammo. This starts at 0 and can be increased by collecting the orange boxes. Note that four (4) of these ammo caches will be conveniently centered. The Bots are lined up in an array of two red and two blue. I.E RRRRRBBBBB. Gaurding the flag is permitted, but beware that being near the flag(i.e less than five blocks) results in slowness, and only allows movent. every three turns. The Arena picks a random starter for each turn. I.E The order can be RBBBBBRRRRR BBBBBRRRRR BBBRRRRRBB etc..

Program your five bots (each has the same class file) to successfully navigate the maze and touch the opposing can while being careful not to accidentally knock over ones own can, or step on a mine.

The arena and bot entries are currently in Java however a stdin/out wrapper exists for other languages.

The arena code will be made available but here is the relevant details.

Note that using any techniques to modify or access data you should generally not have access to is not permitted and will result in disqualification.

The interface consists of two modes: initialisation and running.

During initialisation mode, a single INIT frame is sent via stdout. This frame's specification is as follows:

Where: {Team Membership Id} is an single character: R or B. B meaning blue team, R meaning red team.

The game will then proceed to send game frames over stdout to each bot as so:

The Controller expects that your bot will then output (to stdout) a single line response in the format:

{Action} is one of: Move Defuse Mine Throw

{Direction} is a single digit between 0 and 4 inclusive. (see direction information earlier)

NOTE: all strings will be delimited by \n End of Line character.

This will be an elimination tournament. My sample bots will participate as fillers, but I will not award myself the win. In the event of a victory by one of my bots, the title goes to the second place member, and will continue until there is a bot which is not one of mine. Each match consists of 11 rounds of kick the can. If neither team has won a single match by then they both are eliminated. If there is a tie of non-zero score one tie breaker match will be played. If a tie remains both are eliminated. Later rounds may consist of more matches. The seeding of the tournament will be based on the number of upvotes as of 7/31/16 (date subject to change).

Feel free to look at the code or critique it at this GitHub Repo.

Note that I do not have interpreters for too many languages on my computer, and I may need volunteers to run the simulation on their computer. Or I can download the language interpreter. Please ensure that your bots.

This bot nominates a leader from friendly bots each frame that will then assign nav points for each bot to navigate to.

Initally, all bots are on ammo depot finding duty, then two bots are assigned as guards with the remainder looking for ammo and then attacking the enemy flag.

I have found that the game is very dependant on the starting location of depots. As such i cannot really say that this bot is better than any others.

Thanks to @Moogie for helping me optimise my messy floodfill pathfinding. Here is the source for the bot. This guy knows how important it is to defend his flag. He alocates three defenders and two attackers. The defenders hang back and defend/gather ammo, the two attackers take (a fairly straight) path to the flag (and collect the ammo at the middle). He shoots anyone he sees, and should be fierce competition. The defenders place mines around the flag and camp until there is no opposition left so they can go and kick the can.

Not the answer you're looking for? Browse other questions tagged game king-of-the-hill path-finding or ask your own question.

68
BattleBots: The Tournament
34
What's wrong with public variables?
6
King of the Hill: Robot Battle
12
Capture The Flag
5
King of the Torus!
27
Team of The Hill!
48
Gold Collector KoTH
18
Game of Game of Life