Tom is going to implement a new programming language of his invention. But before actually starting working on it, he wants to know whether his language should be case sensitive or not.

On one hand, case insensitivity seems more easy to implement to him, but he worries that it could cause a lack in the possibilities of combinations of characters that form a variable, meaning that longer variable names should then be used to avoid naming clashes (for an example, you can use Hello, HEllo, heLLo and a bunch of other possibilities if the language is case sensitive, but only HELLO if not).

But Tom is a meticulous person, so just a worry isn't enough for him. He wants to know the numbers.

Write a function (or a full program if your language doesn't support them) that, given an integer n as the input, outputs (or returns) the difference in the number of permutations possible for a string of length n with case sensitivity and without.

In Tom's language, variable names can include all alphabet letters, underscores and, starting from the second character, digits.

Tom likes golf, so the shortest program in bytes wins.

It's okay if maybe the last two testcases aren't right because of numerical precision. After all, I am not even sure my code handled number 9 correctly.

Note: the values are correct up to the 53 bits of precision of javascript numbers.

Last test case (input 9) is not exact due to numerical precision.

An anonymous function that takes input via argument and returns the output.

Try it on Ideone

Works the same as my Pyke answer 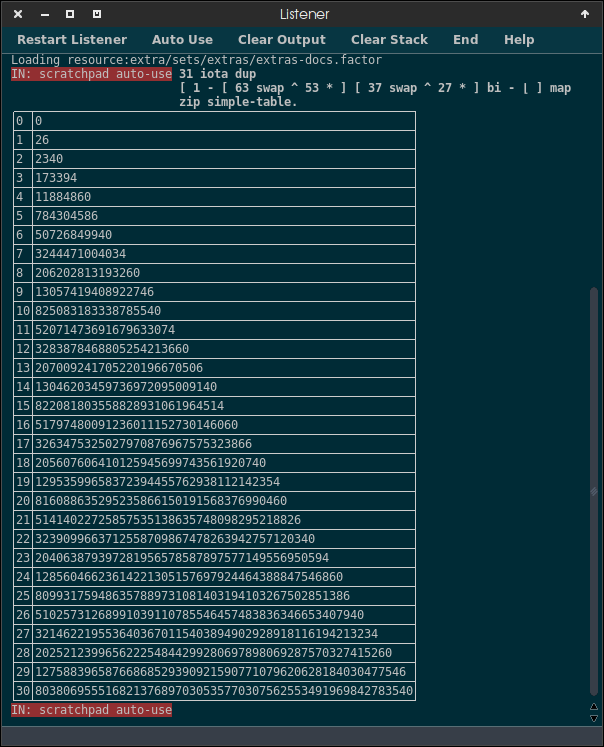 As normal for dc, input is taken from top of stack, and output is pushed to top of stack. For a full program, enclose between ? and p to make a pipeline filter.

Performance is reasonable for small n, but does start to tail off once it reaches a few hundred thousand or so:

That last example does produce a 1941435-digit result, so maybe it's not too bad for all that.

Not the answer you're looking for? Browse other questions tagged code-golf math combinatorics or ask your own question.