Write the shortest code that either:

You may use standard forms of input and output.

(I gave both options in case one is easier to do in your chosen language than the other.)

For the function that takes an n, a reasonably large return value (the largest Fibonacci number that fits your computer's normal word size, at a minimum) has to be supported.

Haven't seen a R solution, so:

Try it online! (or don't, as this uses features exclusive to v3)

Simply takes the first \$n\$ elements of the infinite list of Fibonacci numbers.

(My answer from a previous Stack Overflow question.)

-2 bytes thanks to Michael Chatiskatzi!

Start with [0,1].
while(1; ... ) infinite loop, 1 is a truthy value.
[last,add] the new pair is the last value of the old pair and the sum of the old pair.
while returns all intermediate pairs, [1] gets the second element of each pair.

A recursive filter written for this tip.

A really really truly ugly thing. It recursively calls main, and spits out warnings in any sane compiler. But since it compiles under both Clang and GCC, without any odd arguments, I call it a success.

It prints numbers from the Fibonacci sequence until the integers overflow, and then it continues spitting out ugly negative and positve numbers until it segfaults. Everything happens in well under a second.

Now it actually behaves quite well. It prints numbers from the Fibonacci sequence and stops when the integers overflow, but since it prints them as unsigned you never see the overflow:

Inspired by the beauty of Jon Skeet's C# answer and St0le's answer, another C# solution in only 38 characters:

Yay for recursive Func<>! Incorrect when you pass in negative numbers, however - corrected by the 40 character version, which doesn't accept them:

Note: as pointed out by @Andrew Gray, this solution doesn't work in Visual Studio, as the compiler rejects the in-line function definition referring to itself. The Mono compiler at http://www.compileonline.com/compile_csharp_online.php, however, runs it just fine. :) 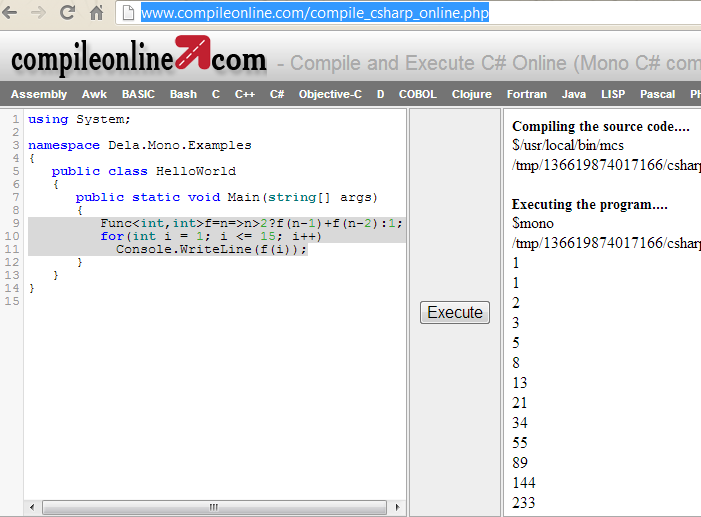 This solution has the distinction of running in O(log n) time.

This is going for the function option (takes N, outputs F(N))

This one is shorter than the word "fibonacci"

Just for fun, here's one that will always take exactly 19 ticks to terminate, whether given 0 or 1474. On my really old macbook, it on average terminates after 7ms.

This is non-competing: I just pushed the required version of the language about 10 minutes ago.

Detour works like befunge, fish etc. except for one crucial difference: where those languages redirect the instruction pointer, detour redirects data.

Input is pushed in at the beginning of the middle line (in this case the first). < decrements a number, > increments it. Q sends it down if a number is greater than 0, forward otherwise.

the line ;$< is the same as $<; because edges wrap. What it does is take the number it is given, then push that number and 1 less than that number to the input. This is how detour does recursion.

S reduces with addition, and . outputs the result.

For a better explanation, visit the site and it will give a visual representation of all the numbers.

Prints the Fibonacci sequence. Outgolfs the sample by 12 13 14 17 18 19 bytes. This is now just 1 byte longer than exactly as long as a simple counter! Try it online!

Here's a faster version. It prints out the Fibonacci sequence at a rate of 1 number per 5 ticks, compared to the maximally golfed version's 1 per 8 10 8 12 14 ticks. It's twice as fast as the sample and is still shorter by 3 4 bytes! Try it online!

-10 bytes thanks to ASCII-only!

As a callable function, input n in CX, output to a 10 byte little-endian packed BCD representation at [DI]. This will compute up to Fibonacci n=87 using the Intel x87 math-coprocessor using 80-bit extended-precision floating point arithmetic.

The values (initially 1 and 1) follow the conveyor belts indicated by the arrow heads. " duplicates the input into both outputs, + adds them, and } writes them to the output.

I am surprised at the lack of COBOL answers on this site. Well, it is ancient after all.

This outputs the fibonacci sequence correctly up to 38 digits.

We just need two variables, a and b to compute the whole fibonacci sequence. Here is pseudocode of what this would look like:

Translating the pseudocode above in COBOL is relatively short and simple. But we see that variables in COBOL are set to 0 by default, and having one of them set to a 1 is kind of (8 bytes) long, so we hack it out like so:

The 0 ** b ensures that a = 1 on the first iteration. From then on, the logic is the same as in our first pseudocode implementation (since 0 ** (any number greater than 0) = 0). The change from print(a) to print(b) is just to ensure that the numbers are outputted in the correct order.

Before you go saying that the online link doesn't match the submission here, that's because the extra , is needed to actually make the output appear online. If you use the offline version, then you will see that the above works just fine. Also, the 5 flag makes sure that the online interpreter times out after 5 seconds.

And now for the non-trivial version

Once again, discrepancies between online link and actual version are for the purposes of making it work online.

Fun fact: the infinite sequence function you see was inspired by the sequence blocks of the golfing language Arn by ZippyMagician.

Saved 4 bytes thanks to Jo King.

It prints the Fibonacci sequence separated by newlines.

New language! Yay! This is a fractional byte language I've been advertising on TNB for a while now. It's pure printable ASCII, and has a 97 char codepage. Although the spec is mostly written by now, this commit only has the bare minimum implemented for this challenge. To run this, download the source and then run in the root directory:

It will print Fibonacci numbers until your computer runs out of RAM. Explanation: 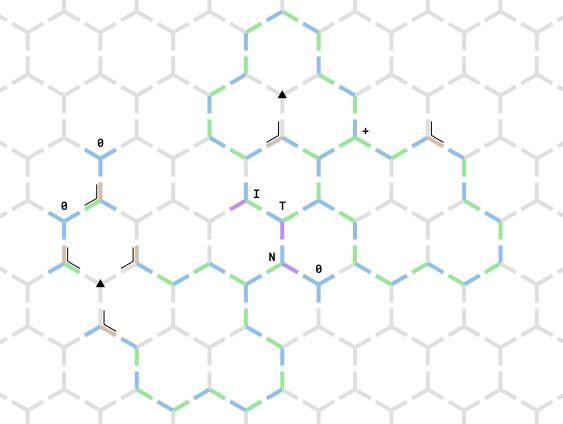 Trianguish is my newest language, a cellular automaton sort of thing which uses a triangular grid of "ops" (short for "operators"). It features self-modification, a default max int size of 216, and an interpreter which, in my opinion, is the coolest thing I've ever created (taking over forty hours and 2k SLOC so far).

This program consists of two precisely timed loops, each taking exactly 17 11 ticks. The first, in the top right is what actually does the fibonacci part; two S-builders are placed in exactly the right position such that two things occur in exactly the same number of ticks:

Precise timing is required, as if either of these occurred with an offset from the other, non-fibonacci numbers would appear in brief pulses, just long enough to desync everything. Another way this could have been done is with T-switches allowing only a single tick pulse from one of the S-builders, which would make precise timing unneeded, but this is more elegant and likely smaller.

The second loop, which is also 11 ticks, is pretty simple. It starts off with a 1-tick pulse of 1n, and otherwise is 0n, allowing an n-switch and t-switch to allow the contents of x to be outputted once per cycle. Two S-switches are required to make the clock use an odd number of ticks, but otherwise it's just a loop of the correct number of wires.

This program prints infinitely many fibonacci numbers, though if run with Mod 216 on, it will print them, as you might guess, modulo'd by 216 (so don't do that :p).

A spin-off of Joey's answer, this will take user input and output the nth Fibonacci number. This retains some weaknesses also inherent to Joey's original code:

Another derivative of Joey's answer, but with some improvements:

Generates and prints a Fibonacci series recursively until it runs out of stack space.

There are a couple other Java answers here, but I'm surprised nobody has posted this simple one:

For an extra byte you can extend the range up to long.

Compile online here (DOES NOT WORK IN CHROME). Enter input in the first input field.

Gets the nth Fibonacci number by finding the sums of the binomial coefficients C(n-i-1, i) for i from 0 to n-1.

Not the answer you're looking for? Browse other questions tagged code-golf number sequence fibonacci or ask your own question.

29
Fibtraction - Fibonacci but with subtraction
5
Implement the Fibonacci sequence... Shifted to the right
3
Add the Fibonnaci Sequence to the Lucas Sequence
-2
Calculate Fibonacci series from nth term to mth term
546
Showcase of Languages
89
Find the Factorial!
80
Sum of all integers from 1 to n
58
Evolution of OEIS
77
Tips for golfing in Ruby
71
Tips for code-golfing in C#
See more linked questions