Here is how we would calculate the first couple of terms by hand:

Write a program that when given n as input returns the length of the nth term of this sequence as output. Programs should have a runtime of O(n log n).

Answers will be scored in bytes with less bytes being better.

Here's a slightly shorter entry. Reads a number m from stdin, writes the length of the m-th term in the look-and-say sequence to stdout.

I'll post a more detailed explanation of the code later, but basically this also works by repeatedly multiplying a vector with a sparse matrix, encoded as an ASCII string. Some clever compression tricks, such as leaving out the all-ones superdiagonal of the matrix, are employed.

Ps. Here's a link to an online demo. The server has been pretty slow lately, though, so if you see an error message about a timeout, try again (or just download the interpreter and run it yourself).

Furthermore, in his 1986 article "The Weird and Wonderful Chemistry of Audioactive Decay" (which basically introduced the look-and-say sequence to the world), John Conway proved a remarkable (and, for this challenge, crucial) result which he called the "cosmological theorem":

Cosmological theorem (Conway): There is a set of 92 finite strings of numbers 1–3 (which Conway named after the chemical elements; see table here), and two infinite families of strings each consisting of a fixed prefix followed by some number higher than 3 (these can only appear if the initial string contained number higher than 3 or sequences of more than 3 identical numbers), such that, after at most 24 applications of the look-and-say transformation, any string splits into a chain of such elements, each of which thereafter evolves independently (and splits into further elements).

Thus, to determine the length of a string sufficiently far in the look-and-say sequence, it's sufficient to know how many times each element appears in it. And, since each element evolves independently, knowing these "elemental abundances" is also sufficient for calculating the corresponding abundances of the next string in the sequence, and so on.

As it happens, the look-and-say sequence starting from the string 1 splits into two Conway elements (Hf72 = 11132 and Sn50 = 13211) after just seven iterations. Thus, thereafter, we only need to keep track of the abundances of the 92 "common" elements (as the two families of "transuranic" elements cannot arise from common elements).

Mathematically, we can treat the elemental abundances as a vector of length 92. Calculating the abundances in the next step of the look-and-say sequence is then just equivalent to multiplying this vector with a 92 × 92 matrix, which is what r.e.s.'s solution does literally.

In fact, r.e.s.'s solution actually tracks the abundance of each element multiplied with its length (i.e. the "total mass" of that element in the string), adjusting the matrix accordingly, so that the total length of the string is given simply by adding the numbers in the abundance vector together. However, I did not find that a particularly convenient representation for code golf. (It was convenient for Nathaniel Johnston's derivation of Conway's polynomial, since it encodes the lengths into the matrix and thus gives the right eigenvalue for the asymptotic growth rate, but we don't care about that here.)

Instead, I just track the raw abundances of the elements, and only multiply them with the lengths at the end. This has, combined with the convenient fact that none of the decay products of any element contain more than one copy of any element, means that the entries of the transition matrix are just zeros and ones. Also, by far most of them are, in fact, zeros (in math jargon, the matrix is sparse), so I can save a lot of space by only storing the indices of those entries which are ones.

Also, in his article, Conway ordered the elements such that (except for H1 = 22, which is a fixed point of the look-and-say transformation), each element decays to the next lower element in the sequence (and possibly some others). In fact, most elements decay only to the next lower elements. Thus, by using Conway's ordering of the elements, I can hardcode this "standard decay" as part of the iteration, so that I only need to store the matrix entries corresponding to the other, "nonstandard" decays, saving even more space.

(In fact, what I actually do, for reasons mostly to do with how GolfScript's array operations work, is store one array listing the matrix rows containing non-zero entries (i.e. the elements which are produced in nonstandard decays) and another array of arrays listing, for each of these rows, the columns where the non-zero entries occur (i.e. the elements which produce these elements in such decays). See the code and comments above for how these arrays are actually used to calculate the updated element abundances.)

The final space-saving trick I used was to encode all these arrays as strings of ASCII characters. Conveniently, there are 95 printable ASCII characters from space (32) to ~ (126), and the largest value that appears in any of the arrays is 92, so they fit very well. One extra tweak I made was to shift the values in the element length array (which only go up to 42 anyway) up by 8 so that I could avoid the character ' (39) and thus store my data in a single quoted string without having to add any backslash escape characters.

There are some other minor optimizations too, but those are just standard GolfScript coding tricks. I should note that the actual code is not all that carefully optimized — it's quite possible that it could be golfed down further.

In any case, despite the inherent slowness of a double-interpreted language like GolfScript, the code runs quite fast and scales well: computing the length of the 10,000th string in the look-and-say sequence takes about 1.5 minutes on my computer.

Conveniently, GolfScript stores all numbers as arbitrary-length integers (bignums), so I didn't have to do anything special to make it produce exact results even for large inputs. The expected time complexity of this program is O(n log n) (as the element abundances grow linearly with n, and bignum addition takes O(log n) time), and the actual runtime seems to fit that prediction pretty well, as the graph below shows: 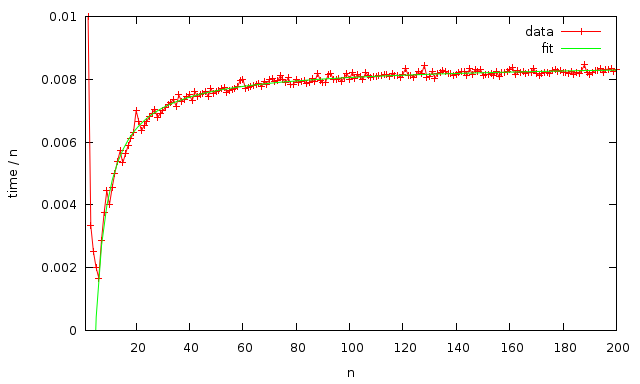 This is a version that uses Nathaniel Johhnston's matrix formulation. (The matrix could probably be golfed further using eval.)

Not the answer you're looking for? Browse other questions tagged code-golf math sequence restricted-complexity or ask your own question.

16
Look-and-say: Conway revisited
22
Look-and-say sequence: roman numerals edition
15
The Lehmer-Comtet sequence
15
Generate unseen numbers
14
The cyclic sequence of even digits, with odds in between
16
The sequence of range-exponentiated integers
62
Compute the Kolakoski sequence