We -- especially the geeks among us, who tend to be fans -- all remember this old Far Side cartoon: 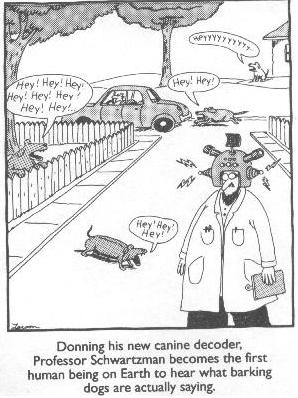 Clearly, Professor Schwartzman could have brushed up on his programming skills just a wee bit more before he put his invention to use. But can you replicate it yourself... using as few bytes as possible?

You must create a script that translates dog sounds into appropriately intonated "Hey"s. This is pure code golf; the lowest number of bytes wins.

Your input will consist of some combination of the following tokens:

Note, again, that the Woof-based and Grr-based tokens always require at least two os and rs respectively; Wof and Gr are not valid tokens.

There is no limit on how long a token can be (e.g., how many repeated as there can be in a Bark token); however, your decoder only needs to work correctly for input tokens with up to 10 total as, os, or rs to pass this challenge.

Faithful to Schwartzman's design, your canine decoder program must process it into output text as follows:

Remember to drop one y from the output for Woofs and Grrs only! The input Baaaaaaaark?, with 8 as, will become Heyyyyyyyy?, with a matching set of 8 ys. However, Woooooooof? becomes only Heyyyyyyy?, with 7 ys.

All Bark-, Woof-, and Grr-based tokens in your input are assumed to begin with capital letters. Therefore, there is no need to handle turning Bark grrr into Hey heyy or anything similar.

1 byte saved based on an idea in MT0's answer.

This simply turns all letters into y, but if they are followed by an f or k we immediately replace that as well. By removing f and k we "normalise" the lengths of the words so that they now all have two more ys than they need.

This turns the first two y of every word into He, completing the transformation.

Simple regexp substitution using the auto-printing -p adding 1 byte to the count. /ge executes the substitution for every pattern, and runs the replacement as code.

An older version used a three-way detection, but Martin Ender noticed that I was not aggressive enough, which saved me 10 bytes.

msh210 informed me that you don't need quotes around the string He, saving two bytes.

Thanks to @MartinEnder for bytes 56 & 51 and the inspiration for some of the other shavings.

A Perl copy of Martin Ender's Retina answer. 24 bytes, plus 1 for -pe instead of -e.

Edit: Golfed 1 byte whitespace and 4 bytes on getting the values from findall result.

Edit2: Golfed 1 byte (Bark's "a" was not counted properly)

6
Tic Tac Toe encoder/decoder
7
Remove a weight so the rest can't be balanced
4
Output optimal trill fingerings
15
Reverse an N-Dimensional array
23
"Add one" to every color in an image
19
Make an interweaving quine
19
Give me your tired, your poor, Your huddled masses yearning to breathe free
29
Print "Hey Jude" from The Beatles
16
Prime Factor Encoding
52
Let's golf a BIBABOBU decoder