Smallest integers after N divisible by 2, 3, and 4

Give credit to whom credit is due.

Objective Given an integer N > 0, out the smallest integers A, B, and C so that:

This is a code-golf, so the shortest answer in bytes wins. You may use a language made/updated after this challenge, but it is strictly non-competing. 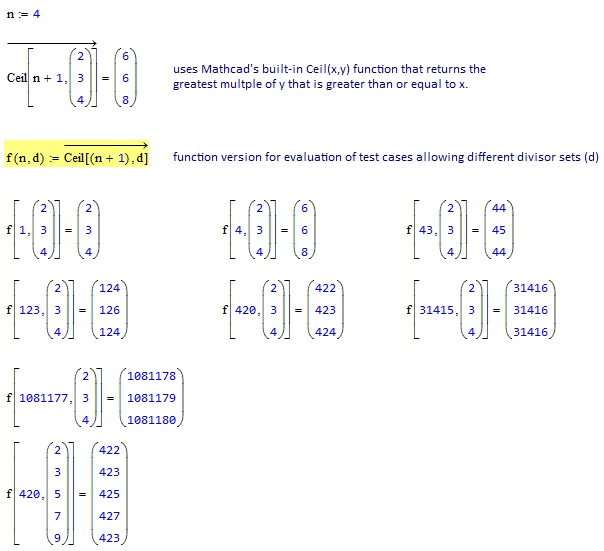 Demonstration
Fixed the outputs while shaving off a few bytes.

Takes input through the output variable and gives output through the input variable. (Shortest I could get it without reversed I/O was ~{>ᵛ}Ṫ;234z%ᵛ0∧Ṫ, which at 16 bytes ties an extremely awkward implementation of Dennis' algorithm: +₁Xṅg;234z%ᵐ+ᵐ↙X.)

Uses modulo of 2, 3, and 4 to get the distance to the next divisible number and then adds it to the original number (+1)

You could save a byte if you are allowed to take input by initializing the stack with N, but TIO doesn't allow for that. The interpreter on https://fishlanguage.com/ does.

Happens to be valid Thumb-1, but feel free to use Thumb-2 to compete.

It is easier to understand in the equivalent C code.

You may notice that no class has been defined, but instead an interface. This is just to further golf the code. Since the interface hasn't been given a public access modifier, the main method doesn't need it, either.

For a better understanding of this code, it's shown below with the variable a remnamed to its traditional name args:

The program inputs a value as a command-line argument which is immediately incremented for compactness before being stored in the double variable n. Next, the for loop cycles through each integer i from 2 through to 4, printing the output values each cycle. See here for an interactive demonstration of the formula used to calculate said values.

In order to further golf this code, I think finding a way to use Java 6 would be ideal due to the static block's functionality, as expressed below:

As you can see, although it's definitely good practice, explicitly defining the main method isn't necessary in this particular version of Java. (Correct me if that was incorrectly phrased)

Unfortunately, in performing such a conversion, the var keyword would no longer exist (since it was introduced in Java 10). More importantly, reconstructing the value input mechanism would be necessary, since a static block obviously doesn't have any method parameters, and especially not for command-line arguments. Feel free to leave comments and suggestions.

Uses bit tricks to avoid dividing by 2 or 4 (sadly, it's unavoidable for 3)

Not the answer you're looking for? Browse other questions tagged code-golf math number or ask your own question.

30
Return the integers with square digit-sums
17
Smallest Hamming distance to a palindrome containing a substring
36
Let's decrease the monotony
22
Rank a list of integers
9
Order of Mia Sets
45
f(g(x)) decreases while g(f(x)) increases
22
Let's converge to 9!
17
Least integer as a product of given factors
24
Sequentially Divisible
19
What's next, Achilles?