It may sound strange, but we haven't got ONE challenge for counting from 1 to n, inclusive.

Write a program or function that prints every integer from 1 to n inclusive.

EDIT: I made the 2^64-1 rule a bonus, since there has not been much interest in this challenge. If your answer supports 2^64-1, you can now edit it to include the bonus. Also, you can post an answer not supporting it, if it is shorter.

This statistician's language also has a scan() function, but requires information about how many characters it will receive, and providing a value for that would either limit the highest possible x, or require a very, very long argument.

A built-in function that, when given a single positive integer n as argument, yields 1 to n.

I made this language after the challenge was posted; thus, this answer is non-competing. It's a postfix-notation stack-based language based purely on the stack, a single variable, and many operators, and its interpreter is currently written in Java.

Wow can't believe I don't see any ><> submissions, have 3! All the solutions are 16 bytes, just structured differently (the top one would be my "real" submission I guess). Simply place n on the stack and away you go!

As I made these in reverse order, I'll explain them in reverse order (probably be easier to follow)... These programs are pretty simple, I invite you to check out what the instructions do here.

This simply places 0 onto the stack (let's call it x), then tells the fish to move downwards, then to the right. We now have [n, x] on the stack, we'll place _s before temporary versions of these variables.

If the fish continues forwards it will encounter rnao because of the wrap-around, this simply tells the fish to reverse the stack, putting _x at the front of the stack, then outputting it as a number with the instruction n. ao simply places a newline on the stack (character 10 or a), and then outputs it.

This is pretty much the same as Explanation 3. It doesn't have the fish mirror/movement instructions because it's only one line. It can do this because the ! at the end of the line causes the fish to skip the 0 at the beginning during the wrap-around.

This solution is slightly different. I was hoping to save some bytes (you can see I didn't).

You can see it deviates pretty early with :{:, instead of copying x twice in the beginning I only do it once, then I only do one stack shift left instead of two.

I also don't use (?; and instead use ?!;, this is because n is actually being decremented each loop instead of just being compared to x. The ! is because ? actually does the opposite of what we want compared to before, so we invert its behaviour by executing ! when n>0, skipping the ;. Then the fish swims over 1- which simply subtracts 1 from n, and the program carrys on the same as the others!

Lambda. Splats a range and prints that. Try it online!

EDIT: I can't personally confirm that this counts up to 2^64-1, since it runs out of memory, but I believe Ruby uses bigints. If someone can confirm this, the score with bonus is 9.6.

I gets input and converts it to an integer before pushing it onto the stack.

\ takes the two top stack items and runs it through the Python range() function.

Uses Java 8 functions to use unsigned longs which can store numbers up to 2^64-1(according to this page). Number is taken from first number

Uses this version of processing. In practice it cannot do it all the way until the max number but it could in theory. Also a side note it did say input as any way I wanted and that input is replaced by n.

This was an edit of my initial entry, however there is a slight issue with it, which is explained below: 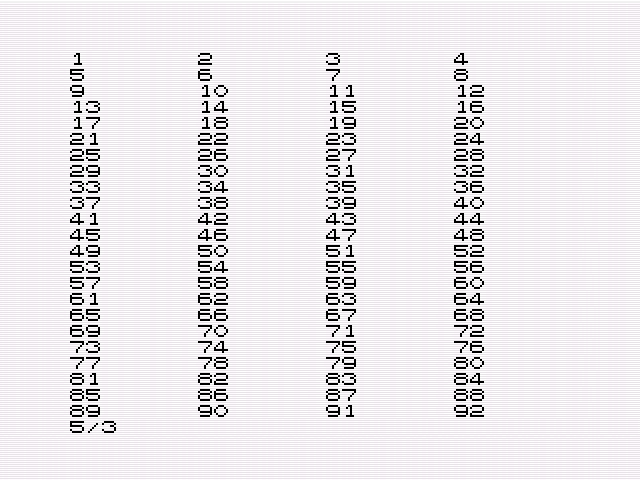 Whilst there is nothing wrong with the logic, when the ZX80's DFILE (or screen) is full, the program will halt and you will be returned to direct mode, which will show your program listing.

In order to get around this, press T on the ZX80's 'keyboard' and, on the 4K ROM version at least, the command CONTINUE should appear. Press NEW LINE and the program will continue where you left off. You can only do this once you have returned to direct mode though.

As you may know, a ZX80 with an 'old ROM' (original 4K ROM) will only handle 16-bit signed integers so the range is limited and I'm not going to win the bonus points. If you enter a number <1 then it will print 1 then exit.

This will work in other variants of Sinclair and 8-bit BASIC. On the ZX Spectrum though, this can be done in just two lines, like:

Using a FOR..NEXT loop will condense the program further to just one line.

Fortunately, the Spectrum, like all other more sane 8-bit personal computers, allows <= and >= in your conditions. If the 4K ROM ZX80 allows this, I've not found out how to do it yet.

\nis a newline. Try it online Input is in the variable numbers, that is STDIN for newline.

Outputs an array of integers.

Outputs an array of integers

An anonymous function that does the task described. It can be one byte shorter if an inclusive range was used, but that's currently unstable. It is able to count to 2^64-1 (provided you call it with an u64 as argument).

This code assumes n is already on the stack as it saves bytes over taking it from STDIN. The TIO link has a header provided to take n from STDIN so it can be tested more easily. An extra no-op command (stnn ; slide 0) has been added to the header to work around a TIO quirk where a newline gets introduced when the sections are concatenated.

Whitespace numbers are arbitrary precision so this program exceeds the upper limit specified in the question. This uses a fixed number of stack elements so will not run into memory limits either.

MY is written in Python, where integers have no size limit.

Fairly simple, does exactly what the challenge wants. Since cQuents is implemented in Python, it works as long as Python integers can continue growing.

Technically it can go as high as you want as long as you set your cell size high enough.

Also all I/O is in ascii.

How it works is first it takes input into the third cell, then it duplicates itself (self-destructively) into the next two cells, and taking one away from the second one, repeating that unit it reaches 0. Then, it prints 1 and then goes back two spaces and prints until it reaches the beginning, where we skipped two spaces so it would terminate.

Input is implicit. When the first : is reached, there's nothing on the stack to duplicate so it reads an integer. This code is therefore equivalent to $(:-1);(%;). Explanation:

Try it online! (Nonworking with (:-1);(%;) until TIO's SimpleStack interpreter is updated)

Not the answer you're looking for? Browse other questions tagged code-golf sequence or ask your own question.

Code Golf Stack Exchange is a site for recreational programming competitions, not general programming questions. Challenges must have an objective scoring criterion, and it is highly recommended to first post proposed challenges in the Sandbox.
The Overflow Blog
Featured on Meta
Visit chat