Find the program that prints this integer sequence (Robbers' thread)

This is the robbers' thread. The cops' thread goes here.

In the cops thread, the task was to write a program/function that takes a positive (or non-negative) integer and outputs/returns another number (not necessarily integer). The robbers task is to unscramble the code the cops used to produce this output.

The cracked code doesn't have to be identical, as long as it has the same length and any revealed characters are in the correct positions. The language must also be the same (version numbers can be different). The output must of course be identical.

No-ops can be used in robber's solution.

Simply doubles the input (and assumes positive input). The code is (for once) simply executed in reading order. The code uses three memory edges A, B, C with the memory pointer starting out as shown: 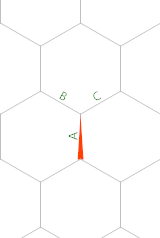 Try it with J.js.

Try it online! This uses an alternative definition given on the page. Explanation:

I think I got it. Yeah. This one was really hard. I like the submission because it relies heavily on precedences.

If you split this code according to the JavaScript operator precedences you get:

I will award a 100 rep bounty on this cool Cop submission.

Notes: I was misled by the } for soooooo long. So it also matches [.

Returns 1 if its argument is a multiple of 3, and 0 otherwise. Not much beyond that.

Code (with a whitespace at the end):

Found the following three matches with a script I wrote:

I tried to do the first one, which is basically done with YP*k:

Consists of a simple cat (ax) followed by a no-op. Not sure what the cop was going for here.

If you miss non-revealed characters, they are replaced with spaces.

Could be different from the intended solution as I found this by hand.

The sequence basically is a binary Sierpinski triangle:

Luckily, I remembered this one :)

I completely ignored the prespecified commands, except the ) because I did not have enough space.

The actually useful commands are here:

Stretched to a straight line:

The mathematical equivalent is sum(sum(n)), where sum is summation.

Simple enough: alert the σ0 (number of divisors of) x, then put useless stuff at the end.

(You could've golfed it down to two bytes! Just σ0 would've done nicely.)

Not that hard, actually. Just searched for sequences that met the constraints until I found one that could be generated in the given space.

I'm sure the actual code generates a trickier sequence than this, but with just the two outputs, this OEIS sequence is simple and matches them.

Without all the ignored characters, the algorithm is just x=>x?Math.pow(10,x-1):0.

I don't think this is intended. And I don't know why J had this behavior. But it works.

Code (with obfuscated version below):

Not the answer you're looking for? Browse other questions tagged number sequence cops-and-robbers or ask your own question.