Your challenge is to passwordify the string! What is passwordifying, you ask?

You must replace all spaces with underscores and move all numbers to the end of the string in the order that they appear from left to right. Then, for every letter in the string, randomly change it to uppercase or lowercase.

Examples (case of characters should vary every time):

Whoever asks on Information Security SE if this is a good hashing algorithm wins!--Don't worry SE overlords, I'm just kidding.

Another collab with @MartinBüttner and on the more insane side of the Labyrinth spectrum – for the first time we have all four of ^>v< in the one program. Try it online!

The general algorithm, which runs in a loop, is as follows:

To keep the explanation compact, here's roughly how each part of the program corresponds to the pseudocode above: 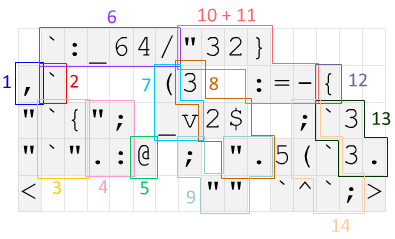 Here are the interesting parts.

Getting randomness in Labyrinth

There's only one way to get randomness in Labyrinth, and it's when the IP tries to go forwards but 1) there's neither a path forwards nor backwards and 2) there's paths available left and right. In this case, the IP randomly chooses between the left and right routes.

This is only possible using the^>v< operators, which pop n and shift the row/column n away by 1. For example, the program (Try it online!)

outputs either 1 or 2 randomly, since the v shifts the column with offset 0 (i.e. the column the IP is on) by 1, yielding

The IP is facing rightward and tries to go forwards (top of stack is zero) but can't. It also can't move backwards, so it randomly chooses between left or right.

An improvement on the other two Python answers because:

Translation of my MATL answer.

47 bytes just to randomise the case of a character...

Thanks to xnor for shaving off 6 bytes.

Ahhh, string processing Mathematica... isn't it lovely. This is an unnamed function that takes and returns a string.

Due to all the syntactic sugar, the reading order is a bit funny:

Split the string into characters, otherwise we can't really do anything at all with it.

Sorts the digits to the end. By wrapping the test function in a list, we make the sorting stable.

Maps the left-hand function over each character in the list.

Chooses a random case-changing function for the current character.

Applies it to the current character.

Finally joins all the characters back together into a string.

PowerShell stands for horrible golfing language. Split into char array and replace spaces with underscores. Take each character and process. Collect numbers into variable $d for later output. Each other character is randomly make into uppercase or lowercase by invoking an expression using 'char'.ToLower() or 'char'.ToUpper(). If any digits were collected append them on the end.

Run with the input on STDIN:

This is an anonymous function that accepts a string and returns a string. To call it, assign it to a variable.

First we break the input string into an array of its characters, and sort the array according to whether each character is a digit. This maintains order in the text and digits but pushes digits to the end. Then, for each character in the array, we check whether it's a space. If so, replace with an underscore, otherwise randomly choose one of ucfirst or lcfirst to apply to the character, thereby converting it to upper- or lowercase, respectively. Join the array into a string and we're done!

Anonymous function. Removing the space before c.downcase causes a syntax error for some reason and I'm not sure why.

I'm not too good at golfing in factor, and I'm not sure if I took the best approach here, but thought I'd give it a go

When object meets functional, you can do some pretty things, even in lua! I don't think I can golf this down, it's already quite a huge mess, and I'm already happy to beat most of the python answers :D.

Yes, I added builtins for this challenge, but those are not especially targeted at this problem.

This works with version 0.1 of the interpreter.

There's probably a lot of room for improvement here that I'll work out later.

The srand() is needed to give us different random numbers each time it runs.
For this to work properly with multi-line input, we'd need to put something like A=N="" before the for loop.

As you can see, I am basically using the random module's choice function to choose a random function (either .upper() or .lower()) for each letter in the sorted version of the string given, in which all the digits go to the end. Also, every space is replaced with an underscore in the sorted string.

This is better than the other PHP golf, because:

Nothing crazy here, it :

You can try it here !

6
Finding Pairs for Letters
26
Remove all occurrences of the first letter of a string from the entire string
42
Reverse the consonants
21
Fizz-Buzzify a String
27
Remove Spaces, Maintaining Capitalization
48
prOGraMMIng PuZZleS & cOde ____
18
Write a function/method that takes in a string and spells that word out using the NATO Phonetic Alphabet. Titlecase optional
27
Vowels up, consonants down
25
Randomly capitalize half of a string