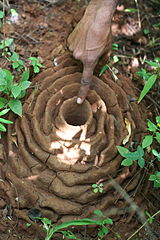 is an anthill in Langton's backyard.
The anthill is big enough to hold Markov's golfball, MarGolf. However, the anthill moves and changes direction depending on the surrounding terrain.

Game rules:
The configuration of the input field is called tick 0. Your program needs to evaluate and print out the configuration of the next tick, in which both MarGolf and Langton's Anthill will move to another cell. The the item in the current cell will become the item currently in the target cell. If both MarGolf and the anthill move to the same cell in the next tick, the game ends.

Update: forgot to mention anthill reverses direction before moving if it would otherwise go off the field. Credit to user81655 for reminding.

Assumes the final swap of * and O will empty the cell where * is coming from.

Not the answer you're looking for? Browse other questions tagged code-golf random or ask your own question.