We've had a couple of challenges about the Ulam spiral. But that's not enough.

In this challenge we will plot a triangular Ulam spiral (as opposed to the usual, square Ulam spiral). Here's a sketch of what the spiral looks like. 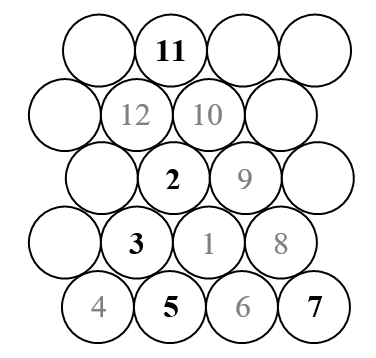 As we know, the Ulam spiral arranges all natural numbers in an outward spiral, and marks only those that are prime. So in the above sketch only the numbers that appear in black (the primes) would be shown.

Accept a number N as input and display the triangular Ulam spiral up to that number.

Choose any of the following. 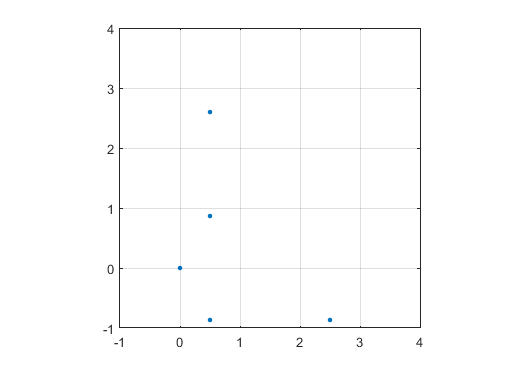 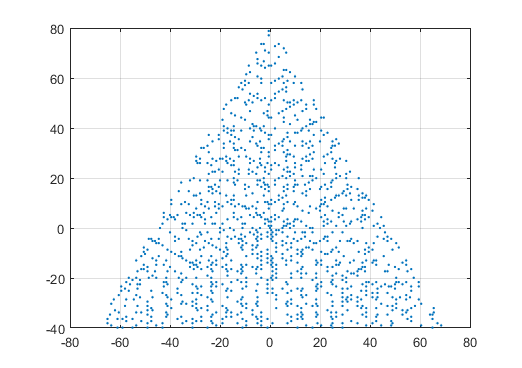 The actual reward is seeing for yourself those amazing patterns Code golf, shortest code wins.

Input as a single integer in STDIN. Output as an ASCII grid with 0 for primes. The rotation of the spiral is not consistent: the largest number of the spiral will always be on the bottom row.

The basic idea is to represent the triangle as a ragged 2D array while doing the computation. You get this array by reversing the lines and aligning all rows to the left:

Would be represented as

Since we've mirrored the line, we want to roll up the spiral in a clockwise manner. That's convenient, because all we need to do is rotate the triangle counter-clockwise and prepend the next sublist in order. We can rotate the ragged array by reversing all lines and transposing it:

So here is the code. One detail I'd like to draw attention to is the last bit that creates the triangular layout. I think that's rather nifty. :)

Edit (April 4, 2016): the function Y[ has been renamed to k since release 13.0.0. The link to the online compiler incorporates this change, so that the code can be tested. 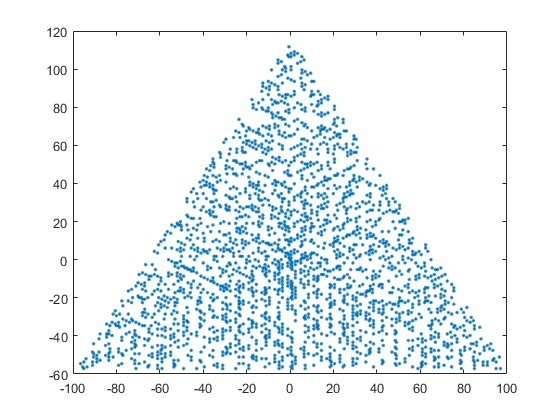 The code uses complex numbers to trace the path followed by the spiral. As can be seen from the first figure in the challenge, each straight leg of the spiral is a segment with increasing length 1, 2, 3, 4 ... and cyclically increasing orientation 120 degrees, 240 degrees, 0 degress, 120 degress...

The code first generates the individual complex displacements from each integer number to the next. These complex displacements have magnitude 1 and angle 2*pi/3, 4*pi/3 or 0 (in radians). Thus they can be easily generated as imaginary exponentials. For that, the integer sequence 0,1,2,2,3,3,3,4,4,4,4... is used first.

Finally, the positions corresponding to non-prime numbers are discarded, and the rest are plotted in the complex plane.

Drawing should be done with

527 bytes is the full document as above, i.e. including preamble and parameter (here 4000, so ~523 without parameter). Produces a PDF file.

Basic idea: well, just draw. Uses a matrix transformation for a triangular grid. Only problem is that also the dots are affected (and stretched) out by the transformation. So I choose for ellipse markers :) what I mean by that is clear in the second image (n=250, 5pt).

Another caveat: can only handle up to a bit less than 5000 because of TeX's maximum stack size. The first image is for n=4000. Apparently it is possible to increase the stack size, I didn't try it. 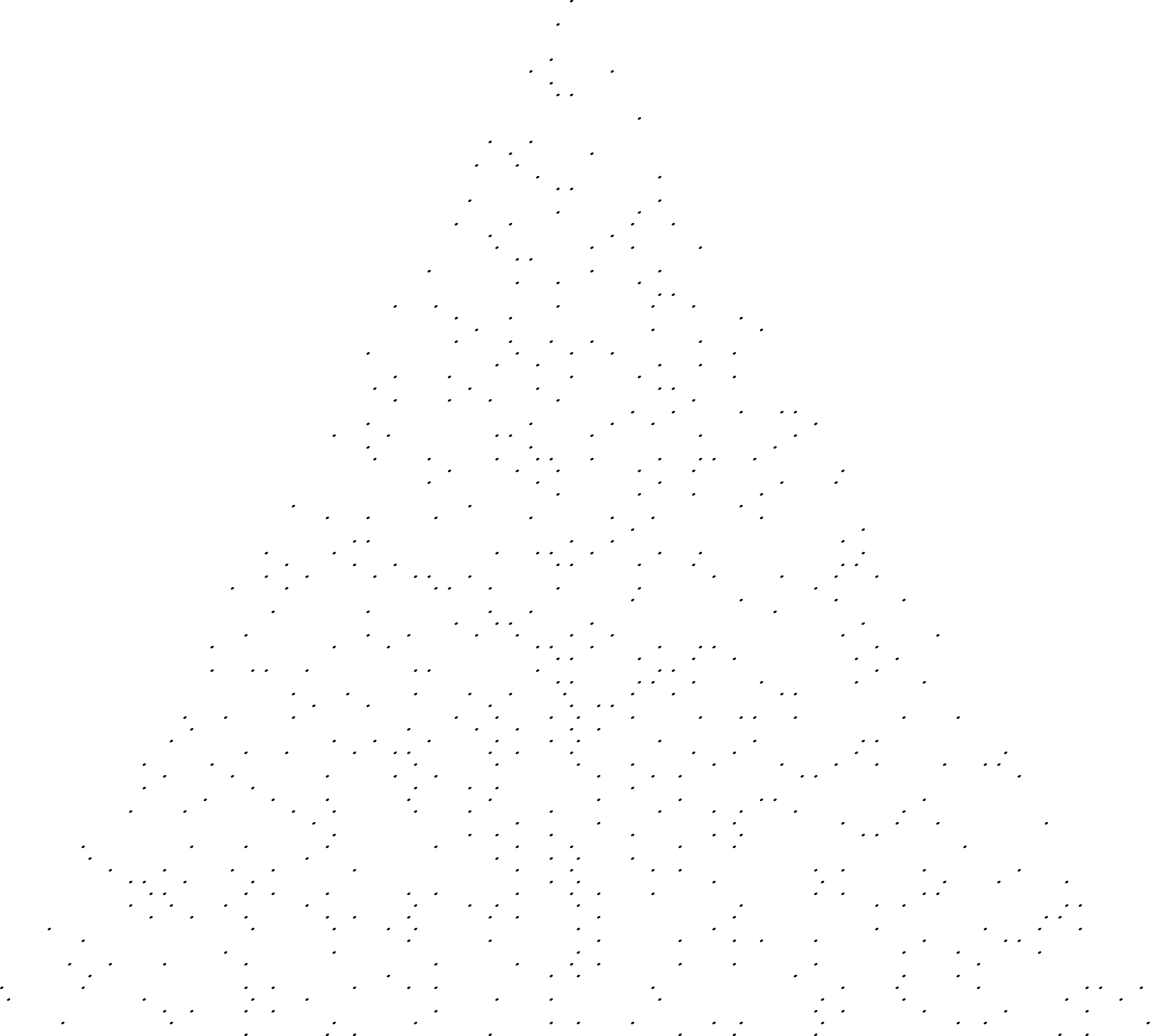 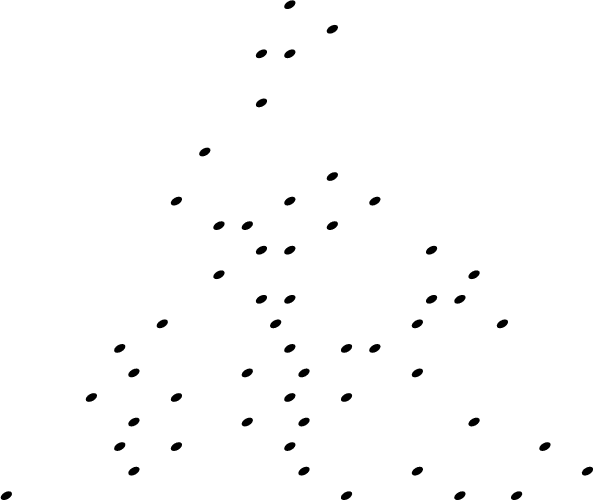 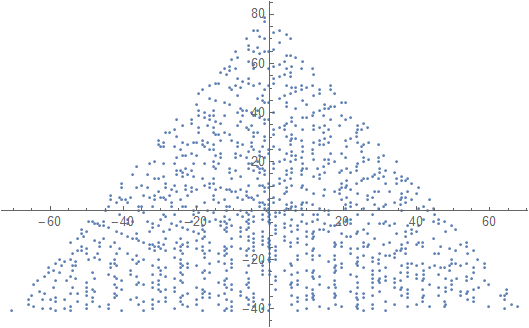 Being new to Python, there is surely room for improvement :) 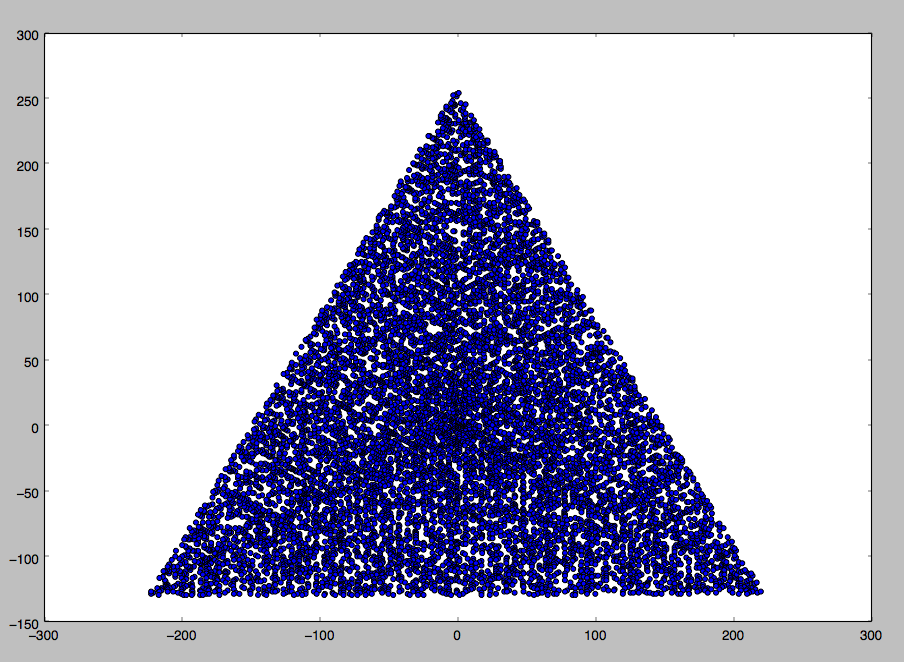 Uses only built-in functions, even for prime numbers. Given its vectorized approach instead of iterative, it is fast, but cannot handle huge numbers. 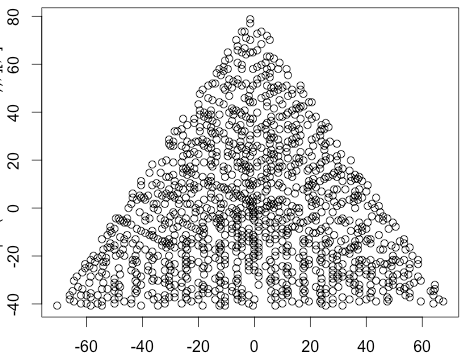 Not the answer you're looking for? Browse other questions tagged code-golf ascii-art graphical-output primes hexagonal-grid or ask your own question.