Here's a deceptively challenging geometry puzzle for you!

Given a circle A, and n other circles B[n], find the total area contained within A that is not within any circle of B.

Your code should be as short as possible.

Your input should contain the following information:

It shall be assumed that the center of circle A is the origin, that is, the point (0, 0).

You may receive input in any order, and in the form of text input (through stdin or your language's equivalent), function parameters, or command-line arguments.

If you choose to receive text input, there should be one or two-character printable ASCII delimiters between pieces of input.

Your program or function should output a single floating-point number representing the total area of A not within any of the circles of B. Your answers should be accurate to at least three significant figures for all test cases.

Your solution should not rely on sampling points within the circles to determine an area.

In each image, circle A is outlined in blue, with circles B outlined in green and filled black. The area that should be returned is filled red.

(Special thanks to Rainer P. for checking my solutions) 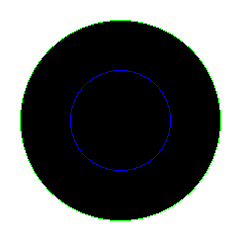 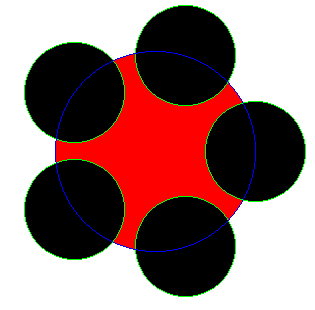 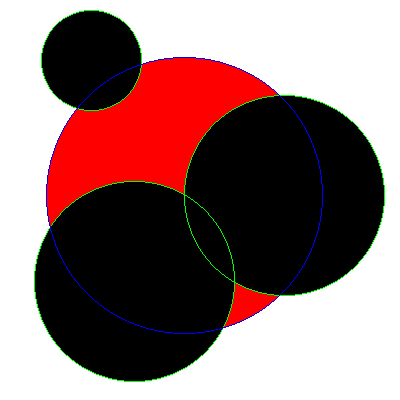 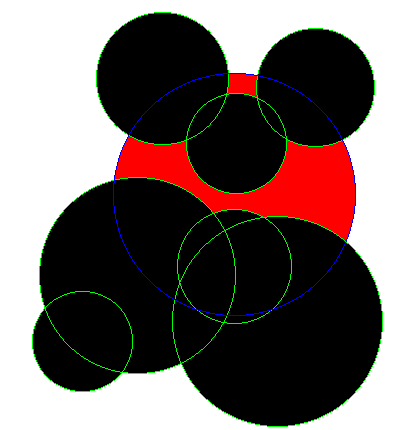 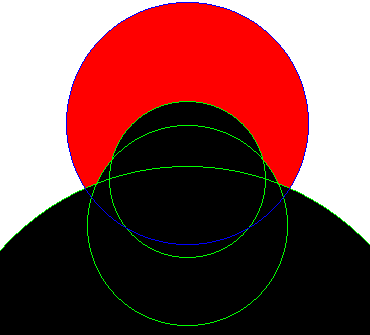 Line-breaks preceded by \ are for easy reading, and aren't counted in the score.

Reads input through STDIN as a list of (center, radius) pairs, where center is a complex number in the form X+Yj. The first circle in the list is A (whose center doesn't have to be at the origin), and the rest of the list is B. Prints the result to STDOUT.

This is a (longer, and much uglier :P) variation on my solution to Martin Büttner's Area of a Self-Intersecting Polygon challenge. It uses the same trick of breaking the problem down into small-enough pieces, for which it becomes more manageable.

We find the points of intersection between all pairs of circles (considering both A, and the circles in B), and pass a vertical line through each of them. Additionally, we pass all the vertical lines tangent to any of the circles. We throw away all the lines that don't intersect A, so that all the remaining lines are between the left and right tangents of A. 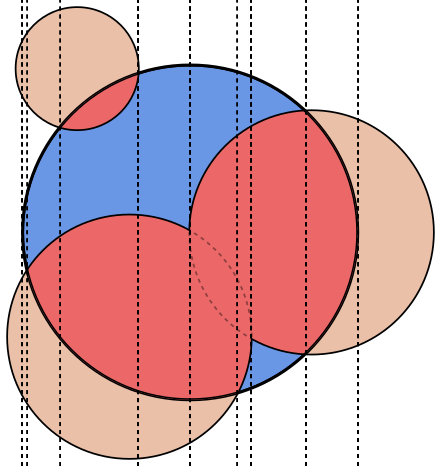 We're looking for the area of the intersection of A and the union of the circles in B—the dark red area in the illustration above. This is the area that we have to subtract from A to get the result.

Between each pair of consecutive vertical lines, this area can be broken down into a set of vertical trapezoids (or triangles, or line segments, as special cases of trapezoids), with an "excess" arc segment next to each leg. The fact that we pass as many vertical lines as we do guarantees that the bounded area is indeed no more complicated than that, since otherwise there would have to be an additional point of intersection, and hence an additional vertical line, between the two lines in question. 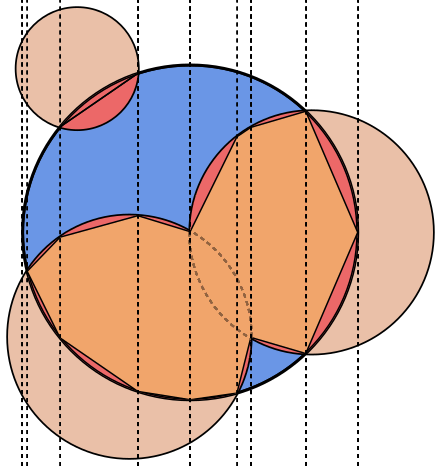 Not all of these arcs are relevant; we're only interested in the ones that are on the boundary of the intersection between A and the union of B. To find those, we sort the arcs top-to-bottom (note that the arcs may not properly intersect each other, since this would imply the existence of another vertical line between the two we're considering, and so it makes sense to talk about an arbitrary arc being above, or below, any other one.) 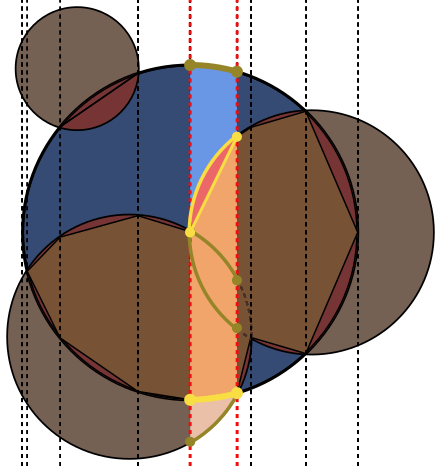 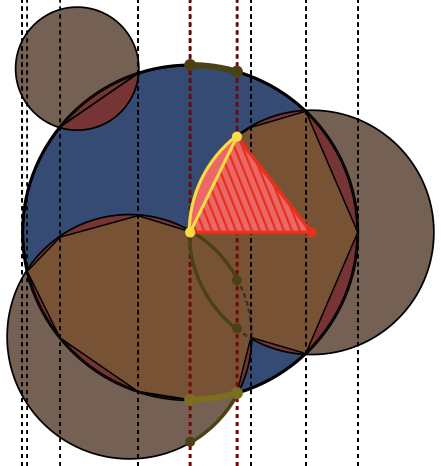 32
Area of a Self-Intersecting Polygon