Random with your hands tied [closed]

Ask Question
Asked 9 years, 4 months ago
Active 5 years, 11 months ago
Viewed 641 times
2
\$\begingroup\$
It's difficult to tell what is being asked here. This question is ambiguous, vague, incomplete, overly broad, or rhetorical and cannot be reasonably answered in its current form. For help clarifying this question so that it can be reopened, visit the help center.
Closed 9 years ago.

Develop some code to generate a psuedo-random number between X and Y (taken as input). Explain why or how it works.

Whoever gets the most upvotes for a new, innovative, out of the box, idea, wins.

simply takes the address of a variable, and maps it to [min, max]:

Pi is an irrational number. It decimal representation does not repeat.

I strongly suspect that it does not "favor" any of the base ten digits, 0...9, nor any numbers of length when one partitions the decimal into strings of d digits. This suspicion can later be informally checked using the code below.

The following will select integers between the integers x and y, where x is less than y.
y need not have the same number digits as x. The routine will begin at the cth digit of Pi. At the end of the procedure, the counter will be at c + n.

Note how the unsorted and untallied results maintain the order of Pi's digits: 314159... Note also that the result took just under 20 seconds. As we move further along, we'll encounter practical limits to how much we can process in a reasonable amount of time. But since this is merely an exercise in thinking out of the box, we'll ignore this limitation as we proceed.

When we tally and plot the results we see that Pi does not particularly favor any numbers in this range:

Notice that the integers between 7 and 78 were chosen more or less with equanimity. Further tests would show this holds up. 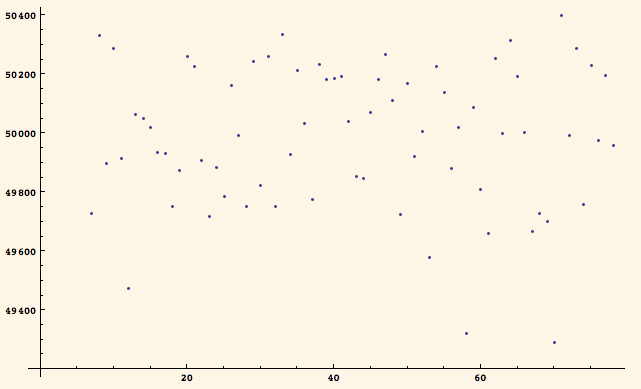 Similar checks should show whether or not Pi plays favorites with any numbers at all, regardless of how many digits it holds. [I checked for 1, 2, and 3 digit numbers over tens of millions of draws and found no bias starting from the beginning of Pi. A rigorous check would require more systematic examination or theoretical insights.]

First, here is a solution that was golfed, coming in at 30 characters:

This solution uses the process number of the program as the random seed, similar to using the location of the variables as a seed. It works the best when the min and max are small compared to the process number.

Here is a version that uses command line arguments, with 36 chars:

And here is a version as a subroutine that returns the random value (without printing to screen), with 29 chars:

Second, I am working on a solution that adheres to the strictest reading of the spec, which is that the program cannot be influenced by anything except the two arguments.

This is pretty disgusting really. Queries Twitter, via the JASONP API, for recent tweets containing the word "random", then it uses the ID's of each of the returned tweets to calculate the "random" number.

You might want to wait a few seconds in between each call of the function, also it doesn't return a value, it just outputs one to the console. (Told you it was disgusting).

You can try it here.

Mersenne twister algorithm. It can probably be golfed some more.

Where s is the seed, and t is the number of numbers to generate.

Not the answer you're looking for? Browse other questions tagged popularity-contest or ask your own question.