The Vigenère cipher was a simple polyalphabetic cipher that basically applied one of several Caesar ciphers, according to a key. Bascially the letters in the key indicate which shifted alphabet to use. To that end there was a simple tool, called the Vigenère square: 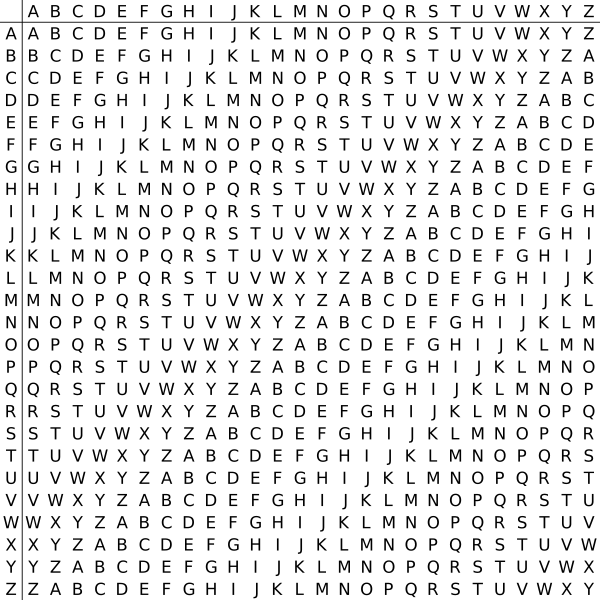 Here each row is a separate alphabet, starting with the corresponding letter of the key. The columns then are used to determine the ciphered letter. Decryption works in very much the same fashion, only vice-versa.

Suppose we want to encrypt the string CODEGOLF. We also need a key. In this case the key shall be FOOBAR. When the key is shorter than the plaintext we extend it by repetition, therefore the actual key we use is FOOBARFO. We now look up the first letter of the key, which is F to find the alphabet. It starts, perhaps unsurprisingly, with F. Now we find the column with the first letter of the plaintext and the resulting letter is H. For the second letter we have O as the key letter and the plain text letter, resulting in C. Continuing that way we finally get HCRFGFQT.

Your task now is to decipher messages, given a key. However, since we have outgrown the 16th century and have computers we should at least support a slightly larger alphabet:

The construction of the Vigenère square is still very much the same and the cipher still works in the same way. It's just a bit ... unwieldy to give here in full.

Input is given on standard input as two separate lines of text, each terminated by a line break. The first line contains the key while the second contains the ciphertext.

Since encryption is sometimes regarded as a weapon, the code should be short to facilitate easy smuggling. The shorter the better, as it reduces the likelihood of discovery.

A week has passed. The currently shortest solution has been accepted. For those interested, in our contest we had the following submissions and lengths:

And our own solutions that weren't ranked with the others:

No tricks in this one!

Base64 encoded binary (following this link for a decoder)

Doesn't completely meet the spec since it's defined as a verb rather than taking input, but I'm posting it anyway with the intention of fiddling with it at a later date.

Probably not the best, but hey:

Still needs to be golfed more. For now, T is the text, K is the Key, L is the list of letters

Probably much longer than it needs to be. Still trying to get my head around GS.

Heres the "ungolfed" and commented version

Doesn't quite beat the listed VB.NET score (but I'm getting close):

Thanks to Joey for the tip!

A bit late but .. (lines broken to avoid horizontal scrollbar).

A discussion about the process of golfing this code can be found here: http://prob-slv.blogspot.com/2013/04/code-golf.html