This is the cops' thread. The robbers' thread goes here.

Write a program or function consisting only of printable ASCII characters (that excludes tab and newline) that outputs at least 5 printable ASCII characters in ascending order (from space to tilde / 32 to 126). Characters can be outputted several times, as long as they are adjacent to each other. A single trailing newline is accepted. You must provide the full output, and for every 6 characters in your code you must provide one character in your code, at the position it appears. If your code has 5 or less characters, then you have to reveal only the length. You shall not reveal more than 1 character per 6 in your code.

So if your code alphaprinter outputs the alphabet from a-z, then you need to reveal 2 characters of your code (use underscore for the others), for instance:

Note: The robbers only need to find a code that produces the same output. The language, the length of the robbers solution, and the position of the revealed characters must also match.

In order to claim the win you need to reveal the full code (after 7 days).

If the code is cracked, insert [Cracked](link to cracker) in the header. If the submission is safe, insert "Safe" in the header and reveal the full code in your answer. Only answers that have revealed the full code will be eligible for the win.

You can try Hexagony online

The ` is just misdirection to make the code look like it requires side-length 3. Unless the interpreter is executed with -d the backtick is simply stripped from the source code before determining the layout. Afterwards, the code fits into side-length 2:

This moves the memory pointer (MP) around one hexagon of the memory grid, while copying the value to the next edge, incrementing it and printing it.

This is what the memory grid looks like, with the MP starting the marked position: 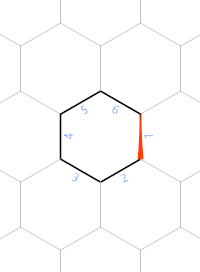 Initially all edges are zero. The first & is a no-op, but ) increments the edge and ! prints the 1. Then " moves back to the left (the edge labelled 2). There, & copies a value. Since the edge is currently zero, the left neighbour (in the direction of the MP) will be copied which is the 1 we just printed. ) increments it, ! prints the 2. This continues as long as we're visiting new edges and we print all digits up to 6. When we hit the edge we started on, & will copy the right neighbour instead (because the edge value is positive), so the edge becomes 0 again, and control flow jumps to the last row, where @ terminates the program.

I somehow managed to delete the original in the space of a week, but I think this is right:

I made this one for the robbers. It is definitely not going to be the winning submission :)

I tested it here.

Hint: Don't try to find programs generated by online generators haha. This was handwritten and can only be solved by logical thinking :)

You can try CJam online.

I thought basing a cop on a generalised quine was pretty clever and novel. The moment I posted this, I realised that __ and er are completely useless, which is why I posted the 8-byte CJam cop for a more competitive score. Pietu cracked that one rather quickly, so I was afraid he'd figure out this one as well. I suppose the unnecessarily convoluted character transliteration saved it.

Anyway, the code takes its own characters (except the _~), XORs each one with 19 for obfuscation and then sorts them.

This cop led me to the "discovery" of xorting, although I'm not actually using it here (and it would probably be near impossible to make use of it with a short generalised quine).

(note the leading space), and nothing else!

Explanation (*n refers to the nth cell in memory):

The last two commands turn out to be sufficient to prevent 1 from ever being incremented again on subsequent passes through the program, which means nothing is ever again printed, though it will go on setting all memory addresses from *36 onward to the value 36 forever.

Not promising to win, but hopefully fun to crack:

This is a function that returns:

user81655 cracked it character by character:

Regarding the new language restrictions: It also works in Octave.

Output (in Matlab): (ans = \n\n is not part of the output, the output is just the last line)

We are basically looking at this function, converted to ASCII values. 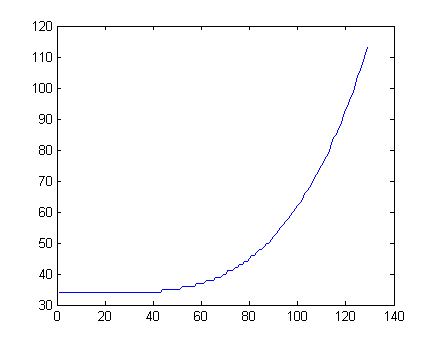 I think this will not be so hard. We will see.

Congrats to Adnan! You scare me.

Here, you can test your submission, to see how many characters must be removed.

Cat attempted to cracked it here

What'd you say? My cousine is involved?

This method is relatively simply as it prints up to 64 characters starting at chr(32). The obscuring part is, that the iterator i is not incremented linearly. It's incremented by it's own cosine value which will result in repeated and missing characters.

You can try CJam online.

I'm an idiot. I forgot to implement power function (-_-｡). Here is the obfuscated code:

My original code was:

Note, I have a power function implemented right now. So this could be done in six bytes:

This is my first coppers-post. I think/hope it's not too hard or too obvious.

creates this output (there are 5 spaces at the beginning; total length is 7740 characters):

I kinda cheated by putting a space for every 6th character. Oh well...

I cheated again by using a text-to-Malbolge generator for this code.

Output is here. The entire output has 838,316 characters and a trailing newline.

Stable version of the compiler working in Octave hopefully coming soon. Meanwhile, this GitHub commit works, and in particular runs the original code that produces the indicated output

My original code was:

I suppose I should have gone for more characters and revealed one of the !, because Adnan's solution only grows linearly when adding more !, while mine grows quadratically.

This is a function that will return the string

Output is in the JS console of a browser like Chrome/Firefox.
Original code (which might be invalid):

You can try Pyth here

Shouldn't be too difficult, even if the result is not exactly what you'd expect.

All one line, since the rules prohibit newlines. Tested using http://www.quirkster.com/iano/js/befunge.html .

Edit: This is legally cracked since I didn't specify a version, but note that there's a Befunge-93 solution still out there.

Adnan found a trivial crack: obviously, I didn't think this puzzle through well enough. I've composed another instead.

This outputs the string abcde.

Not the answer you're looking for? Browse other questions tagged cops-and-robbers or ask your own question.