Encode a steganographic encoder into a package

By steganography we mean hiding a message along an existing text or image so the result would be unsuspicious of the existence of the original message. This challenge is about hiding data in Unicode variants of a grapheme called homoglyphs. For instance: cyrillic Е (ye) appears the same as latin E which appears the same as greek Ε (epsilon). They are all glyphs from an archetypical E grapheme and several fonts renders them the same. This allows us to hide three units of information (0 1 2) in just one character. A whole text makes room for a complex message.

Terms: A package (steganographic unsuspicious text) is a payload (message) encoded into a carrier (raw text)

Create a coded character set with 6 bits, 7 bits,... as much as characters your chosen language requires. You can use ASCII (8 bits) but be aware of wasting carrier capacity.

Pyth for instance requires 7 bits because it maps from 32 to 126 ASCII codes.

IMPORTANT NOTE: this is NOT BINARY MAPPING. For instance there are five 'M' and 'v' homoglyphs (0 1 2 3 4). Binary mapping QＱ (0 1) is almost trivial (less than 100 bytes of steganographic encoder size)

“De Chamilly obeyed; he reached Basle, and on the day and at the hour appointed, stationed himself, pen in hand, on the bridge. Presently a market-cart drives by; then an old woman with a basket of fruit passes; anon, a little urchin trundles his hoop by; next an old gentleman in blue top-coat jogs past on his gray mare. Three o'clock chimes from the cathedral tower. Just at the last stroke, a tall fellow in yellow waistcoat and breeches saunters up, goes to the middle of the bridge, lounges over, and looks at the water; then he takes a step back and strikes three hearty blows on the footway with his staff. Down goes every detail in De Chamilly's book. At last the hour of release sounds, and he jumps into his carriage. Shortly before midnight, after two days of ceaseless travelling, De Chamilly presented himself before the minister, feeling rather ashamed at having such trifles to record. M. de Louvois took the portfolio with eagerness, and glanced over the notes. As his eye caught the mention of the yellow-breeched man, a gleam of joy flashed across his countenance. He rushed to the king, roused him from sleep, spoke in private with him for a few moments, and then four couriers who had been held in readiness since five on the preceding evening were despatched with haste. Eight days after, the town of Strasbourg was entirely surrounded by French troops, and summoned to surrender: it capitulated and threw open its gates on the 30th of September 1681. Evidently the three strokes of the stick given by the fellow in yellow costume, at an appointed hour, were the signal of the success of an intrigue concerted between M. de Louvois and the magistrates of Strasbourg, and the man who executed this mission was as ignorant of the motive as was M. de Chamilly of the motive of his.”

If you run out of carrier characters (very unlikely and maybe you'll need to optimize further, but I'm not sure) duplicate the carrier.

NOTE: Please be aware this solution is based on binary mapping (each char carries a 0 or 1 value) so it is far easier than the challenge.

This is the package: a steganographic encoder encoded by itself into the challenge carrier. It could be retrieved again by means of its steganographic decoder (Pyth at footnote) and its coded character set. It is rendered here by an adverse font to contrast homoglyphs. 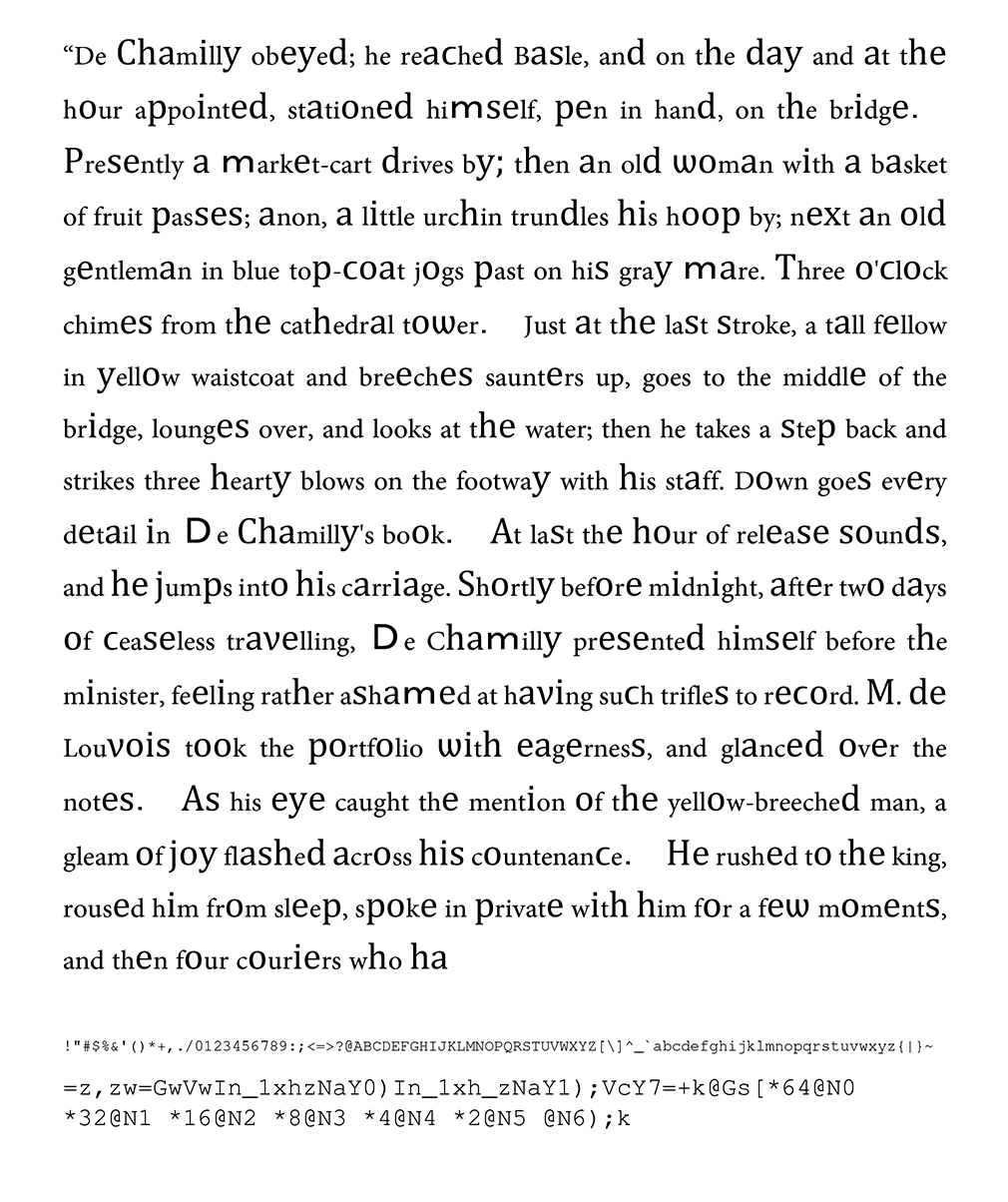 This is binary mapping: we will assign a 0 to latin ordinary graphemes, and 1 to their homoglyphs

Browse other questions tagged code-challenge unicode steganography or ask your own question.

5
Add an integer to a set and take it back out
7
Can you beat the optimizer?
7
Crafting Canonically Cöcher Crosswords
14
Bacon's cipher: An Intro to Steganography
40
Sharing (characters) is Caring!
52
Goodbye Cruel World!
19
Doubled-letter steganography
14
Source permutation