The goal of this challenge is to produce an animation of a chain drive system, comprised of a set of sprocket gears connected together by a chain.

Your program will be given a list of sprockets, specified as (x, y, radius) triplets. The resulting chain drive system is comprised of these sprockets, connected together by a closed taut chain passing over each of them, in order. Your goal is to produce an infinitely looping animation, showing the system in motion. For example, given the input

The coordinate system should be such that the x-axis points right, and the y-axis points up. You may assume that the radii are even numbers greater than or equal to 8 (we'll see why this matters later.) You may also assume that there are at least two sprockets, and that the sprockets don't intersect one another. The units of the input are not too critical. All the examples and test cases in this post use pixels as the input units (so, for example, the radius of the middle sprocket in the previous figure is 24 pixels;) try not to deviate too much from these units. In the rest of the challenge, spatial quantities are understood to be given in the same units as the input—make sure to keep the proportions right! The dimensions of the output should be slightly bigger than the bounding box of all the sprockets, big enough so that the entire system is visible. In particular, the absolute positions of the sprockets should not affect the output; only their relative positions should (so, for example, if we shifted all the sprockets in the above example by the same amount, the output would remain the same.)

To keep things simple(r), you may assume that no sprocket intersects the convex hull of its two neighboring sprockets, or the convex hulls of each of its neighbors and their other neighbor. In other words, the top sprocket in the diagram below may not intersect any of the shaded regions.

Chain segments may intersect sprockets other than the ones they pass over (such as in the last test case). In this case, the chain should always appear in front of the sprockets. 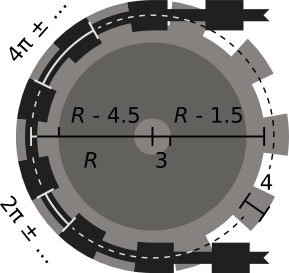 You may use any combination of colors for the chain, the different parts of the sprocket, and the background, as long as they are easily distinguishable. The background may be transparent. The examples in this post use

The first sprocket in the input list should rotate clockwise; the rest of the sprockets should rotate accordingly. The chain should move at a speed of about 16π (about 50) units per second; the frame rate is up to you, but the animation should look smooth enough.

The animation should loop seamlessly.

Some of the visual attributes and proportions are intentionally specified only roughly—you don't have to match them exactly. Your program's output doesn't have to be a pixel-to-pixel replica of the examples given here, but it should look similar. In particular, the exact proportions of the chain and the sprockets, and the exact shape of the chain's links and sprocket's teeth, are flexible.

As a final note, while, technically, the goal of this challenge is to write the shortest code, if you feel like getting creative and producing a more elaborate output, by all means, go for it!

Write a program or a function, taking a list of sprockets, and producing a corresponding chain drive system animation, as described above.

You may take the input through the command line, through STDIN, as function arguments, or using an equivalent method. You may use any convenient format for the input, but make sure to specify it in your post.

As output, you may display the animation directly, produce an animation file (e.g., an animated GIF), or produce a sequence of frame files (however, there's a small penalty in this case; see below.) If you use file output, make sure the number of frames is reasonable (the examples in this post use very few frames;) the number of frames doesn't have to be minimal, but you shouldn't produce too many superfluous frames. If you output a sequence of frames, make sure to specify the frame rate in your post.

This is code-golf. The shortest answer, in bytes, wins.

+10% Penalty  If your program produces a sequence of frames as output, instead of displaying the animation directly or producing a single animation file, add 10% to your score.

This isn't super-duper golfed really; it's minified - partly by hand - but that's nothing special. It could no doubt be shorter if I'd golfed it more before minifying, but I've spent (more than) enough time on this already.

Edit: Ok, so I spent more time on it and golfed the code more before minifying (very manually this time). The code's still using the same approach and overall structure, but even so I still ended up saving 642 bytes. Not too shabby, if I do say so myself. Probably missed some byte-saving opportunities, but at this point even I'm not sure how it works anymore. The only thing that's different in terms of output, is that it now uses slightly different colors that could be written more tersely.

Edit 2 (much later): Saved 18 bytes. Thanks to ConorO'Brien in the comments for pointing out the blindingly obvious that I'd totally missed.

Edit 3: So, I figured I'd reverse engineer my own code, because, frankly, I couldn't remember how I'd done it, and I lost the ungolfed versions. So I went through, and lo and behold found another 316 bytes to save by restructuring and doing some micro-golfing.

The function above appends an SVG element (including animations) to the document. E.g. to display the 2nd test case:

Seems to work a treat - at least here in Chrome.

Try it in the snippet below (clicking the buttons will draw each of OP's test cases).

The code draws the chain and gear teeth as a dashed strokes. It then uses animate elements to animate the stroke-dashoffset attribute. The resulting SVG element is self-contained; there's no JS-driven animation or CSS styling.

To make things line up nicely, each gear's ring of teeth is actually drawn as a path consisting of two arcs, so the path can start right at the tangent point where the chain touches. This makes it a lot simpler to line it up.

Furthermore, it seems there's a lot of rounding errors when using SVG's dashed strokes. At least, that's what I saw; the longer the chain, the worse it'd mesh with each successive gear. So to minimize the issue, the chain is actually made up of several paths. Each path consists of an arcing segment around one gear and a straight line to the next gear. Their dash-offsets are calculated to match. The thin "inner" part of the chain, however, is just a single looping path, since it isn't animated.

Not golfed at all, but works (I think)

This solution is the result of reverse engineering of @Flambino's solution, I post it with his accord.

Not the answer you're looking for? Browse other questions tagged code-golf graphical-output geometry animation or ask your own question.