Spherical excess of a triangle

Spherical excess of a triangle

As we all know, the sum of angles of any planar triangle is equal to 180 degrees.

Both sides and angles of spherical triangle are measured in the term of angle measure, because each side can be considered as a intersection of the sphere and some planar angle with vertex at the center of the sphere: 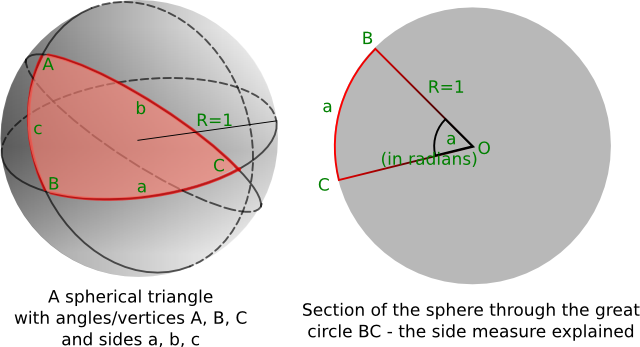 Each three distinct great circles define 8 triangles, but we only take proper triangles into consideration, ie. triangles whose angle and side measures satisfy

It's convenient to define vertices of a triangle in terms of geographic coordinate system. To compute the length of an arc of sphere given the longitude λ and latitude Φ of its ends we can use formula:

The two basic formulas that can be used to solve a spherical triangle are:

Given three sides, it's easy to compute the angles using the cosine rule:

Finally, the spherical excess of a triangle is defined:

What's interesting about the relation between the spherical excess of a triangle and its area:

So on a unit sphere, the excess of a triangle is equal to area of that triangle!

Write a function or a program that will compute spherical excess of a triangle in degrees given the triangle vertices coordinates. The vertex coordinates are provided in terms of geographic coordinate system.

The latitudes and longitudes are always integer in the test cases.

The answers with error less than one degree will be accepted (as in examples below). The result can be rendered as both real or integer therefore, up to your convenience.

In all test cases longitude and latitude are integer numbers. Parsing the vertex coordinates is the part of the task, so a vertex must be passed as single string/literal , it's not allowed to pass 80N20E as four parameters/strings: 80, N, 20, E.

This is guaranteed that vertices are all distinct and neither two of the three vertices make an antipodal points pair.

This is code-golf, so the shortest code wins.

Here the commented version that should explain what is going on:

Fully golfed (linebreaks can be removed):

New constant r = 180/PI defined and used throughout function. e had to be initialized to +PI, so excess now counts downwards and is negated before returning.

t[] eliminated: Ruby allows the data that was assigned to t[] to be directly assigned to u,v,w.

Single i loop to do the job of two, ?: ternary operator switches between tasks.

Many other minor changes.

Requires an array of 3 strings.

The lengths of the triangle sides on the unit sphere are equal to the angles between the vectors describing the two points. But we don't need to know that angle. It suffices to know the cosine of the angle, which is easily obtained from cartesian coordinates using the Dot Product.

The input strings are converted into a string representation of an array, which is then evaluated and stored in t, as below. The final zero is not needed if two coordinates are given. If only latitude 90 is given, the zero is interpreted as the longitude.

The Dot Products are of the form a.b=ax*bx+ay*by+az*bz. As the vectors are all of unit length, the dot product is equal to the cosine of the angle between the vectors.

In order to calculate them a loop is iterated 6 times passing twice through the input data. On even iterations 0,2,4 the variables x,y,z are set to 1 to start a new calculation. On each iteration these variables are multiplied by the x,y and z components of each vector, using the longitude and latitude data stored in t[0],t[1] (which for golfing reasons is also assigned to u,v). The sum of the variables is written to array n (the garbage values on even iterations being overwritten by the correct values on odd iterations) so that at the end n contains the 3 dot products [a.b, c.a, b.c].

For the cosine rule, we need the cosines of the three included angles between vertices, but we also need the sines. These are obtained as sqrt(1-cosine**2). As the sines are multiplied together the expression can be rearranged so that only one call to sqrt is required. The fact that we do not know if the sine was positive or negative does not matter, as the haversine formula always gives the positive sine anyway. The important physical quantity is the distance between the points, which is absolute and therefore always positive.

For each iteration i=0..2, we calculate the value for the angle opposite array element i-1 using the other elements i and i-2. Negative array subscripts like this are legal in Ruby, they just wrap around to the beginning of the array.

Requires three sets of coordinates on the same line, with spaces between them.

Not the answer you're looking for? Browse other questions tagged code-golf geometry trigonometry or ask your own question.