Determine the color of a chess square

Your challenge is to write a program that outputs the color of a given square from the chessboard. This is how a chessboard looks:

You can see that the square a1 is dark, and h1 is a light square. Your program needs to output dark or light, when given a square. Some examples:

3 bytes thanks to Mego for string interlacing

The source code uses the CP437 encoding. Try it online!

Unfolded and with annotated execution paths: 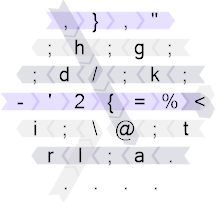 The purple path is the initial path which reads two characters, computes their difference and takes it modulo 2. The < then acts as a branch, where the dark grey path (result 1) prints dark and light grey path (result 0) prints light.

As for how I compute the difference and modulo, here is a diagram of the memory grid (with values taken for the input a1): 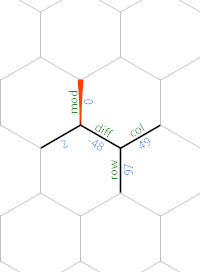 Diagram generated with Timwi's even more amazing Esoteric IDE (which has a visual debugger for Hexagony).

This might be golfable by a few bytes by reusing some of the ;, but I doubt it can be golfed by much, certainly not down to side-length 3.

s/[1357aceg]//g removes all odd-indexed coordinates. The resulting pattern buffer then has length of 1 for "light" or length of 0 or 2 for "dark". /^.$/ matches the 1-length patterns, changes the pattern to "light" and quits. Otherwise the pattern is changed to "dark".

Interpret the input as a base 35 number, chop lightdark in half, print.

My first real BrainFuck program, thank Mego for the help and for pointing me to the algorithm archive. (That means I didn't really do it on my own, but copied some existing algorithms. Still an experience=)

This is of course the translation from my brainfuck answers:

I stole two code snippets for divmod and if/else from here. (Thanks to @Mego!)

Now we have the cells config >sum 2 we now perform the divmod algorithm:

The output of the divmod looks like this 0 d-n%d >n%d n/d but we zeroed the d-n%d and are zeroing the next cell too:

Fill one cell up to the value 100 for easier outputting:

Try it online (you will have to manually enter the input; the permalinks don't like quotes)

Tested on a TI-84+ calculator.

Here's a more interesting variation on the third line, which sadly is exactly the same size:

You'd think TI-BASIC would be decent at this challenge, since it involves modulo 2. It's not; these solutions seem to be the shortest possible.

We spend a lot of bytes to get both characters in the string, but what really costs is the thirteen two-byte lowercase letters.

All credit to Linus who suggested this 31-byte solution:

Test it using this interpreter.

Thanks DigitalTrauma for lots of golfing tips

Japt is a shortened version of JavaScript. Interpreter

Or, alternatively, a magic formula: (26 bytes)

Unfortunately the strings dark and light can't be compressed.

Here it is with the different path segments highlighted:

Try it here (Firefox only).

I save a worthy 2 bytes by quoting out "light" and "dark" with a single quote so that Clojure takes it as a literal, as opposed to wrapping each word in a pair of quotation marks. I also save a few bytes by using pr rather than println.

Some info on quoting in Clojure

Expects an environment where ints are stored little-endian, and are at least two bytes.

This means we can simplify to

and simply flip the strings to correct for the parity.

Light green - An even odd testing construct. The loop will exit to the left if the beam is even or the right if odd.

This does what it is required to do, with no additional benefits.

I do not think this needs any explanation=)

Probably still golfable, but I think I'd need another approach.

,>, reads input into Chuck, replacing the two Is. Next is the following part of the code:

which decrements both input elements until the latter (i.e. the digit) reaches zero. This stops Brian's ? from passing control to Chuck, continuing on.

The next + increments the zeroed digit to a 1 so that following uses of { don't get caught on it. At this point, the first cell of Chuck's tape has the difference of the two code points, so now we need to take the code point modulo 2. This is done with the following parts:

I've labelled the three parts on Brian's tape to make things easier to explain. The {- in parts A and B decrement the first cell on Chuck's tape, and the following ? checks if it's zero. If it's not, then control is passed, and we execute }<<<?. For part A, this moves us to part B. For part B, this moves us to part C, which immediately passes control and we execute {<{<<<?, sending us back to part A. Thus the effect is that we alternate between parts A and B, in a state machine-like way.

Now whether the first cell was zeroed while we were in part A or part B determines what we print. For A, we have:

which executes >}< to position us on the last ? in Chuck's tape, and then runs >. five times to print "light".

On the other hand, for part B, we have:

which executes >}>> to position us on the first . in Chuck's tape, and then runs >. four times to print "dark".

Because Batch lacks disjunctional conditionals. -18 bytes thanks to @dohaqatar7, and more due to his idea.

22
Find the Semordnilaps
47
Halloween Golf: The 2spooky4me Challenge!
46
Product over a range
23
Product over exclusive and inclusive ranges
45
Zigzagify a Matrix
30
Subsequence Substitution
5
Make the lowest number square that equals n
44
Draw an ASCII chess board!
82
Output the sign
24
Round up my number