On the Subject of Keypads

Keep Talking and Nobody Explodes is a local multiplayer game where one player has control over a virtual "bomb", and has to be guided by another player, the "expert", who has access to a bomb defusal manual. One of the modules to be disarmed in the game is the keypad module, which is what we'll be dealing with in this challenge.

Input will start with a single line of printable ASCII characters except space (0x21 to 0x7E). These represent the keypad buttons visible to you.

The next few lines will represent "keys" – only one line will contain all of the characters of the first line, not necessarily in order. Your task is to output the keypad characters, in the order of the matching key line.

For example, if the input was

then the keypad buttons are 5, ~, F and y. Only the 4th key line ~Fi(&5gy contains all of these characters, so we output the keypad characters in the order in which they appear, i.e. ~F5y.

Output: 0b~. The 4th key line already contains the characters in the right order.

Output: n1j@o<G. The key line is the second last line.

This is code-golf, so the code in the fewest bytes wins.

@Lz.z: Filter all lines for the intersection with the first line.

The first line defines a helper function g, the unnamed function on the second line is my answer.

The algorithm is the obvious one: split input into lines, find the line that contains all characters of the first line, and filter out all the other characters on that line.

This could have been a nice challenge for Prolog if it hadn't been for the combined requirements of multiline input and unescaped characters ' and " in the input. A big chunk of the code (p and r) exist to read a file as character codes which is what I had to do to take unescaped input on several lines.

How to run
Program is run with command:
p.
File namned t containing input has to be in the same directory.

Edit: Saved 14 bytes by unifying 2 q-clauses with OR.

This ended up being a very sloppy piece of code...

When being run, an input dialog is opened where a multi-line string can be pasted into (newlines are converted to spaces and the output will be a cell with 1 very long string). I chose to convert the resulting cell to a char which makes it possible to split at the spaces (result is a cell array) and then again convert to char to retrieve the intended shape. MATLAB's built-in ismember function does a good job here in comparing our first line to the other lines.

After that it gets nasty... I've tried a lot of ways to exclude the first line from my 'best match' check and ended up with this. We look for the line and then use this information to grab the indices (by converting our ismember output to logicals) that we want our output characters from. 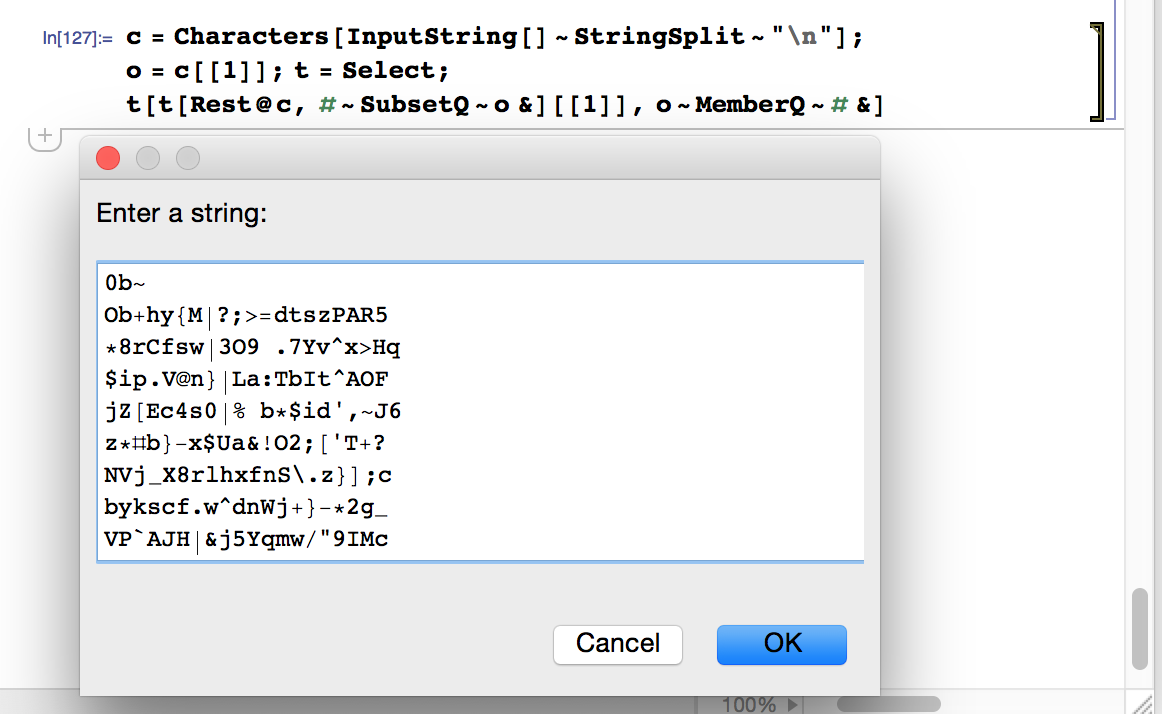 Explanation of the code : First with InputString we get the full string of input, then we get the first set of letters by splitting the string by newline, and saving all the characters of the first one in variable o. Next, we select from the rest of the input lines those lines that have the first line's characters (saved as variable o) as a subset. Then with that line selected, we grab the members of that line that are in the original set.

Edit : Thanks to Martin Büttner for the tips on using infix notation and my unnecessary variables

10
Play a Perfect Game of 4x4 Hex
10
On the Subject of Passwords
38
Lemon-Limify a String
20
Highlight the Bounding Box, Part I: Cartesian Grid
17
Overlapping Line Ordering
16
Line up the Diagonals of a Grid of Text
35
Exchange capitalization
20
On the Subject of Memory
14
Snap (card game)