In Vernor Vinge's excellent and fascinating book A Deepness in the Sky (which, by the way, I highly recommend1), the Qeng Ho, a culture that spans various star systems, has no notion of "days," "months," "years," etc., and hence has a unique timekeeping system that measures time entirely in seconds. The most commonly used units are the Ksec (kilosecond), Msec (megasecond), and Gsec (gigasecond). Here's a handy chart from my own copy of the book (since I can't find it online): 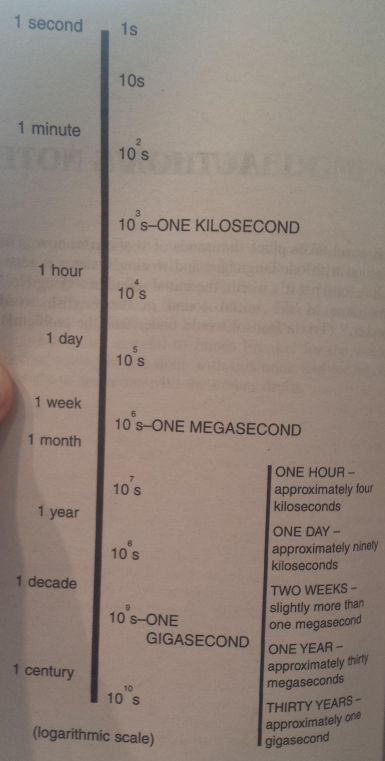 You are currently flying on the Pham Nuwen, and you have just received a message from a strange, unknown planet called "Earth."2 They use different time units than you do, and your computers don't recognize theirs. As the resident Programmer-Archaeologist of the ship, your job is to patch the time-handling code so that it recognizes Earth units of time.

Naturally, since you're only out of coldsleep for another few Ksecs, you want to make your code as short as possible so it can be written quickly. Fortunately, as an interstellar trading culture, the Qeng Ho has access to every programming language invented.

The input will be a single string containing one or more space-separated components. A component is defined as an integer number > 0 and ≤ 255, then a space, and then one of second, minute, hour, day, week, month, year, decade, or century, possibly plural (with an added s, or centuries for the last case).

Here are some valid example inputs:

You may assume the following about the input:

Here are what the various input units mean, for the purposes of this challenge:

Here are the Qeng Ho units which your code has to support:

Use the following algorithm to determine your code's output:

You may have your choice of which of the following methods to use: rounding up, rounding down, rounding away from zero, or rounding towards ∞ or -∞. If the rounded result ends in 0, you may either remove trailing zeroes or keep as many as you want (or do both, depending on the input).

If the rounded result is exactly 1.000, you must use the singular form (second, Ksec, Msec, Gsec); otherwise, use the plural form (seconds, Ksecs, Msecs, Gsecs).

You may always assume that the input is in descending order of units (century, decade, year, etc.); furthermore, the component that comes after any given unit will always be shorter (that is, 1 decade 20 years is invalid input).

Note: results marked with an asterisk (*) may vary by a negligible amount due to rounding differences.

1: only if you like hard scifi, of course. In which case I recommend reading A Fire Upon the Deep first, which is (in my opinion) even more fantastic.

2: well, technically "Old Earth" is mentioned several times in A Deepness in the Sky, but...

Thanks to ngn for shaving off 13 bytes.

Must have ⎕IO←0, which is default in many APLs.

⍵⊣ discard that in favour of the given argument

↑ mix the pairs into a 2-column matrix.

×/ multiply along the rows, yielding a list of counts of seconds

N←⌊ let N be the floor of that (i.e. the order of magnitude of T)

1≠ yield 1 if that is different from 1, but 0 otherwise

1. 3⍕N the string consisting of N rounded to 3 decimal places

'(…)'sec', prepend the 2-element list consisting of the following and the string "sec":

Because nothing says "cower before our technological superiority" better than line numbers and GOTO statements :-)

h: After breaking up the input string into a list of quantity magnitudes and units, Capitalize and Pluralize convert the input units into Mathematica Quantity's, from which the total number of seconds is derived.

d converts seconds to the appropriate units. The final s is removed if the time corresponds to 1 unit (of any kind).

With minor adjustments in the code, this approach should work for conversion of natural language input into any measurement system, conventional or not.

I'm reasonably sure I'm missing so many golfing opportunities here…The price of being a golfing beginner I guess.

My answer is a function taking a string containing the Earth time as an input parameter and returning the Qeng Ho time.

P.S. : I stupidly forgot about the 3 digits precision…which does drive the byte count up.

P.P.S. : Better chosen top-level expressions shaved off 10 bytes…and it should now be accurate to boot.

18
The Time Traveler
8
Shortest script that gives the time passed since a Unix timestamp
18
Incremental Game Time Format
6
Arbitrary Clock Time Calculator
14
The time after some time
8
A Fractional Year
22
Are we then yet?
12
What time is it in unicode?
23
128 years? Hypothetical leap year reform
14
Eight days a week