Carrots. So. Many. Carrots

Damn, that's a lot of carrots. 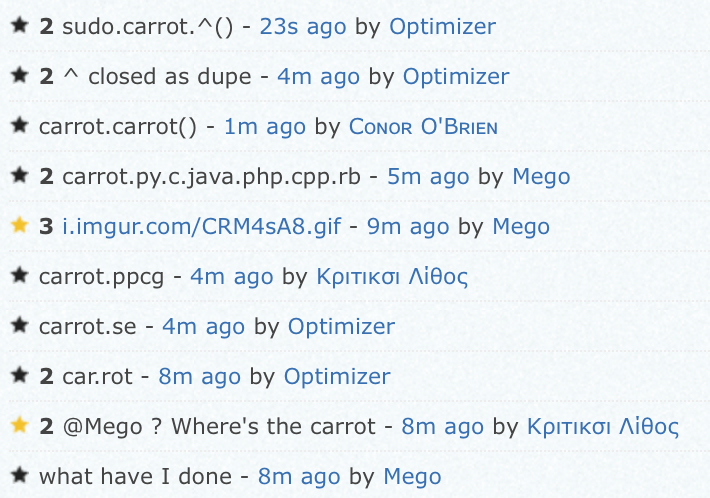 You must create a program, that, in as many languages as possible, replaces every instance of ^ with a markdown formatted link (meaning that if I was to post it in an answer, it would automatically read it as an image and place the image instead of the words) of this upward facing carrot.

How to Use Said Formatting:

First, anywhere in the file, put in the link like so (this is what I did for this question):

And then, wherever you want it:

There's a lot trivial esolangs to fit... (including 9001 BF variants)

Don't be that guy.

Note: Yes, this program will be slightly trivial in languages with regex support. However, the competition is to see how many languages the competitors can use.

I'll go into detail on each component if anyone wants, but what's important is that all of them read the first and second lines of the codebox and output the characters at the appropriate times. Also, I decide between Befunge and Minkolang/><> by the use of \, which swaps the top two values of the stack in the first and is a mirror in the other two. To separate Minkolang and ><>, I use !v#. ! is an unconditional trampoline in both languages, but # is an omni-directional mirror in ><> and a no-op in Minkolang. From then on, each language executes code in its own component.

Requires the -x command line flag when run with python. the Xs can be replaced with any character. The end-of-line number signs (and the number sign at the beginning of the first line that starts with a semicolon) are present to avoid befunge trying to execute the invalid instruction ; (which starts a comment in lisp). There is no trailing space on any of the lines.

Saved two bytes by replacing 55+ with a to print a newline.

I know it is only one language at the moment but I thought we can't really have a challenge about carrots that isn't answered in Carrot.

Saved 2 bytes thanks to @KritixiLithos.

Not the answer you're looking for? Browse other questions tagged code-challenge string polyglot or ask your own question.

71
Write a polyglot that prints the language's name
7
Write an URL compressor
193
I'm not the language you're looking for!
165
Trick or Treat polyglot
20
Print your char count in words, in many languages