Create the shortest program or function that finds the factorial of a non-negative integer.

The factorial, represented with ! is defined as such

Your code should perform input and output using a standard methods.

The shortest submission wins, in the case of a tie the answer with the most votes at the time wins.

Getting started with Golfscript -- Factorial in step by step

Here's something for the people who are trying to learn golfscript. The prerequisite is a basic understanding of golfscript, and the ability to read golfscript documentation.

So we want to try out our new tool golfscript. It's always good to start with something simple, so we're beginning with factorial. Here's an initial attempt, based on a simple imperative pseudocode:

Whitespace is very rarely used in golfscript. The easiest trick to get rid of whitespace is to use different variable names. Every token can be used as a variable (see the syntax page). Useful tokens to use as variables are special characters like |, &, ? -- generally anything not used elsewhere in the code. These are always parsed as single character tokens. In contrast, variables like n will require a space to push a number to the stack after. Numbers are essentially preinitialized variables.

As always, there are going to be statements which we can change, without affecting the end result. In golfscript, everything evaluates to true except 0, [], "", and {} (see this). Here, we can change the loop exit condition to simply {n} (we loop an additional time, and terminate when n=0).

As with golfing any language, it helps to know the available functions. Luckily the list is very short for golfscript. We can change 1- to ( to save another character. At present the code looks like this: (we could be using 1 instead of | here if we wanted, which would drop the initialization.)

It is important to use the stack well to get the shortest solutions (practice practice practice). Generally, if values are only used in a small segment of code, it may not be necessary to store them into variables. By removing the running product variable and simply using the stack, we can save quite a lot of characters.

Here's something else to think about. We're removing the variable n from the stack at the end of the loop body, but then pushing it immediately after. In fact, before the loop begins we also remove it from the stack. We should instead leave it on the stack, and we can keep the loop condition blank.

This leads us to our optimal while loop solution!

Now we still want to make this shorter. The obvious target should be the word while. Looking at the documentation, there are two viable alternatives -- unfold and do. When you have a choice of different routes to take, try and weigh the benefits of both. Unfold is 'pretty much a while loop', so as an estimate we'll cut down the 5 character while by 4 into /. As for do, we cut while by 3 characters, and get to merge the two blocks, which might save another character or two.

There's actually a big drawback to using a do loop. Since the condition check is done after the body is executed once, the value of 0 will be wrong, so we may need an if statement. I'll tell you now that unfold is shorter (some solutions with do are provided at the end). Go ahead and try it, the code we already have requires minimal changes.

Great! Our solution is now super-short and we're done here, right? Nope. This is 17 characters, and J has 12 characters. Never admit defeat!

Now you're thinking with... recursion

Using recursion means we must use a branching structure. Unfortunate, but as factorial can be expressed so succinctly recursively, this seems like a viable alternative to iteration.

Well that was easy -- had we tried recursion earlier we may not have even looked at using a while loop! Still, we're only at 16 characters.

Arrays are generally created in two ways -- using the [ and ] characters, or with the , function. If executed with an integer at the top of the stack, , returns an array of that length with arr[i]=i.

For iterating over arrays, we have three options:

The golfscript documentation has an example of using {+}* to sum the contents of an array. This suggests we can use {*}* to get the product of an array.

Well not quite. This doesn't handle zero correctly. We can calculate (n+1)!/(n+1) to rectify this, although this costs far too much.

We can also try to handle n=0 in the same bucket as n=1. This is actual extremely short to do, try and work out the shortest you can.

If we want to have the increment and multiplication in the same block, we should iterate over every element in the array. Since we aren't building an array, this means we should be using {)*}/, which brings us to the shortest golfscript implementation of factorial! At 12 characters long, this is tied with J!

Starting with a straightforward if solution for a do loop:

We can squeeze a couple extra out of this. A little complicated, so you'll have to convince yourself these ones work. Make sure you understand all of these.

A better alternative is to calculate (n+1)!/(n+1), which eliminates the need for an if structure.

But the shortest do solution here takes a few characters to map 0 to 1, and everything else to itself -- so we don't need any branching. This sort of optimization is extremely easy to miss.

For anyone interested, a few alternative recursive solutions with the same length as above are provided here:

*note: I haven't actually tested many of the pieces of code in this post, so feel free to inform if there are errors.

Works as an anonymous function:

If you want to give it a name, 6 characters:

I felt like learning a new language today, and this is what I landed on... (Why do I do this to myself?) This entry won't be winning any prizes, but it beats all 0 other answers so far using the same language!

Anyone who's journeyed around London will understand that instantly of course, so I'm sure I don't need to give a full explanation.

Most of the work at the start is in handling the 0 case. After initialising the product at 1, I can use that to calculate max(input, 1) to get the new input, taking advantage of the fact that 0! = 1! Then the main loop can begin.

(EDIT: A whole bunch of trips have been saved by stripping the 1 from "Heathrow Terminals 1, 2, 3" instead of generating it by dividing 7 (Sisters) by itself. I also use a cheaper method to generate the -1 in the next step.)

Decrementing is expensive in Mornington Crescent (although less expensive than the Tube itself). To make things more efficient I generate a -1 by taking the NOT of a parsed 0 and store that in Hammersmith for much of the loop.

I put some significant work into this, but since this is my first attempt at golfing in Mornington Crescent (in fact my first attempt in any language), I expect I missed a few optimisations here and there. If you're interested in programming in this language yourself (and why wouldn't you be?), Esoteric IDE - with its debug mode and watch window - is a must!
Share
Improve this answer
edited Sep 26, 2019 at 18:58
answered Sep 25, 2019 at 22:46

A standard definition in J:

There's no inbuilt product function in F#, but you can make one with a fold

Returns true in the case of n=0, but JavaScript will type-coerce that to 1 anyway.

The function itself takes only 21 characters; the rest is to bind it to a variable. To save a byte, one can also bind it to a digit, like so:

By making a range and multiplying it

C#, 20 or 39 characters depending on your point of view

As a lambda expression (20 characters, but see disclaimer; tested here):

If you recursion in a C# lambda, you obviously have to store the lambda in a named variable so that it can call itself. But unlike (e.g.) JavaScript, a self-referencing lambda must have been declared and initialized on a previous line. You can't call the function in the same statement in which you declare and/or initialize the variable.

In other words, this doesn't work:

There's no good reason for this restriction, since f can't ever be unassigned at the time it runs. The necessity of the Func<int,double> f=null; line is a quirk of C#. Whether that makes it fair to ignore it in the character count is up to the reader.

Nice, small, and fast code. Slightly golfed after writing explanation. I'll not change it, because it is just same code.

ㅅ commend change current stack. 색 change stack to 악 (or ㄱ) stack. ㅂ commend with ㅇ (like 뱅 or 방) get a number from STDIN. So 색뱅 get a number and store it in stack 악(ㄱ).

ㅃ commend duplicate upmost value in current stack, and ㅊ commend pop value from current stack and see if it is 0. If it is, it go to opposite direction from ㅓ indicate : in here right-to-left. If it is not, it go to direction where ㅓ indicate. So 뿌(\n)처 see if input is 0 or not, and go right if zero, and go left if not.

If input is zero, here is evaluated. (from 소 commend) First, change current stack to nothing(아). ㅁ commend is pop, and if used with ㅇ it print value as number. 희 halts program. So it print 1 and halt.

Look at this image for help. Here is main loop. ㅌ is subtraction, and ㄸ is multiply. ㅆ move value from current stack to selected one.

Put it shortly, it get number from nothing stack(or get 1), subtract to find if it is zero, and if not zero multiply and restart loop. And if zero, go to rightmost place of code with popping one number. 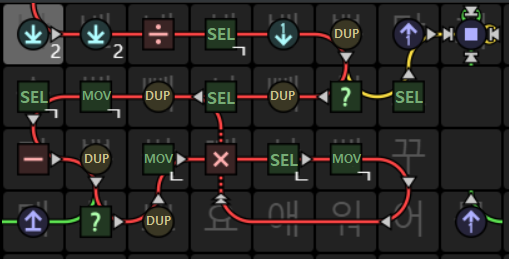 SEL is select, MOV is move, DUP is duplicate. This image is produced by AheuiChem, Aheui development tool in Korean. Translated with paint tool of windows.

Alternatively, a builtin answer is one byte:

A cooler (though longer version) is the templatized one which does it all at compile time (64 characters):

Eponymous templates are pretty verbose though, so you can't really use them in code golf very well. D's already verbose enough in terms of character count to be rather poor for code golf (though it actually does really well at reducing overall program size for larger programs). It's my favorite language though, so I figure that I might as well try and see how well I can get it to do at code golf, even if the likes of GolfScript are bound to cream it.

Most of the characters are ensuring that BigInts are used so the requirement for values up to 125 is met.

Computes 0! to be 1, and computes 125! in 0 seconds according to timer. Regular recursive approach

New version to beat common lisp: multiplies all elements of a list (same as that Haskell solution)

This is a recursive lambda. It returns True if the factorial is 1 (inputs 1 and 0), but that's allowed by meta.

Not the answer you're looking for? Browse other questions tagged code-golf arithmetic restricted-time factorial or ask your own question.