A challenge with simple rules but non-trivial algorithms. :-)

Take input in the form of space-separated integers:

Where N is the side length of a 2D square matrix filled with unique numbers (integers) between A and B inclusive. For each row and column in this matrix, the sum is always the same: S. (In other words, the matrix is a semi-magic square).

All numbers are positive. Exception is A, which can be 0.

a valid solution would be

a valid solution would be 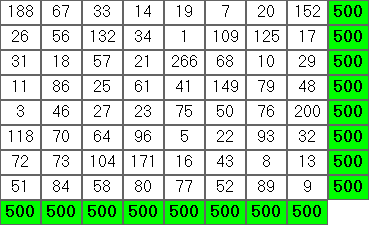 You output should be an ASCII table. Example for the first example above:

Right-aligned integers padded by spaces. The width of each column is the width of the largest integer in that column.

This is code-golf, so shortest code in bytes wins. Standard loopholes apply (especially about built-ins to solve this problem). You don't have to care about wrong or otherwise impossible inputs (including negative numbers). Please provide a sample output in your answer (mandatory) for the second example above.

This is a provably correct, non-deterministic approach.

On my desktop, the second test case generally finishes in less than 10 minutes.

The first case finishes instantly. Try it online in the CJam interpreter.

Without time limits, we could just randomly generate squares until finding a valid square. This approach builds on that idea, adding two optimizations:

Not the answer you're looking for? Browse other questions tagged code-golf math grid or ask your own question.

15
Generate a grid of sums
24
Fill the Screen with Wang Tiles
25
Fibonacci-style matrix expansion
14
Find every digit from the largest column
14
Produce Dürer's magic square
14
Do Matrix Multiplication!
17
Sign change, loop and display with minimal padding
18
Is magic possible?
18
Complete the grid-filling meander
13
Is this board Latin-style?