Prime numbers have always fascinated people. 2300 years ago Euclid wrote in his "Elements"

A prime number is that which is measured by a unit alone.

which means that a prime is only divisible by 1 (or by itself).

People have always looked for relations between prime numbers, and have come up with some pretty weird (as in "interesting") stuff.

For example a Sophie Germain prime is a prime p for which 2*p+1 is also prime.

A safe prime is a prime p for which (p-1)/2 is also prime, which is exactly the backwards condition of a Sophie Germain prime.

These are related to what we are looking for in this challenge.

This means that we start with a prime p and calculate q=2*p+1. If q is prime too, we have a Cunnigham chain of type I of length 2. Then we test 2*q+1 and so on, until the next generated number is composite.

Cunningham chains of type II are constructed following almost the same principle, the only difference being that we check 2*p-1 at each stage.

Cunningham chains can have a length of 1, which means that neither 2*p+1 nor 2*p-1 are prime. We're not interested in these.

Some examples of Cunningham chains

The next constructed number would be 95 which isn't prime.
This also tells us, that 5, 11, 23 and 47 don't start any chain of type I, because it would have preceeding elements.

2 also starts a chain of type II of length 3.

Next would be 9, which isn't prime.

Let's try 11 for type II (we excluded it from type I earlier).
Well, 21 would be next, which isn't prime, so we would have length 1 for that "chain", which we don't count in this challenge.

Bear in mind, that n might be part of a previously started chain of any type, in which case it shouldn't be considered a starting number of a chain of that type.

Let's look into how this begins

We start with 2. Since it is the first prime at all we can be sure that there is no chain starting with a lower prime that contains 2.
The next number in a chain of type I would be 2*2+1 == 5. 5 is prime, so we have a chain of at least length 2 already.
We count that as the first chain. What about type II? Next number would be 2*2-1 == 3. 3 is prime, so a chain of at least length 2 for type II too.
We count that as the second chain. And we're done for 2.

And so we check on for 5, 7, 11 and so on, counting until we find the nth Cunningham chain of at least length 2.

Then (or maybe some time earlier ;) ) we need to determine the complete length of the chain we found and print the result in the previously mentioned format.

By the way: in my tests I haven't found any prime besides 2 that started both types of chains with a length greater than 1.

A list of the first 5000 outputs can be found here.

This is code golf. Arbitrary whitespace is allowed in the output, but the type and numbers should be seperated by a single space and a colon as seen in the examples. Using any loopholes is not allowed, especially getting the results from the web is not allowed.

3 f: counts the chains (for loop) then display the result

for loop: for each number the Cunningham chain (I then II if needed) is valid if 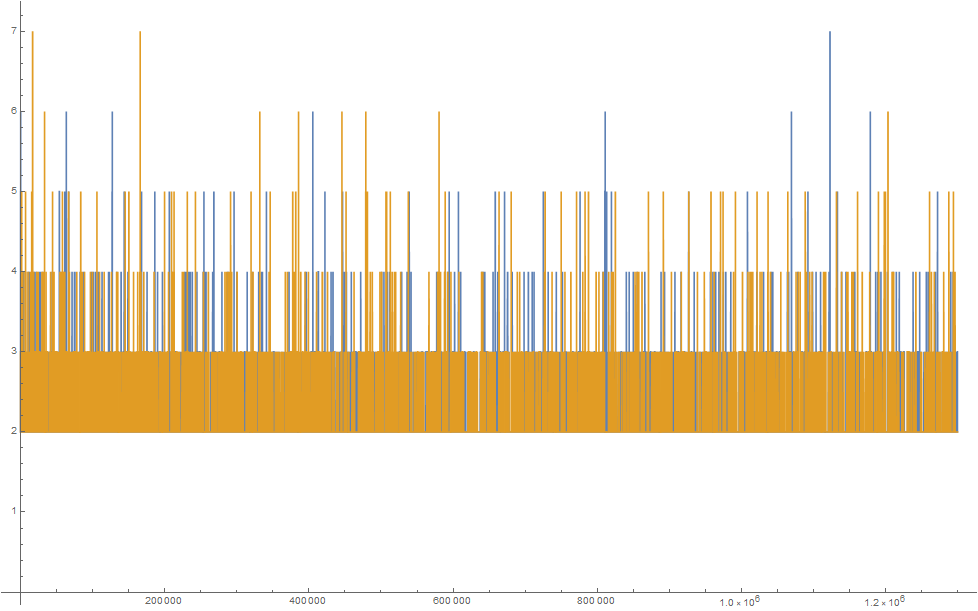 Not the answer you're looking for? Browse other questions tagged code-golf primes or ask your own question.