Tied the world record! (Please don't cheat the rankings there.)

The above hexdump can be reversed with xxd -r -c 18 > fizzbuzz.bg.

Compression has been done with Python's zlib, which uses the DEFLATE format but obtains a better ratio than (g)zip.

After unfolding and with colour-coded execution paths: 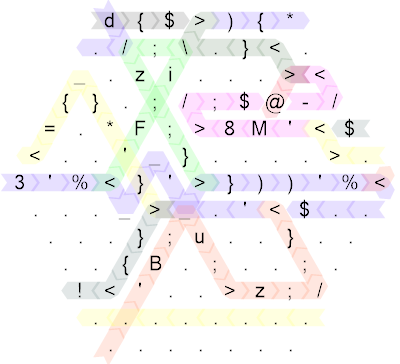 Finally got around to finishing this. I had written an ungolfed solution weeks ago, but wasn't entirely happy with it so I never actually golfed it. After revisiting it the other day, I found a way to simplify the ungolfed solution slightly, and while I think there might still be a better way to approach the problem in general, I decided to golf it this time. The current solution is far from optimal, and I think it should actually fit in side-length 6 instead of 7. I'll give this a go over the next days, and when I'm happy with the result will add a full explanation.

On vimgolf.com we have the classic Remember FizzBuzz?, which is similar to this, but keeps the numbers on all the lines. There's also Neither Fizz nor Buzz, which uses a similar format, but provides a useful input file. Those small differences drastically change the optimal solution. I did exactly this same variation 2 years ago in the edit to this reddit post. I had to check whether visual increment (not available back then) creates an improvement, like it has for the other variations, but it looks like it hasn't.

The shortest approach I've found yet. Perhaps there's a better one; suggestions are welcome. This was originally flagged ES6, but this works in ES5, and to my knowledge there's not a shorter way with ES6 features.

Here's another attempt, using .slice and some complicated maths for a total of 66 bytes:

(Thanks to Ben Fortune for a couple of handy tricks!)

I was quite bored... Not too efficient, but fun!

The inner loop iterates over ((3 "Fizz") (5 "Buzz")) for each i and, according to the result of the two consecutive mod operations, eventually prints:

fresh-line is a nice little function that as far as I know is only found in Common Lisp. It adds a newline only if necessary, and returns T only when the newline was added. For the above situations, according to whether we printed something or not, the return values of (fresh-line) are thus respectively:

So I know that the integer must be printed only when we did not print a fresh-line. But if I print the integer, I must also print a newline after it. That's why there is a DO.

DO is a basic yet almighty looping construct that iterates until a condition is met. Here, the condition is the return value of (fresh-line). It it tested before each iteration of the body of the loop, notably the first one. So if the test returns T, then we exit the DO. Otherwise, we execute the body, which prints the integer. Then, we execute the test once again and this time, it returns T because current line is "dirty" (there is an integer printed now).

How does it work, you ask? ... I have no idea. I might edit in a full explanation at some point if I ever decide to try to understand this again.

I do not think that this could be golfed any further. Thanks to branislav for helping me golf this.

Cell indexes in comments are in hexadecimal to match numbering in bfdev debug view.

Despite being golfed, all you have to do is to add a bit of horizontal whitespace and a few comments to get possibly one of the clearest and most readable FizzBuzzes ever. (Vertical whitespace is significant in BuzzFizz, apart from (by popular demand) the trailing newline, so it's necessary even in a golfed program.)

In addition to the commands seen in the FizzBuzz program above, BuzzFizz also supports input (if you use an identifier like a with no leading $, the program will ask for its value; you can use a statement like clear a to reset the value so that the program asks for it again the next time it's used). Other than that, the above program shows off all the features of the language; in other words, we have a complete language built entirely out of the operations you need to write a simple FizzBuzz program (thus the name).

Despite its inspiration, BuzzFizz is not specialised merely for FizzBuzzes; you can take the FizzBuzz program apart, put it together in other ways, and solve a surprisingly large range of problems. For example, the Esolang page for the language has a primality tester and a program which adds two positive numbers. (The primality tester is simpler than the addition program; given BuzzFizz's choice of operator, this probably shouldn't be too surprising.)

NOTE: This is a reply to @anatolyg's really clever 2015 answer, with a few tweaks to reduce the score by 7 bytes. I'm only submitting this as a separate answer because it wouldn't be possible to explain fully in a comment.

Almost as short as Java. This is just the trivial answer generated by another program, This is still a computer generated answer, but I am sure there are way shorter solutions! The general idea is initializing the cells to 4 B F i u z. If the program has to output a number, it just goes to the first cell and manipualtes it, if it is one of the letters, it will just jump to the corresponding cell and output it.

This has one unprintable, so here's a hexdump:

Try it online. (note that it is very slow)

Japt is a shortened version of JavaScript.

It's shorter than other CL solution and it uses different method. Conditions are handled inside format function.

-5 bytes - shorter version of handling i=0

-3 bytes - ~^ with only one parameter seems to work as if second parameter was 0, which is saves 2 bytes. Last byte is saved by substituting ~% by <enter>

I'm sure this could be golfed, but I think this is a good start.

Try it in this online interpreter.

Tries to combine the printing of Fizz and Buzz. Ends up at 88 bytes.

Vertical rendition of the above

Same sort of logic as my R answer

Undeclared variables are zero by default, so i=0 can be omitted. The three line breaks are required.

After a long time I tried to use JS again...

Thanks to @ShadowCat we made it to 79 bytes: