Programming with Bits and Bytes

In this challenge you are going to write an interpreter for a simple language I've made up. The language is based on a single accumulator A, which is exactly one byte in length. At the start of a program, A = 0. These are the languages instructions:

This instruction simply inverts every bit of the accumulator. Every zero becomes a one and every one becomes a zero. Simple!

This instruction shifts every bit in A one place to the right. The leftmost bit becomes a zero and the rightmost bit is discarded.

This instruction shifts every bit in A one place to the left. The rightmost bit becomes a zero and the leftmost bit is discarded.

That's all the instructions! Simple, right?

Here are some small programs to test out your submissions. Before the arrow is the code, after it is the expected result:

The internal representation of the accumulator is an integer. This integer is mod-ed by 256 on each iteration, as desired. The operations performed are -G-1, G/2, G*2 and G converted to base 16, reversed, and converted back to base 10, where G is the accumulator.

I missed the line about ignoring everything else. This has been remedied. Thanks, @Dennis.

Basically it's just a collection of nested ternary expressions. I'm incrementing the value obtained from getchar() so that an EOF (-1) results in a value of zero and the program exits.

Uses a dictionary to make up for a lack of switch-case syntax in Python. See more here.

The accumulator is a string which is converted into a base 10 number at the end.

Pretty much as short as it can get. Defines an anonymous function which takes the program as input.

Thanks to @vihan for suggesting the use of reduce to save a byte.

Wow, this has been golfed down a LOT! Thanks to everyone who gave me suggestions! I greatly appreciate it!

Golfed 31 (!) bytes by optimizing the nibble swap with bitwise operations as opposed to lengthy Integer.??? methods.

Golfed 72 (!!!!) chars by removing the unnecessary string created to swap nibbles. Much better than before!?

Golfed 45 (!!) chars by removing use of java.util.Scanner and reading from System.in directly. Note that now that the lambda expression is gone, Java 8 is no longer required! Just merely Java 1 would do!

Golfed 15 (!) chars by converting shifts to multiplication and division, removing the braces from the while statement, and making a local within the main method.

Ungolfed 9 =( chars because of a problem with the left shift not discarding the leftmost byte. Therefore, I now do mod (256). The right shift will make the resulting number one bit shorter than before, so there is no need to use mod on right shift. My nibble-swap thing will swap the last 4 bits and the second-last nibble, and the and (&) truncates all other bits. My inversion program doesn't cause any problems if the original number is less than 256.

Golfed 31 35 chars thanks to @Geobits by converting switch statement to a lot of ternary statements, and also converting chars to ints, shortening the literals.

Golfed 1 char by adding brackets to the outside of the ternary statement and doing %256. That way, the %16 is unnecessary in the left-shift part of the nibble swap. The brackets add 2 chars and the %16 saves 3 chars.

Golfed 3 chars by changing class to interface and removing public using Java 8's static interface method feature. Thanks to @TheNumberOne (no comment, but find his answer on "Tips for golfing in Java"

Surprisingly short for Rust. Nothing else really interesting other than the fact that I learned more precedence rules today—who knew (a>>b)|c is the same as a>>b|c?

Shaved off a byte by changing n>>=1 to n/=2; however, the same cannot be done with multiplication, because arithmetic overflow is a panic (i.e. crash) in Rust.

Purely for giggles, here it is for the HP 41C/CV/CX calculator. (Requires either the Extended Functions module, or a 41CX for the ATOX function.) The calculator doesn't report program sizes in bytes, unfortunately.

Put your program into the Alpha register, which is a little tricky, as there's no way to enter ! or @ directly from the keyboard (use XTOA with the ASCII codes 33 and 64 respectively to append them).

Steps 08 and 10 allow for ignoring invalid opcodes; remove them to save 2 steps, but the program will crash on invalid input.

I realized that I have done something very similar to this in Python earlier. This is just a port of my Ruby answer, but it is incidentally the shortest Python answer as of now :D

The difference from the Ruby version is that this one doesn't ignore invalid instructions while iterating over the input. Instead I take advantage of the fact that Python tends to return -1 instead of nil when there is no match -- The current value of a is appended to the back of the result array, so that all invalid instructions maps to the same, unchanged value.

EDIT (read shameless copying)
Saw the other answer in python (by Beta decay). It uses a really effective way to simulate switch cases using dictionary. Using that we can write

More of a comment on @Doorknob's answer, but I don't have any rep for comments as I just created an account.

One can shave 10 bytes off his Rust solution with the following:

#f and #f0 are hexadecimal numbers for the nibbles, .byte converts an integer into a byte. I'm lucky that Byte's .string attribute already uses the unsigned representation of a byte. Ceylon also features a switch statement without fall-through, and a string is a list of characters, which can be iterated.

I also tried to cut those long shift method names down by using an aliasing import, but this actually becomes 7 bytes longer:

This might be useful if we need those methods a bit more often.

Does not work with the online interpreter and requires the non-free default interpreter. This would be somewhat easier with actual bitwise operations, but I don't think they're too useful for most of the common uses of STATA.

BITWISE AND is used to constrain our Number type to a single byte.

This is an anonymous function that accepts a string and returns an integer. To call it, assign it to a variable.

As an unnamed function returning the accumulator value

Bonus: you can pass an initial value of the accumulator. If not passed, starting value is 0 as by specific.

Inspired by @Beta Decay's use of a string accumulator, seeing as lua has no byte type. Could probably be golfed more by using fewer functions.

The input should be entered as a string on level 1.

I might be able to do better in k5, but it's a complex series of tradeoffs- for example, converting binary to decimal is as easy as 2/, but the behavior of ? makes it harder to handle a default case for instruction lookup.

It's not that it gonna beat many answers, it's only for practice 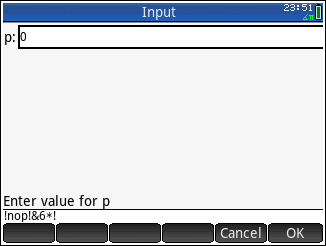 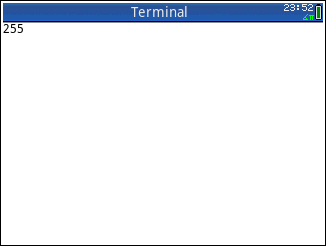 This answer ensures that the HP Prime uses unsigned 8 bit integers even if the mode is set to e.g. 64 bits by the user. If the calculator is set up manually to using unsigned 8 bit decimal integers, then the pragma command can be omitted. If the output does not need to follow the format strictly then the a*1 at the end can simply be a. Multiplying the result by 1 just ensures the output does not follow the internal output for integer values. The print command in line 4 can also be omitted if the terminal does not need to be cleared before printing out the result. If passing the program as a string argument is allowed, then the INPUT command can be omitted as well.

This is the shortest version with input and proper output, without the pragma argument (if the calculator is set to Uint8 by default:

Other versions I tried, but need more bytes:

Having code in strings to be evaluated looks pretty dirty, but works :D

Here's the output (and input actually..)

And yes, it's really running on a RaspberryPi :) 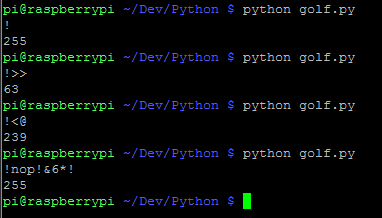 Not the answer you're looking for? Browse other questions tagged code-golf interpreter bitwise or ask your own question.