Randomize points on a disc

I read about circles somewhere, and just now learned about discs (it's actually a pretty common concept) and thought about codegolf.

Your task is to randomize a point/several points on a disc with the radius 1.

This solution is not rejection-based. I'm generating the points in polar coordinates, but with a non-uniform distribution of the radii to achieve a uniform density of the points.

Why does it work? Consider a narrow annulus of radius r and (small) width dr. The area is approximately 2π*r*dr (if the annulus is narrow, the inner and outer circumference are almost identical, and the curvature can be ignored, such that the area can be treated as that of a rectangle with side lengths of the circumference and the width of the annulus). So the area increases linearly with the radius. This means that we also want a linear distribution of the random radii, in order to achieve a constant density (at twice the radius, there is twice as much area to fill, so we want twice as many points there).

How can pick one of the four values with the desired distribution? We can stack them up, pick a uniformly random value between 0 and 1 on the y-axis and pick the segment at that point:

There's a different way to visualise this picking though. We could instead replace each value of the distribution with the accumulation of the values up to that point:

Cool, so how can make use of this to generate a linear distribution of radii? This is the distribution we want: 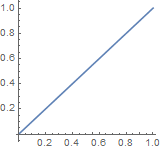 The first step is to accumulate the values of the distribution. But the distribution is continuous, so instead of summing over all previous values, we take an integral from 0 to r. We can easily solve that analytically: ∫0r r dr = 1/2 r2. However, we want this to be normalised, i.e. to multiply it by a constant such that this gives 1 for the maximum value of r, so what we really want is r2: 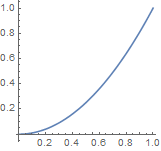 And finally, we invert this to get a function we can apply to a uniform value in [0,1], which we can again do analytically: it's just r = √y, where y is the random value: 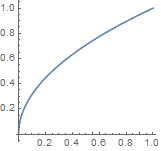 This is a fairly useful technique that can often be used to generate simple distributions exactly (it works for any distribution, but for complicated ones the last two steps may have to be solved numerically). However, I wouldn't use it in this particular case in production code, because the square root, sine and cosine are prohibitively expensive: using a rejection-based algorithm is on average much faster, because it only needs addition and multiplication.

Many thanks for David Carraher for letting me know about RandomPoint, which saved 24 (!) bytes. Mathematica does have a built-in for everything.

This plots the point and the bounding circle to qualify for the bonus: 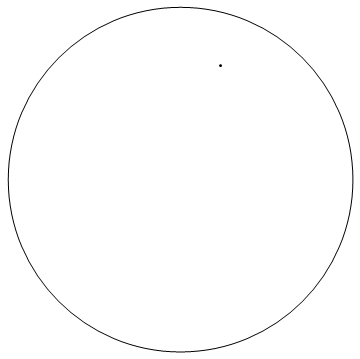 The result is a vector image, so the size specification of 201x201 pixels doesn't really make sense, but by default it does render larger than that.

This works by repeatedly generating random points in a square of side length 2 and keeping the first that falls inside the unit disc.

Thanks to @MartinBüttner for golfing off 3 bytes!

Nothing particularly special, but I suppose we ought to have at least one graphical solution: 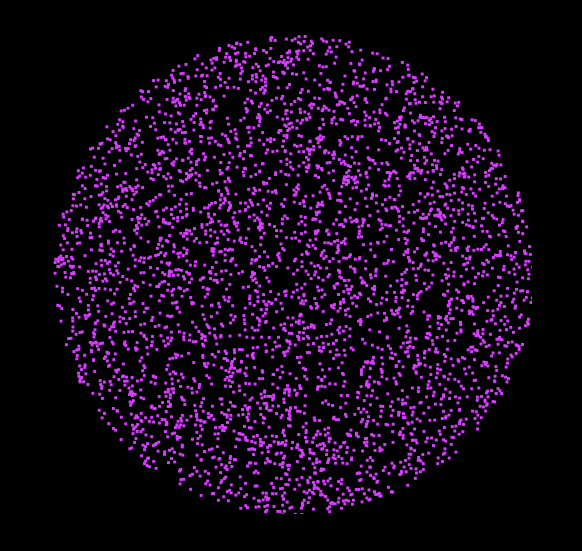 Try it in your browser.

Edit: I can shave off two bytes by applying @MartinBüttner's approach for modifying the distribution of polar coordinates. I think it's also quite a bit more direct:

This is just a simple solution, generating points in a square and rejecting those too far away. My singular golfing trick is to include the assignments inside of the condition.

Edit: In the process of golfing, I found an interesting way to print random points on a circle.

Generates 501 equally-spaced theta values plus one random number and scales them all to [0..2π]. Then generates 501 1's for the radius of the circle, plus a random radius for the point and takes the square root to ensure uniform distribution over the disc. Then plots all the points as polar coordinates. 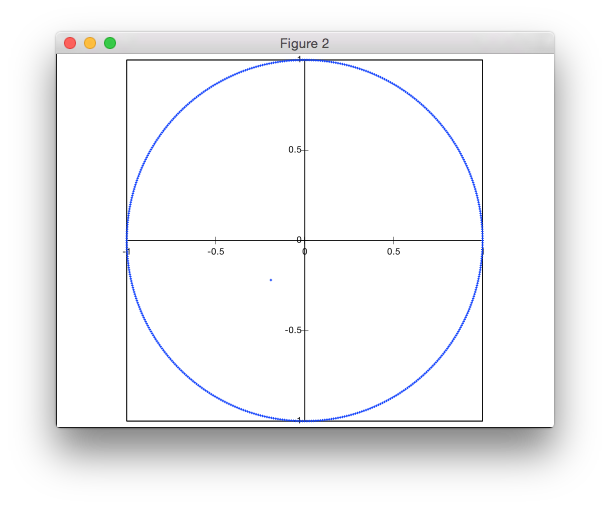 Here is a quick demonstration of the distribution (without the unit circle): 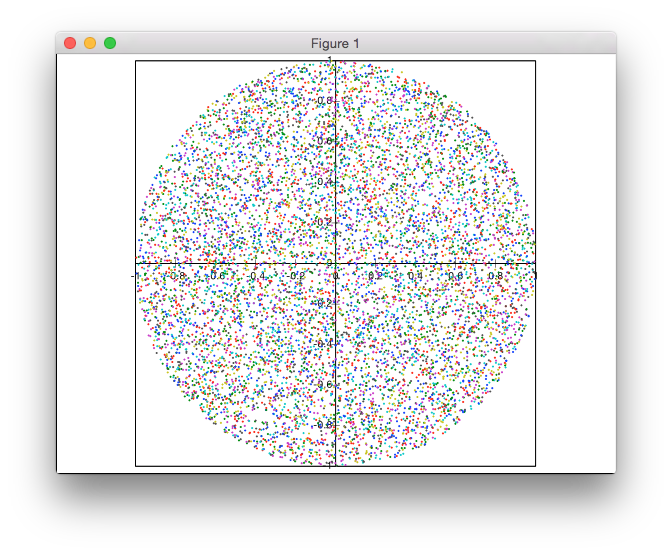 Takes the number of coordinates to generate on stdin, and outputs them on stdout like such:

Uses a strategy similar to @MartinBüttner, generating polar coordinates and radii, except it does it using complex exponentiation.

Direct method, 74 bytes (thanks to Martin Büttner for helping me correct two errors):

Use the complex number construction to build the x/y's from polar coordinates. Taking the input was a bit expensive and there is probably a better way to do this. The ylim and xlim is to ensure the entire circle is plotted and the asp ensures the points are shown under the circle symbol.

the requirement for 201*201 being the minimum size requires me to put in the setup method since Processing.org defaults to 200x200 :(

Takes user input and draws the disc and points. Tested on QB64.

This is a pretty basic "throw at the dartboard and keep what sticks" strategy. The catch is that "what sticks" is not determined mathematically but graphically: a white disc is plotted on a black background, and then randomly generated points are rejected until they are not black. The points themselves are drawn in blue (though it's hard to tell when they're single pixels--click on the image to enlarge).

Since i wasn't quite sure about the rand()<.5 part, I did some distribution testing with this, using this script:

which for an input of 1e7 gives me this result, after I sipped once or twice at my coffee:

which I think is quite alright.

A little explanation:
After scribbling about for a while it turned out, that if you want to divide the disc into four rings with equal area, the radii where you would have to cut are sqrt(1/4), sqrt(1/2) and sqrt(3/4). Since the actual radius of the point I test would be sqrt( x^2 + y^2), I can skip the square rooting all together. The 1/4, 2/4, 3/4 "coincidence" might be related to what M. Buettner pointed out earlier.

Example for 10000 points (including timing in seconds for the real device): 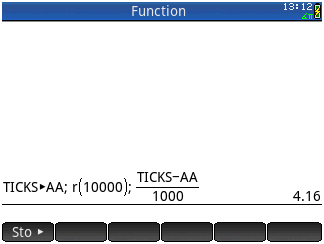 The function itself is called by r(n). The rest in the image above is only for timing purposes. 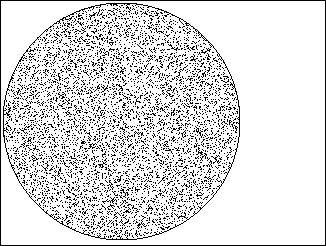 The version above does not store the point coordinates, so I wrote a version that takes two parameters r(n,p). n is the number of points and p=0 returns the points to the terminal, p=1 plots the points and the disc), in case storing coordinates is mandatory. This version is 283 (308-20-5) bytes long: 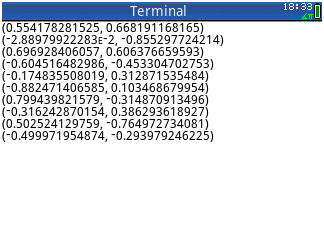 r(10,1) shows the disc with the points, like shown above.

This also freed me to remove the parentheses.

Not the answer you're looking for? Browse other questions tagged code-golf math graphical-output random or ask your own question.

104
Draw the national flag of France

14
Circle Through Three Points
89
Make a circle illusion animation
28
Play the Chaos Game
12
Fractal Points on a Line
22
Randomize the test
13
Trilaterate your position
29
Verify a Tower of Hanoi solution
15
Sort the points by linear distance in a 3D space
16
Conway's Game of Points!
19
Determine Circles