What is average character?

Strings are arrays of bytes. Average character of string can be found by calculating the average of the ASCII values of characters in string and taking corresponding ASCII character.

This is code-golf, so shortest answer (in bytes) in wins.

This is my first participation in a code-golf, please be gentle! It does work but brainfuck can't handle floats (not that i know of) so the rounded value is always the bottom one (might fix my algorithm later).

Also, the algorithm averages the values 2 by 2, meaning it could be innacurate in some spots. And I need to fix a bug that is printing a number at the end of the output too.

Pretty straightforward. Using s+.5 instead of rounding, because for some reason round(0.5, 0) is 0 in Python.

12 bytes as an expression

or 15 bytes as a function

If I use round() instead of int(.5+ etc., it saves one character but is technically not in compliance with the challenge: Python's round() rounds halves to the nearest even integer, not upwards. However, it works correctly on all sample inputs.

Can be seen here

I can't believe there's no JS answer with this technique yet...

Solution produced through some collaborative golfing at work.

Edit: oh, misread the spec. `0: is needed to print the result to stdout. Waiting for clarification on input re. Dennis' question.

With each new character, updates the character sum s and the number of characters i to compute and append the average character.

This creates an unnamed function that accepts a string and creates a vector of its ASCII code points. Means are taken for each sequential group, rounded to integers, converted to characters, joined into a string, and printed to STDOUT.

With apologies to w0lf, my answer ended up different enough that it seemed worth posting.

$<.bytes iterates over each byte in stdin, so we print the rolling average in each loop. '%c' converts a float to a character by rounding down and taking the ASCII, so all we have to do is add 0.5 to make it round properly. $. is a magic variable that starts off initialized to 0--it's supposed to store the line count, but since here we want byte count we just increment it manually. 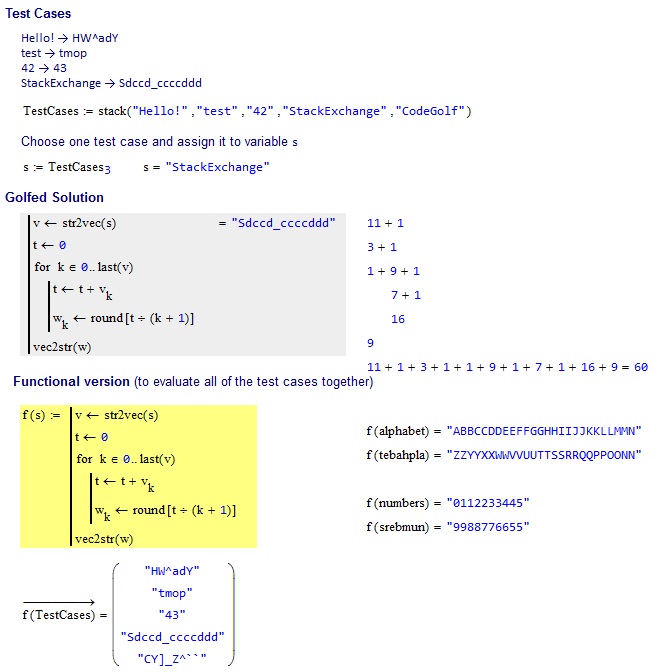 Mathcad is mathematical application based on 2D worksheets comprised of "regions" each of which can be text, a mathematical expression, program, plot or scripted component.

A mathematical or programming instruction is picked from a palette toolbar or entered using a keyboard shortcut. For golfing purposes, an operation ("byte") is taken to be the number of keyboard operations necessary to create a name or expression (for example, to set the variable a to 3, we would write a:=3. The definition operator := is a single keypress ":", as are a and 3 giving a total of 3 "bytes". The programming for operator requires typing ctl-shft-# (or a single click on the programming toolbar) so again is equivalent to 1 byte.

In Mathcad the user enters programming language commands using keyboard shortcuts (or picking them from the Programming Toolbar) rather than writing them in text. For example, typing ctl-] creates a while-loop operator that has two "placeholders" for entering the condition and a single line of the body, respectively. Typing = at the end of a Mathcad expressions causes Mathcad to evaluate the expression.

(Count bytes) By looking at it from a user input perspective and equating one Mathcad input operation (keyboard usually, mouse-click on toolbar if no kbd shortcut) to a character and interpreting this as a byte. csort = 5 bytes as it's typed char-by-char as are other variable/function names. The for operator is a special construct that occupies 11 characters (including 3 blank "placeholders" and 3 spaces) but is entered by ctl-shft-#, hence = 1 byte (similar to tokens in some languages). Typing ' (quote) creates balanced parentheses (usually) so counts as 1 byte. Indexing v = 3 bytes (type v[k).

The biggest solution so far, but based on php it can't get much shorter I think. 2 bytes could be saved by removing the newlines.

As I don't have enough reputation to comment on cb0's answer to provide him hints to improve his answer (mainly using the char index method in a string and while to loop through a string). But I still bothered to post it due to the large reduction in byte count.

I didn't find a way though to use the <?= shortcut and avoid undefined errors without using command line flags (this is why i used $i=$b=0;). This answer does not work in PHP 5 due to the ?? syntax.

Which is still a lot. It's clear that a huge painpoint in brev is the type converting (chars to integers, strings to lists etc).

Thanks to @beaker for 9 bytes off!

Much like many other answers here, I'm summing and averaging in a loop. Just here to represent Java :)

My original code is a 97, but it only returns the modified char[] rather than printing it:

Now, it's just long enough for scrollbars to appear for me, so here's a version with some line breaks, just because: