(Note: I know that the VSEPR method fails sometimes, and that there are exceptional molecules. The challenge is about the molecules which conform.)

Most people who have taken an introductory chemistry course know about molecules, and (probably) the VSEPR theory of chemical bonding. Basically, the theory predicts the shape of a molecule given three main properties:

For example, a molecule which has 1 lone pair and 3 atoms bonded to the main atom is AX3E1, which is the trigonal pyramidal configuration. (There is always only 1 central atom, so A never has a subscript.)

Your job is, given a string representing a covalent chemical compound, to output the shape of that molecule. "But wait!", exclaim the exasperated programmers, "you can't expect us to input all of the molecular data for every element!" Of course we can, but as that wouldn't be fun, we'll only consider the compounds formed by the following 7 elements:

The input is any molecule composed of the above 7, such as CO2 or SF4, that is in the form AXN, where A and X are each one of the above seven element symbols, X is not C or N, and N is a number between 2 and 6 inclusive.

The output should be the name of the geometric shape of the molecule, for example "linear".

The following (don't get scared, I swear they're less than they seem!) is a list of all possible configurations along with their AXE number and a drawing of how they look (adapted from Wikipedia's nifty table): 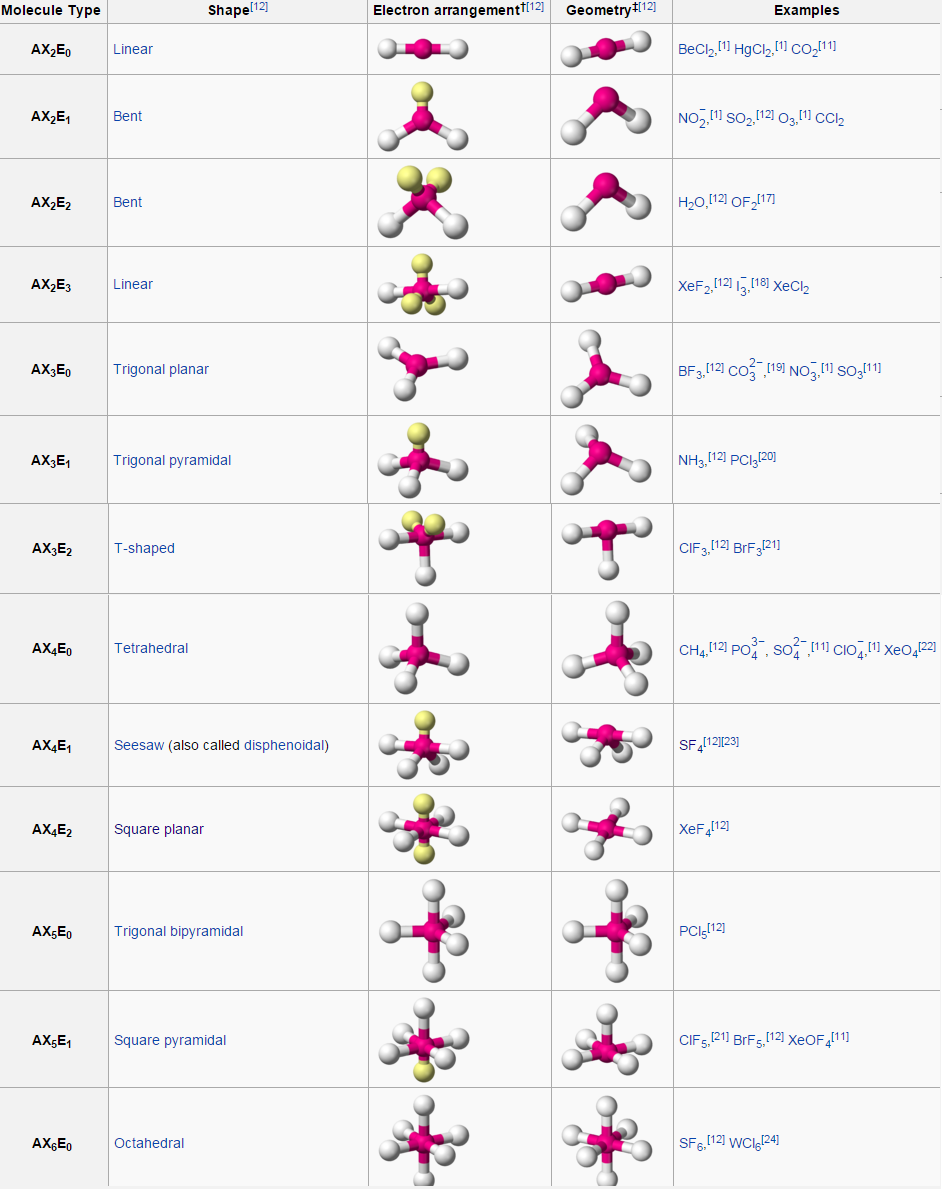 Notes:
- We won't consider compounds in which the first element has a subscript other than 1, such as C2H4.
- Standard loopholes apply.
- This is a code golf, so the shortest answer wins (obviously)

Note that with the rules as they are, AX2E3 and AX4E2 are not possible with the given elements, so they are not supported. All test cases passed.

13
Electron Configuration Diagrams
6
Calculating dehydration synthesis results
9
Build a Mass Spectrometer!
7
Is this molecule polar?
7
Find the Oxidation States
12
Find the Mr of a Given Compound!
11
Degree of Unsaturation
8
Determine if a substructure is present in a chemical structure using SMILES string (substructure fingerprint)
6
Find the Block on the Extended Periodic Table Using the Diagonal Rule
13
How Many Atoms?