Calculate the Orthocenter of a Triangle [duplicate]

Try to write the shortest program or function you can that prints or returns the calculated orthocenter of a triangle. 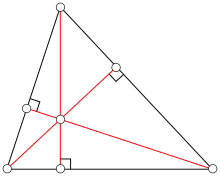 A sample input would be

and a sample output would be:

One formula for orthocenter can be written as

Should work for any valid triangle...

CJam isn't really optimized for geometry, so the code isn't doing anything fancy. It uses the parametric representation for two of the lines passing through a corner and being orthogonal to the opposite side, and solves the 2x2 system of equations resulting from intersecting the two lines. Well, it only needs one of the resulting parameters, which is then used for calculating the intersection point.

Note that some of the signs in the intermediate values are wrong. Instead of flipping them with additional code, I kept them the way they are, and corrected for the wrong sign by changing additions to subtractions (or vice versa) when the value is used later. For example, if you see a + where you would normally expect a - when calculating a determinant, that's because one of the terms has the wrong sign. In fact, both determinants have the wrong sign (at least relative to my paper notes), but that doesn't matter because they are divided by each other.

Since the input format was not precisely specified, I made it CJam friendly. The code expects 3 points in CJam array format, where the values have to be floating point. For the given example, the expected input is:

Edit Vectorized it a lot

Not the answer you're looking for? Browse other questions tagged code-golf geometry or ask your own question.

13
The centers of a triangle

13
The centers of a triangle
40
Check if point lies inside triangle
15
Spherical excess of a triangle
13
Calculate the Fermat Point of a Triangle
35
Evaluate the aspect ratio of a triangle
18
What are my dimensions?
27
Draw A Reuleaux Triangle!
30
Golf the smallest circle!
21
Perimeter of Conway hexagon