Square numbers are those that take the form of \$n^2\$ where \$n\$ is an integer. These are also called perfect squares, because when you take their square root you get an integer.

Write a program or named function that given an input (parameter or stdin) number \$n\$, calculates the \$n\$th square triangular number and outputs/returns it, where n is a positive nonzero number. (For \$n=1\$ return 0)

For the program/function to be a valid submission it should be able to return at least all square triangle numbers smaller than \$2^{31}-1\$. 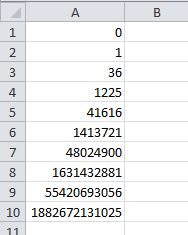 ∇¨⍵-⍳2 apply the function (∇) to the two previous values

Uses the same recurrence relation as the CJam answer. There's probably a better way to do this.

it can theoretically output square triangular numbers of any size, but list intersection causes a stack overflow for anything above 3.

Instead of n uses f£, which is optimized for infinite lists.

Getting numbers takes a long, long, long time after 4.

Input in rcx output in rax. You can use debugger to test it.