Pazaak is a card game from the Star Wars universe. It is similar to BlackJack, with two players pitted against each other trying to reach a total of twenty without going over. Each player has a "side deck" of four cards of their own that they can use to modify their score.

Edit: Neptor has been disqualified for cheating. Scores will be fixed as soon as possible...

Will be updated as soon as possible.

Round One - Nestor vs Bastila & Austin Powers vs The Cincinnati Kid 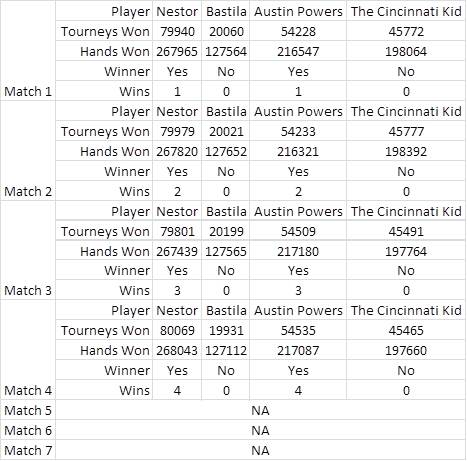 Round Two - Nestor vs Austin Powers & The Cincinnati Kid vs Bastila 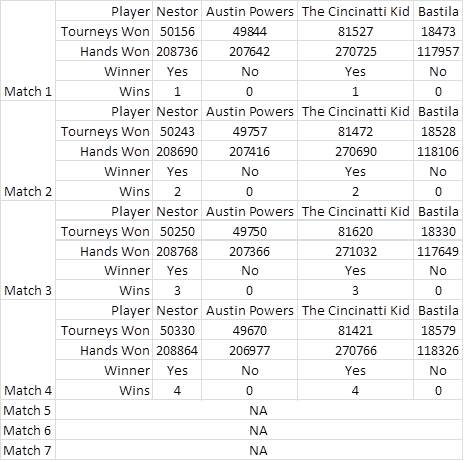 Gameplay is done in turns. Player one is dealt a card from the main (house) deck. The house deck holds forty cards: four copies of one through 10. After being dealt a card, they can choose to end their turn and receive a new card next turn, stand at their current value, or play a card from their side deck and stand at the new value. After player one decides what they want to do, player two repeats the process.

Play continues like this until one player wins the game. Games are played in best-three-out-of-five sets.

In the Star Wars universe, Pazaak involved gambling. While inclusion of such a system would add more of a dynamic to the game, it is a bit complicated for a first-time KoTH competition.

"Real" Pazaak side decks were also provided by the players themselves, and could include many different card options such as negative cards, positive-or-negative cards, flip cards, double cards, and tiebreaker cards. These would also make the game more interesting, but would require a gambling interface in place, and would require far more out of the competitors. In this Simple Pazaak game, each player gets the same side deck: two copies of one through five, from which four are randomly selected.

Depending on the success of this game, I may put forth the effort to develop an advanced version wherein which gambling and custom side decks are possible.

The players of this game will be bots designed by you. Each bot needs to extend the Player class, import the Mechanics package, and reside in the players package like so:

The card to play is obviously only of importance if you set the action to PLAY. It takes a Card object. If the Card object you pass to it does not exist in your side deck, your bot will STAND instead.

The parameters your bot receives each turn are:

Your bots may only use the information that is given to them via the getResponse method. They should not attempt to interact with any other class. They may write to a single file to store data between rounds. They may have any custom methods, properties, etc. as desired. They should run in a reasonable amount of time (if the program run is not practically instantaneous, I will notice something is wrong).

If you find some kind of exploit in the code, you will be rewarded for "turning yourself in." If I notice the exploit first, I will fix it, and you will get no reward.

The controller is not needed to write a bot, as everything is already explained in this post. However, if you wish to test, it can be found here: https://github.com/PhantomJedi759/simplepazaak Two basic bots are included. Neither should hold up well against an "intelligent" opponent, as they only choose between END and STAND. Here is a sample run of what they do:

Because these bots rely purely on the luck of the draw, their win-loss ratios can vary drastically. It will be interesting to see how skill can combat the luck of the game.

This should be everything you need! Go build some bots!

The main deck is forty cards: 4x1-10 It is reshuffled at the beginning of each hand.

A player's side deck has four cards, selected randomly out of 2x1-5. The side deck persists between hands.

Matching is handled so that each player will have to play 100,000 games against every other player.

In the Pazaak Cup, elimination-style rounds will narrow down who the best Pazaak bot really is. Each pairing of bots will play for the best four-out-of-seven sets of 100,000 games. Whoever wins four will move up the ladder to the next opponent, and the losers will stay down to battle for sequential rankings. This style of gameplay is the most fair, as bots cannot "win-farm" certain opponents to compensate for lack of ability against others. The Pazaak Cup will be held on Friday, July 3, provided there are at least eight submitted bots. The winner will receive Correct Answer status and a starting bonus in Advanced Pazaak, which will hopefully be ready close to the same time as the Pazaak Cup is held.

Try to make sure that we draw another card if we know we're losing, otherwise look at our side deck and the overall scores to decide what to do.

Updated to do a better job of handling situations where the opponent has already finished playing. In my own testing this now seems to be the best candidate again, at least for now.

Austin Powers, as you might presume, likes to live dangerously. Unless someone has busted, or he can guarantee a win, he will always hit if he's behind, or has a better than 20% chance of not busting.

Bastila plays conservatively. To her, a 17 is just as good as a 20, and it's much better to stand short than bomb out.

Nestor loves getting 20 using his side deck, but when that fails he calculates his expected payoff by choosing stand or end, assuming that the opponent is sensible.

Glaucus makes 100 simulations with a shuffled list of cards and chooses his best option based on these simulations.

Behold! A bot of my own design. HK-47 tries to kill all the meatbags he can, though he is a little trigger-happy with his side deck cards.

Statement: Indeed, I am most eager to engage in some unadulterated violence. At your command of course, Master. - HK-47

So far, he can beat everyone but The Cincinnati Kid.

Neptor is sorry, Neptor cheated. Neptor really was going to come clean, he just wanted to have some fun first :(

Not the answer you're looking for? Browse other questions tagged king-of-the-hill java card-games or ask your own question.