In the error outputs of some languages such as Java, a pointer is shown to give the programmer an idea of exactly where the error went wrong.

Take this example on Ideone:

Notice the caret shows where the invalid code is?

Your challenge is: given number N and string S, place a pointer on the Nth character in S.

Apostrophe in PRINT forces a new line, then just have to move the cursor to correct position.

Here's mine, it's pretty simple.

It points at the seventh character.

This is a pretty horribly golfed answer, but it's my first attempt at code golf.

This is as short as I can go from something like this:

After seeing @Digital Trauma's answer, I wanted to port his answer to Perl to show an another example of accepting the input numbers as unary as a default. This is based on the meta discussion.

First post, so I guess it's not that good.

This is my first code golf, but here I go.

The regular version being

So, not really much change. Clearly, the replicate is wasting the most space here, but as far as I know there are no alternatives in Prelude. I played a bit with other things which could have been cool tricks, but they all ended up being the same length.

putStrLn is needed so that the newline will be displayed as a newline instead of "\n" (in GHCi only).

I know I'm VERY late to this party, but whatever.

^ is the only non-alphanumeric character (with \) to not be assigned to a command, so no need for a string literal to push it.

This is my first ever code golf, so if you have any tips, that would be great!

Assumes S is a string on the stack. N should be given in unary. It should be a sequence of : in between the ) and ! on the second line. For example:

Unlike a previous answer of the same byte count, this does not require the input to be in unary.

Memory addresses -8 and -9 are memory-mapped for numeric and character IO respectively.

In terms of pictures, I've split it up into: Most of the program, and the End 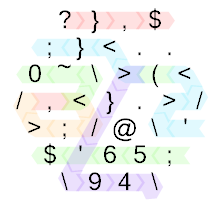 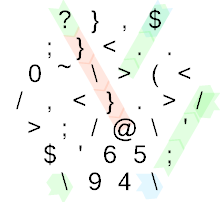 Starting from where purple left off, I was lucky that the program basically worked itself out. It ends up not changing the 94 in memory until it prints it, and then eventually makes its way to a blank space that hadn't been used and so I put the stopping point there and it all worked out. Fun challenge!

Unfortunately, the online demo has a bug that I need to fix with newlines, so I can't put a demo link.

This is pretty simple:

Thanks to manatwork this just got shorter by 5 bytes. Looks like I need to refresh my Lua skills.

49
Tips for golfing in Perl?