UPDATE: The gist-files are updated (including new submissions) as the Controller.java did not catch Exceptions (only errors). It does now catch errors and exceptions and also prints them.

This challenge consists of two threads, this is the catcher thread, the cat thread can be found here.

This is an asymmetrical KOTH: Each submission is either a cat or a catcher. There are games between each pair of each a cat and a catcher. The cats and the catchers have separate rankings. 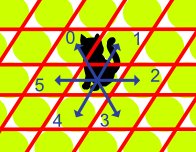 Achilles isn't too bright but he is ruthlessly efficient. First he stops the cat from using the wrap around of the board, then he divides the board into two. Then he keeps on dividing the part of the board the cat is in into half until the cat is trapped.

Agamemnon splits the cats area in half with a vertical line until the cat only has a strip of width 2 to move in, at which point he traps the cat.

This catcher does consistently better than Achilles and I think he's different enough to warrant a new answer. 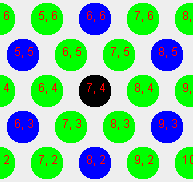 This is what HexCatcher tries to achieve. It mentally tiles the field with these big hexagons in a way that each corner cell is part of 3 big hexagons.

If there is a chance to keep the cat in the current area by connecting two corners next to the cat, the bot will do that. (E.g. in the image if the cat is at 7,5 we choose 7,6 even if only the 6,6 and 8,5 cells are occupied yet.)

If the previous is not an option we chooses to play a corner which is a part of the area where the cat is. If all such corners are already chosen (like in the image) we choose a cell next to the cat.

Multiple small improvements are possible such as handling wrap-around better (the tiling breaks there) or doing the last couple moves optimally. I might do some of these. If it is not allowed, I will just append it (out of competition) for the ones interested.

How he tries to catch the cat:

He analyzes all squares of the board and tries to find the square that minimizes the openness of the board, and maximizes how much the board is strung out; in relation to the cat. The openness and stringiness of a board are computed using a modification of his famous algorithm.

The openness of a board relative to a position is the number of reachable positions from that position.

The stringiness of a board relative to a position is the sum of the distances between the reachable positions and the position.

Now, he is much better at catching FreeCat and his own cat all cats. Unfortunately, he is also much worse at catching the crazy uncooperative cats. He could be improved by detecting if the cat is one of the crazy ones and then acting as CloseCatcher.

Chooses one of the positions where the cat could step in the next step. It chooses the one which would give the most possible paths after 3 steps for the cat if it would move there and the field wouldn't change.

Code is almost identical to my Cat entry, FreeCat, which chooses the direction in a very similar way.

Places a bucket in front of the cat, or if that is taken, places behind.

Uses the same scoring mechanism as my ChoiceCat entry. There is a little modification which helps to choose relevant cells at the first few steps as ChoiceCat doesn't care about the first few buckets as it doesn't see them as threat.

ChoiceCatcher seems to score considerably better than the current catchers.

This was made just for testing the controller and just randomly places the buckets (very inefficiently).

This was made just for testing the controller. It just fills up column by column until the cat is caught.

Not the answer you're looking for? Browse other questions tagged king-of-the-hill hexagonal-grid java asymmetric or ask your own question.