Compute the Resistance of a 4 Band Color Coded Resistor

Resistors commonly have color coded bands that are used to identify their resistance in Ohms. In this challenge we'll only consider the normal 4-band, tan, axial-lead resistors. We'll express them as:

Each of xyzt represents a letter that abbreviates the color of the band:

So, for example, NKOg is some particular resistor.

The resistance can be calculated with the help of this table: 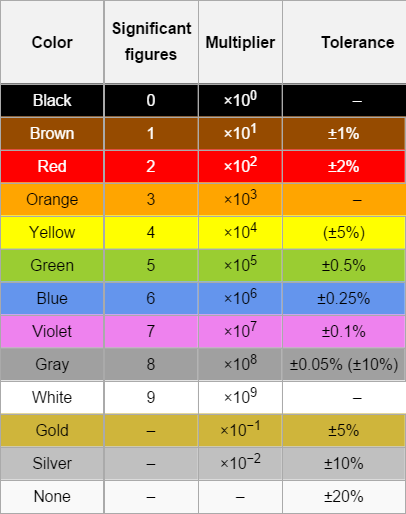 As the table suggests:

(Here's a handy resistance calculator that deals with exact same set of resistors we are.)

The resistance is 10 * x + y times the z multiplier, to a tolerance of the t percentage.

For example, to calculate the resistance of NKOg, we see that:

Write a program or function that takes in a 4 character string of the form xyzt and prints or returns the resistance in the form [resistance] Ω ±[tolerance]%.

I started out in Python, but

Thanks to nimi, I shaved off another 2 bytes.

Not the answer you're looking for? Browse other questions tagged code-golf arithmetic or ask your own question.

10
Calculating Resistance (Nerd Sniping)
4
Build an evaluator for nontrivial resistance diagrams
23
Resistors of Unusual Value
24
Fill the Screen with Wang Tiles
11
Can you make my terminal less boring?
20
Remove an unobstructed rectangle
18
Draw the Ingress glyphs
11
Let's play Rummikub!
21
Chop off the matrix to get the desired sum