This challenge is about the game Tic Tac Toe, but it's played on a torus.

To create the necessary game board, you start out with a regular Tic Tac Toe game board. First fold it into a cylinder by joining the left and the right edge. Then fold it into torus by joining the top and the bottom edge. Here's a simple visualization of such a game board with a few moves played (Sick Paint skills!). 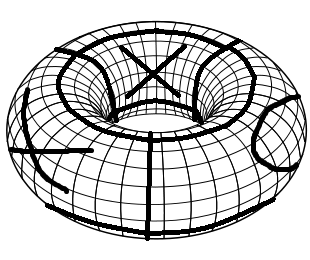 The rules of Tic Tac Toe on a torus are the same as regular Tic Tac Toe. Each Player place alternating Xs and Os. The first one with 3 same symbols in a row, a column or a in a diagonal wins.

Since a torus is quite hard to visualize, we simply project the board back onto a paper. Now we can play the game as regular Tic Tac Toe. The only difference is, that you can also win with 3 same symbols in a broken diagonal. For instance Player 1 (X) wins the following board. You can see this easily by changing the view on the torus a little bit.

If your interested, you can play Tic Tac Toe on a Torus at Torus Games. There's a Windows, Mac and Android version.

The optimal strategy is really easy:

Every optimal game consists of exactly 7 moves and these moves can be described in the following way:

Using this digit notation we automatically generated an order. Now we can sort all of the 1728 optimal games and we get the list:

This list is part of your job. You will receive one number k between 0 and 1727 and you have to return the kth game in digit notation of that sorted list.

Write a function or a program, that receives the number k (integer) computes the correspondent game. You can read the input via STDIN, command-line argument, prompt or function argument and print the result (7 digits) in a readable format (e.g. 0123845 or [0, 1, 2, 3, 8, 4, 5]) or return it using an string (human readable format) or an integer (containing all digits in base 10), or in any array/list format.

The challenge type is code-golf. Therefore the shortest code wins.

A function returning a string. Edit Found an arithmetic solution for function M (at last!)

Very naive , it can be shortened in many ways. It simply enumerates all the possible legal values and returns what find at place n. The M function returns the position in between two cells, that is the mandatory move to block an opposite player.

A full program, and takes way too much time and memory to complete for any input. Also, the code includes some 18.0 features that aren't yet available on TIO. The TIO link includes a faster version using only features up to 17.1, so that the output can be checked.

Given two positions, extract their row and column numbers. For each dimension (row/column), if the numbers are the same, so is the result; otherwise, the result is the third number. In both cases, the result coordinates can be found with the following property:

The resulting code is as simple as the following.

How the code works

Decided to post as a separate answer, because the approach is drastically different.

Inspired from orion's comment, this one generates all optimal games by transforming a single game board in various ways.

The 3x3 toroidal board is very very permissive on its transformations; the three-in-a-rows are preserved through reflection, rotation (e.g. cycling the top row to the bottom), and shear (e.g. cycling elements of each row 0, 1, 2 units to the right respectively). With this information, I could identify four seed boards that have distinct topology (using 0 to 6 to denote the seven moves made in sequence):

Then I tried various combinations of the transformations to find a short one that generates all 1728 boards. And I noticed that even the seed boards can be generated from one board, by swapping the positions of 1-3 (decides whether the 4th move is forced) and 5-6 (swap a block and a win).

The only relevant change is that we never check if the current player can win, only check the opponent's possibility to win the next turn. As the only turn the player 1 can win is turn 7, this is the only place when the algorithm would produce game that is not optimal, but it's very easy to filter such a situation out. We simply verify each game generated if it's won by player 1 - if it was not, the move in turn 7 was incorrect, so we don't add this game to optimal games table.

(Exactly half the games generated by this rule are false ie. in the 7th turn the player 1 always has two possibilities to block player two, but only one will make him win instantly).

Not the answer you're looking for? Browse other questions tagged code-golf game tic-tac-toe or ask your own question.

8
Noughts and Crosses (aka Tic-Tac-Toe)
18
Lose at tic-tac-toe
8
Graphical, networked, two-(human)-player Tic-Tac-Toe
32
Tic-tac-toe with only crosses
9
Print this tic-tac-toe board!
48
Is this Tic-Tac-Toe board valid?
15
Tic-Tac-Toe - X or O?
26
Determine Tic-Tac-Toe winner (round based)
12
Scoring Quantum Tic-Tac-Toe