An L-system (or Lindenmayer system) is a parallel rewriting system that, among other things, can be easily used to model fractals. This question concerns deterministic, context-free L-systems. These consists of an alphabet of symbols, an initial axiom string and a set of rewrite rules mapping each alphabet symbol to a new string. The rules are applied to the axiom in parallel, generating a new string. This process is then repeated.

For example, the system with the axiom "A" and the rules A=ABA;B=BBB generates the sequence of strings "ABA", "ABABBBABA", "ABABBBABABBBBBBBBBABABBBABA", etc. For conciseness, we don't explicitly mention the alphabet when defining the L-system. Furthermore, any symbol without an explicit rewrite rule is assumed to be unchanged (i.e. the default rule for a symbol A is A=A).

L-systems can be visualised using a form of turtle graphics. By convention, the turtle starts facing to the right. A string is then drawn by iterating over its symbols: an F means "draw forward one unit", a G means "move forward one unit", a + means "turn left one angle unit" and a - means "turn right one angle unit". All other symbols in the string are ignored. For the purpose of this question, the angle units are assumed to always be 90°.

Given a specification of any L-system and a number of iterations, your program should output an ASCII rendering of the resulting string (as described above) using box-drawing characters.

Other examples to test your program with include:

The first two of which look as follows (produced using @edc65's answer): 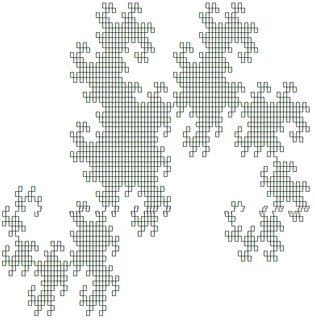 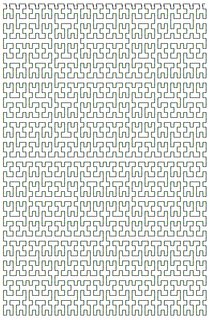 You can test out any of the systems at this page.

This challenge was inspired by Draw a Random Walk with Slashes. In fact, it's possible to represent a random walk as an L-system if we extend the system to allow multiple rules per symbol, with the expansion chosen non-determistically during rewriting. One formulation is:

Another common extension, often used when modeling plants, is to interpret the [ and ] characters as pushing and popping the current position and angle. Most plants use angles smaller than 90°, but here is one example that doesn't:

Neither of these examples need to be supported in this challenge.

This challenge is also similar to "Sorry, young man, but it's Turtles all the way down!". However, that challenge used line rendering rather than ASCII and allowed a more flexible syntax.

Not the answer you're looking for? Browse other questions tagged code-golf string ascii-art fractal or ask your own question.

22
"Sorry, young man, but it's Turtles all the way down!"
27
Map string to Hilbert curve
14
Draw a Random Walk with Slashes

8
Random Sentence Generator
22
"Sorry, young man, but it's Turtles all the way down!"
8
Check for occurences of string in other string
17
Fixing a logic system
25
Generate a Stack Exchange Favicon
47
Determine if a coin system is Canonical
3
My program knows your language. Does yours?
20
Parse ascii art math!
12
Implement a 2-tag system simulator
21
Verify a Superpowerset