Noel Constant did it without genius and without spies.

This was Noel Constant's system:

He took the Gideon Bible that was in his room, and he started with the first sentence in Genesis.

And then he looked for corporations with those initials, and bought shares in them. His rule at the beginning was that he would own shares in only one corporation at a time, would invest his whole nest-egg in it, and would sell the instant the value of his shares had doubled.

The investor Noel Constant is getting tired of using his system manually. He needs the power of computers to pick the companies to invest in.

Noel Constant is willing to learn how to execute a command line script or a function in the language of your choice. He will provide a single string of input. He won't bother removing any whitespace, punctuation, or change case for the input string. He doesn't like that kind of work.

His company, Magnum Opus, provided a list of company names and their initials for you: https://gist.github.com/britishtea/2f57710a114cfd79616d.

As you may have guessed, Noel Constant doesn't like reading, so he'll want the shortest program or function possible.

To clarify, the input to the function or program is string (with punctuation and whitespace, case unaltered). An example of such a string is "In the beginning God created the heaven and the earth." The list of company names and initials is not an input source, it should be read some other way (from disk for example).

The output is a list in the above format. I forgot to mention in the original challenge that the order the company names appear in shouldn't be altered, i.e. if you read the initials in the output from top to bottom it renders the original input (stripped of punctuation and whitespace).

This is no longer a requirement, but if your function or program satisfies this condition, there is a 0.9 bonus (# characters * 0.9) in it for you.

(Not counting downloading and parsing the Bible)

I am not a professional investor but I think that the more times a company is mentioned in the Bible the more successful it will be, so I would invest in these:

(Future founders, consider creating a company with stock symbols I marked with *, they are not yet taken) 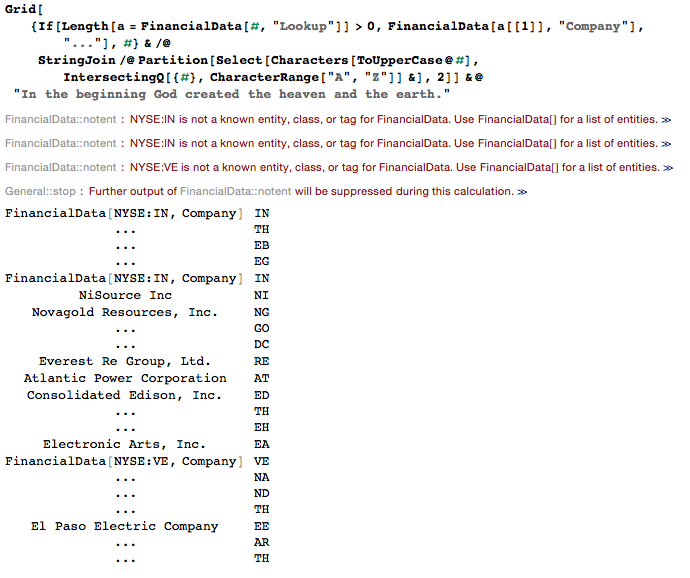 This actually doesn't quite work, but I think it's pretty neat that Mathematica can do this. For some reason, though, it has trouble finding its own stocks. For example, it finds "NYSE:IN" but then says it's not a known entity:

Still, that's about as far as I think I'll go with it, unless someone knows why it's confused about the NYSE stocks. Feel free to expand or golf.

Rereading the rules, the company names can be in a file. This works with a file named w (No file extension) in the same format as the github.gist in the question. Takes input via stdin and outputs in the format company name (SC) or ... (SC) where SC is the stock code.

This is the same as above, except it gets the stock codes from the internet.

The goo.gl link is the link to the gist shortened.